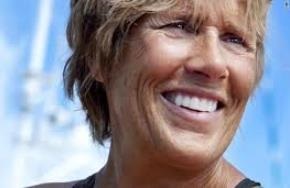 Diana Nyad made history earlier this year when, at 64, she became the first person to complete the marathon three-day swim from Cuba to Florida without a protective shark cage. She achieved her dream after four previous attempts, which had all failed due to inclement weather and jellyfish attacks.

As she walked ashore she told the cheering crowd, “You are never too old to chase your dreams”. Rather than letting her age dictate her actions, Diana Nyad is one of those extraordinary people who continue to ask what have I yet to do? without ever thinking I couldn’t or I shouldn’t .

Watch Diana Nyad’s interview with Ellen DeGeneres as they discuss what kept Diana going during her swim.