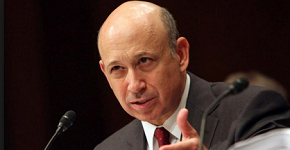 ‘Cheer up Australia’, was the message from Goldman Sachs CEO, Lloyd Blankfein, as he spoke at a business conference in Sydney last week.

As head of Goldman Sachs throughout the global financial crisis, Blankfein is seen as a controversial figure in the finance industry. His company wholeheartedly embraced the complicated financial products which were linked to the collapse of the subprime market, which had dire consequences for investors, governments, businesses and financial institutions the world over.

“The bail-outs and the banks, that’s a very political issue as one would expect it to be … and a very big burden on the social fabric and the culture of the United States and around the world,” Blankfein told his audience. Lamenting the US’s stifled growth, he attributed this to the reluctance of policymakers to make decisions because the risks were so high.

During a question and answer session, the focus turned to Australia and its ‘perceived’ lack of economic growth and political dysfunction, as expressed by some commentators. To this he responded, “I’ve been coming here for a long, long time, and during the last two decades of growth, growth, growth, and people are always distraught, overwrought, wringing their hands about how horrible things are and to my observation, they don’t look that bad.”

When asked about the growing frustrations between business and government in Australia, which has led to a slowing economic growth compared to the US, which is seeing a slight improvement in its growth, his somewhat facetious response was, “No it’s awful, you’ve now sunk to a level that we’re trying to get up to, so my heart goes out to you.”

Opinion: Who’s got it wrong?

Businesses in Australia are doing it tough, so are families, pensioners and just about everyone you ask. So why then do those outside Australia perceive us as ‘lucky’?

It’s always interesting when those from overseas see fit to comment on the political and economic landscape of Australia. Almost all of the time they refer to our stable economy, democratic political landscape and a future which is promising. So why then do we in Australia fail to share their optimism? Is it that we simply thrive on doom and gloom? Or is the reality of life somewhat harsher than it appears on paper?

Those who profess to know all about Australia’s AAA rating, continued resources boom and favourable trade position, gather their knowledge and form their opinions based on balance sheets, financial reports and budget predictions. Indeed, just last week as Lloyd Blankfein was telling Australia to ‘cheer up’, the Federal Government was looking for ways to balance the books as it became apparent that revenue predictions made in the May budget were billions short and the expenditure much higher.

As Lloyd Blankfein was ushered into Friday’s conference in Sydney surrounded by security, did he get the opportunity to see some of those Australians who have lost their jobs, homes and self-respect since his institution’s irresponsible investing changed the financial landscape? Did he meet any pensioners struggling to survive on the meagre amount of Age Pension handed out to them in lieu of the investment returns they had been expecting pre-GFC? Or did he come face-to-face with any family business owners who have had to stop trading because the demand for their goods and services had simply vanished? I think not.

Yet Mr Blankfein sees fit to swan into Australia, no doubt flying first class and staying in the best hotel Sydney has to offer, and tell us to ‘cheer up, things are not that bad’! And on paper he may be right, perhaps we are more pessimistic than we need to be, perhaps we simply can’t see the wood for the trees. Or perhaps we have a tighter grip on reality than the head of Goldman Sachs.

Are Australians too pessimistic when it comes to our economic outlook? Should we be more optimistic and consider ourselves more fortunate than others?