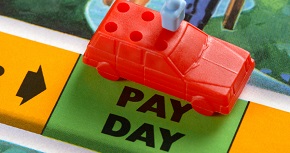 It may be tempting to take up the offer of a ‘payday loan’, but this is often the most expensive way of borrowing money. New laws make the actual costs more transparent.

Small loans of less than $2000, which you must repay in 15 days or less, can no longer be offered. If you see such products advertised, or are offered these products, then you should contact the Australian Securities and Investments Commission (ASIC).

Small loans of less than $2000, which are offered over terms of between 16 days and one year, must display a warning which notifies you of your options.

From 1 July 2013, fee limits are now capped on small amount loans of $2000 or less. Credit providers can only charge the following:

Authorised Deposit-taking Institutions (ADIs) such as banks, building societies and credit unions are exempt from the above and continuing credit contracts, such as credit cards, are excluded.

Find out more about small amount loans from Moneysmart.gov.au.

Medium amount loans and all other loans
From 1 July 2013, the fees and charges which are applied to loans of $2001 to $5000 in value, and which are to be repaid over a period of 16 days to two years, have been capped as follows:

ADIs such as banks, building societies and credit unions are exempt from these fee caps.

Find out more about the changes to laws surrounding personal loans.