In the town of Goulburn in southern New South Wales, an energy revolution is brewing. The community has come together to build its own 4000-panel solar farm – everyday citizens are invited to buy shares in the venture and reap the rewards.

Goulburn is not alone – community-owned energy is an idea whose time has come. About 100 community energy groups operate across Australia – their projects at various levels of development – up from 25 groups in 2015.

The concept is gaining political attention, too. Independent MP for the federal Victorian seat of Indi, Helen Haines, in August moved a motion in parliament, calling on the Morrison government to support community energy, including establishing a new government agency. The bill is backed by fellow independent Zali Steggall.

At its core, community energy rests on the belief that everyday people should have power over how their energy is generated – including its environmental and social impacts. Big corporations should not control our energy systems, nor should they reap all the profits. So let’s take a look at how community energy works. 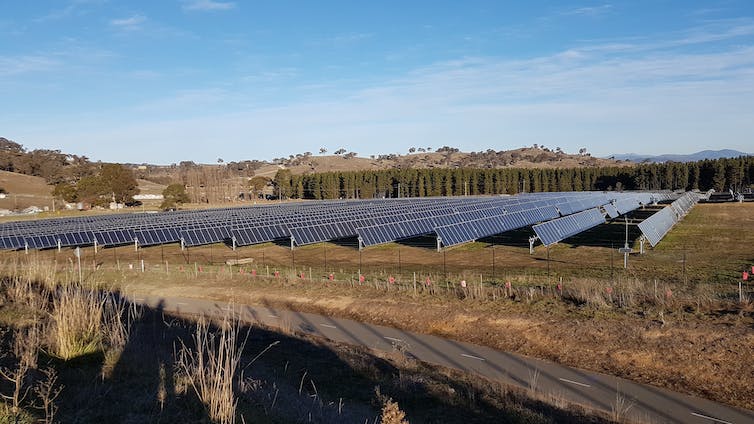 Projects such as the ACT’s Mount Majura solar farm allow citizens to take control of their energy needs. Steve Bittinger/Flickr

What is community energy?
Australia’s first community-owned renewable energy project, Hepburn Wind, started generating power in June 2011. Since then, many more communities across Australia have banded together to manage their own solar, wind, micro-grid and efficiency projects.

The Goulburn project will be built in the Hume electorate of federal energy minister Angus Taylor, about three kilometres from the town centre. Earlier this year it received a $2.1 million state grant, under the Regional Community Energy Fund.

Investors can reportedly buy $400 shares, each covering the cost of a solar panel and the infrastructure needed for grid connection.

Hepburn Wind and the Goulburn Solar Farm, for example, involve a community investment model in which local groups develop a project, then seek investors from the community to fund it.

This might involve forming a cooperative, or selling shares in the venture. The community organisation may take responsibility for delivering the project – including design, installation, and management – or may outsource this to an external company.

A second model involves raising money through donations, either via crowd-sourcing platforms or traditional means. The money is usually spent on installing a sustainable energy system at local premises. For example, in north-east Victoria, a First Nations-owned renewable energy project will deliver solar power to the office of a state government agency.

The third type of project involves a group of households coming together to find a renewable energy solution, such as bulk-buying solar energy.

What are the benefits?
Community-owned renewable energy projects are a great way for everyday people to get involved in the transition to a low-carbon future. The benefits include:

Empowering the community
The energy transformation is not just about moving from fossil fuels to renewables. It’s also about changing who is responsible for, and benefits from, our energy system.

Inevitably, those in power, such as existing energy generators and their political supporters, will resist such change.

We’ve seen this play out in Australia, which has triggered more than a decade of climate policy inaction. More recently, the Morrison government has pushed ahead with a plan for a ‘gas-fired’ economic recovery, despite the harm this will cause to our emissions reduction efforts. These developments are clearly at odds with community support for action on climate change.

Traditionally, communities are often shut out of decision making on energy projects, including renewables. Communities often become dependent on both local political representation to voice their views, and the capacity of energy network operators to work with them. 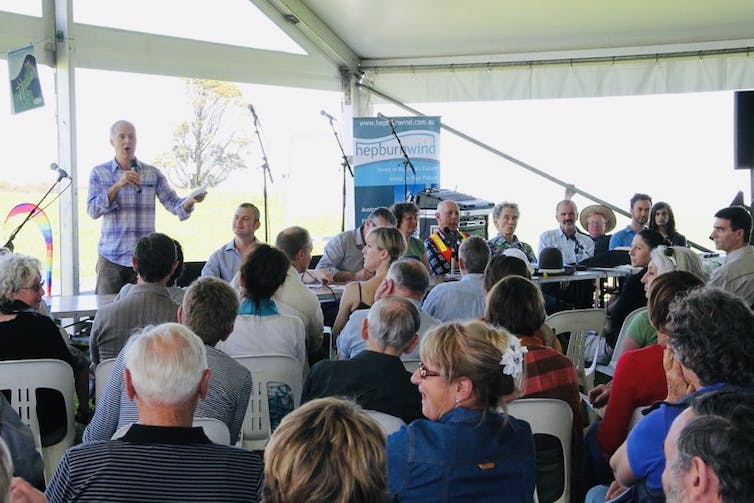 In community energy projects, locals are involved from the ground up. Flickr

Communities must be empowered to take part in planning, and have ownership of projects. Our research, soon to be published, shows such empowerment involves helping communities develop the capacity and power to meet their own energy goals. This means developing new skills, working together and becoming equal decision makers.

Governments are central to this by helping communities deliver projects. The Victorian government’s Community Power Hubs are a good example. At three ‘hubs’ – in Ballarat, Bendigo and the Latrobe Valley – various types of energy projects were implemented. Each sought to build local knowledge of, and participation in, community energy, and ensured the benefits stayed in the region.

The energy transformation will require massive investment, and most projects will be built in regional communities.

Empowering community energy is the ideal way to provide some of that investment, build stronger rural economies and ensure the benefits of the energy transformation are shared by all.

Are you supportive of community-based power generation projects? What about the PM’s plan for a gas-fired economic recovery?

Stores are seeing fewer cash transactions and want to see even less.

Trying your hand at the stock market? Be careful where your information is coming from.