In 1948, as Cecil George Harris lay dying after a tractor accident, he scratched a final message into the vehicle’s fender. illustration supplied by: Impact Studios/Dinalie Dabarera. Katherine Biber, University of Technology Sydney

When a man died by suicide in 2016, a friend found an unsent SMS on his phone:

Dave Nic you and Jack keep all that I have house and superannuation, put my ashes in the back garden with Trish Julie will take her stuff only she’s ok gone back to her ex AGAIN I’m beaten. A bit of cash behind TV and a bit in the bank Cash card pin 3636 MRN190162Q 10/10/2016 My will

Following a dispute between the man’s widow and his brother and nephew, the Supreme Court of Queensland decided the message was a valid will.

The case represents a growing body of legal decisions reflecting how the digital age is challenging the courts.

Read more: Five things to do before you die – because planning your eventual demise takes preparation

The changing definition of the word ‘document’
The courts have had to consider whether DVDs and digital videos , iPhone notes , Microsoft Word documents , encrypted computer files and other digital artefacts count at valid wills or amendments.

In the UK, the Law Commission is reviewing the law of wills to decide whether it should reflect the ubiquity of digital technologies.

Except in very limited exceptional circumstances, a will is a document. To be a valid formal will, there are certain requirements: it must be in writing, on paper, signed by the testator, witnessed by other people, and formally executed. Specific formal language is encouraged.

In law, documents – more than witnesses or physical objects – have become the most important form of evidence.

But in the digital age, the distinction between a document, a witness and real evidence is becoming more difficult to perceive, and pointless to sustain.

What we understand as a ‘document’ has expanded to include a potentially limitless range of digital forms and devices.

The case of the unsent SMS
The Supreme Court of Queensland had no difficulty in finding that the unsent text message was a document. However, it was not a formal will. Informal wills can still be valid in some circumstances. The court noted that the unsent message was identified as a will, dated, contained the deceased’s initials and date of birth (“MRN190162”).

It identified most of his assets, included clear wishes about their distribution, provided a pin code and gave instructions about his ashes.

The court also considered his state of mind at the time of his death, determining he had sufficient capacity to make a will. It considered the fact the man didn’t send the text message: did it mean that his will was still in draft form and did not reflect his final wishes?

The court accepted evidence that he did not send the message, so that his family would not interrupt his suicide. Despite lacking nearly all the formalities of a will, it was found to be his valid last will and testament. 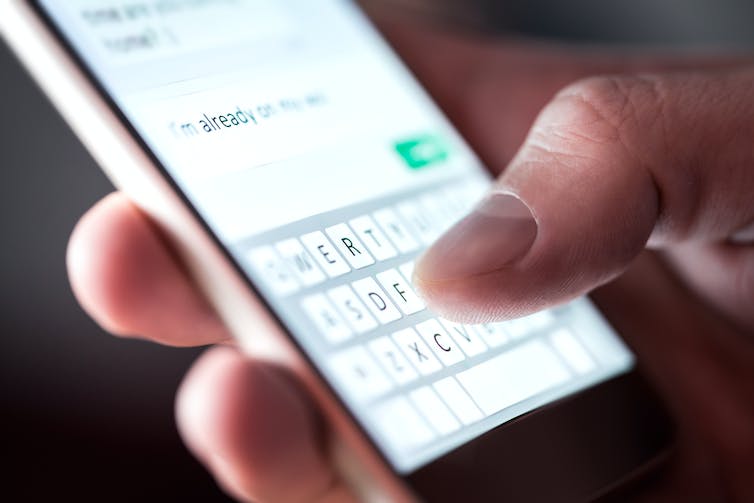 A court might look for clues wherever possible – even in the deceased draft messages folder. Shutterstock

The case of the tractor fender will
Courts have had to consider whether an eggshell , a tractor fender, a petticoat hem , graffiti on a wall , and a poem might be valid wills.

In 1948, Cecil George Harris died following an accident on his Saskatchewan wheat farm. He had been trapped underneath his tractor for 12 hours in torrential rain. His wife and neighbours eventually found him during a lightning storm. Despite their best efforts, he died of his injuries.

Two of his curious neighbours went to examine Harris’ stricken tractor and found that message he’d scratched into the paint on the fender:

In case I die in this mess I leave all to the wife. Cecil Geo. Harris

An extract from ‘In Case I Die In This Mess’, an episode of the podcast History Lab, from Impact Studios at the University of Technology, Sydney.

The neighbours removed the fender after his funeral and conveyed it to a local lawyer. It was eventually held to be Harris’ last will and testament. Because this case is now a quirky landmark of Saskatchewan succession law, the fender and the knife Harris used to carve his message are now on display in the library of the University of Saskatchewan law school.

What would the deceased have wanted?
Grief, generosity, love, regret, hate, spite, retribution, eccentricity: the full gamut of human emotions are revealed in a person’s will, and in the conduct of their beneficiaries and descendants after death.

Probate courts are required to walk into this emotional minefield, and ask: what would the deceased have wanted?

When a deceased person hasn’t left a will, or they’ve left one that’s deficient, the court looks for clues.

And, as history tells us, the courts have often acted with considerable sensitivity and flexibility in trying to do justice to the dead.

If this article has raised issues for you, or if you’re concerned about someone you know, call Lifeline on 13 11 14.

In Case I Die In This Mess was made by Impact Studios at the University of Technology, Sydney – a new audio production house combining academic research and audio storytelling. It is the first episode in a four part series titled ‘The Law’s Way of Knowing’, available for download through the award-winning UTS History Lab podcast.

Related articles:
Are online wills legally binding?
Is it time to review your will?
Are living wills binding?

Online wills are a more affordable option, but are they legally binding?

Estate planning: is your will in need of a review?

Lawyer and author Rod Cunich explains when it's time to check your will.

Maeve is having trouble getting her family to appreciate her wishes should she fall seriously ill.