Nearly all of the income tax focus in the context of ‘working from home’ during COVID-19 has been on claiming “running expenses” – things such as electricity, heating and internet/broadband fees.

These are pretty straightforward.

The Australian Tax Office released a temporary shortcut for claiming running expenses to make it easier: it’s 80 cents for each hour you work from home between March and July.

At the same time, it has made the brief comment that employees generally cannot claim “occupancy expenses” as deductions. Occupancy expenses are things such as interest on housing loans, rent, council rates, building insurance and similar things.

These would be deductible if you were running a business from home, but generally should not be if you are merely working from home for an employer that normally provides you with a place to work.

And there’s something else about them.

The capital gains tax exemption for the gain on sale of the family home (the main residence) is linked to them; in particular to the deductibility of interest expenses.

If a taxpayer is entitled to deductions for interest on the home loan, she can lose a portion of her capital gains tax exemption. 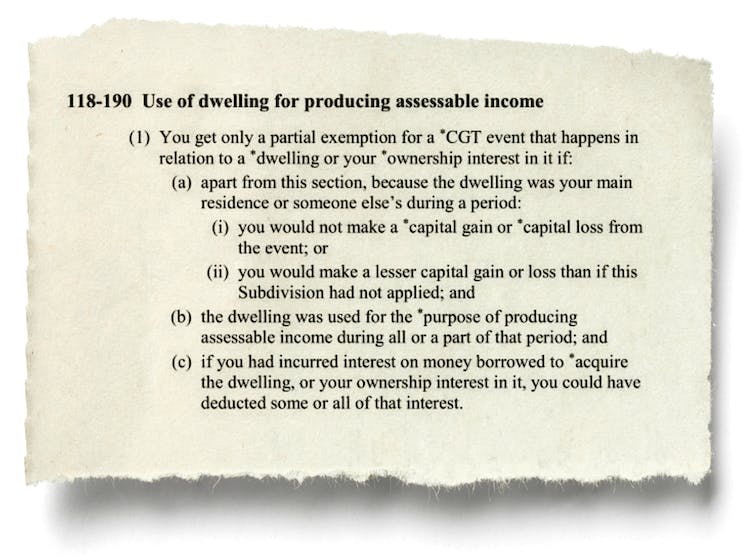 In effect, the tax benefit from deductibility is offset or clawed back through denial of the full capital gains tax exemption later on.

Of course, if there is no immediate prospect of the sale of the home, then to many people the loss of the full capital gains tax exemption won’t be of much concern.

Try not to put capital gains into play
An interesting, perhaps strange, aspect of this part of the rules is a homeowner can lose part of their capital gains tax exemption even when they don’t have interest to deduct (such as when they have paid off their home loan).

The relevant rule poses the question: would you have got interest deductions if you still had a loan on the home? If the answer is yes, the homeowner loses part of the capital gains tax exemption, even though the homeowner did not in fact obtain tax deductions for interest.

There is a perception among some taxpayers, and perhaps some tax practitioners, that taxpayers have choices in this area, that it will help to say: “I will not claim my deductions, and therefore I get to keep my capital gains tax exemption.”

In short, there is no choice given to taxpayers in the relevant substantive tax rules. If the tax office knows you have used your home to earn an income, it has every right to deny you some capital gains tax benefits if and when you sell later on.

Not claiming deductions might not help
Of course, how taxpayers (possibly with help of tax agent) fill in their tax returns is their choice; they can decide to depart from the law, assuming they know how it applies in their situation. In turn, whether ATO audit coverage is sufficient to pick up incorrect tax returns depends on a range of factors.

If the taxpayer was out of time to amend (or make) their deduction claim, they would suffer both ways. The other issue with occupancy expense deductions is that if there is ‘financial union’ in the finances of spouses, the spouse entitled to occupancy expenses may only be entitled to 50 per cent of the relevant expenses because the other 50 per cent is incurred by the other spouse.

Regrettably, legal cases and the tax office itself have not dealt with this issue in a meaningful way.

The courts and the Administrative Appeals Tribunal (AAT) have set the bar very high. Let’s put aside for the moment the situation of the mere contemplative worker who needs little equipment to work, other than perhaps a laptop computer.

There are two requirements; both must be satisfied.

First, the room claimed for occupancy expenses must be used extensively and systematically for taxpayer’s work. Some cases have put this requirement in terms of near exclusive use for work such that the taxpayer and family have forgone domestic use of that room and/or that the room is not readily adaptable back to domestic use. Minimal domestic use (such as storing some clothes in room, thoroughfare to rest of home) will not preclude satisfying the usage requirement.

This usage requirement will be enough to deny deductions to many COVID-19 at-home workers because many are working in bedrooms, lounge rooms, dining rooms and so on.

Those who choose to “run the risk” of satisfying deductibility for occupancy expenses and thereby losing part of the capital gains tax exemption might consider retaining a significant degree of domestic use of the relevant room.

(Renters, not being owners, have no capital gains tax cost down the track, so obtaining deductions for occupancy expenses would be a win with no accompanying loss.)

A worker who has been lawfully directed, due to COVID-19, that they cannot work at the normal employer-provided premises must be taken to satisfy this second criterion; that working at home is a necessity and not for the mere convenience of the taxpayer.

It’s hard to claim a place for contemplation
What about the mere contemplative worker, the one who needs very little equipment or items to carry out their work, perhaps just a laptop computer and a range of hard-copy documents.

There is little to no guidance in the cases on this. However, it’s likely if a worker is a mere contemplative worker, that person cannot deduct occupancy expenses even if there is extensive use of a room.

The reasoning is likely to be that the worker could work in many places (such as a lounge room, public library, café) without compromising their quality of work.

The room in the home they are working in does not have that degree of necessity about it and/or working in that room might have a high degree of mere convenience. It is also likely that aspects of the ‘usage criterion’ will be drawn on to help deny the deduction (such as that the room has not lost its domestic character).

In the end, a court or the Administrative Appeals Tribunal will have to rule on at least one COVID-19 case. It is hoped that the case(s) are roughly representative of workers more generally, so serve as guidance.

As well, some authoritative ruling on the mere contemplative worker would be very welcome, even for a post-COVID-19 world.

Did you work from home this financial year? Are you planning on ramping up the deductions?

Why more women get Alzheimer’s

Study hints at menopause being a major player in cognitive decline.

Why solo cinema outings are the best

It's traditionally a group activity, but here's why you should try watching a new release alone.

Is it safe to visit Centrelink?

Polly wants to know what measures Centrelink has in place for visitors.