As winter begins, porridge makes an excellent choice for breakfast. For many, porridge is redolent with memories of childhood. It is warm, filling, high in fibre and associated with lowering blood cholesterol.

It’s very reliability may also be comforting in unsettling times; as actor Stephen Fry once tweeted: “Nothing in this world is at it seems. Except, possibly, porridge”.

Although most commonly used to describe a breakfast dish made with oats boiled with water or milk, any grain so cooked in liquid can be described as porridge. The dish’s history is deep.

Not so paleo
Porridge has an ancient lineage as a staple food, including in Europe, Africa and the Middle East. In 2015, National Geographic magazine reported on an analysis of a Palaeolithic pestle from 33,000 years ago, revealing it was dusted with oat starch. This suggests ancient humans were grinding oats into flour – at odds with the popular Paleo diet trend that holds humans weren’t eating grains then. The oat remnants on the pestle, found in an Italian cave, may have been cooked into a porridge.

In her book, A History of Food, Maguelonne Toussaint-Samat writes early peoples might also have made something like thick pancakes by cooking various porridgey mixtures on hot stones placed on a fire’s embers.

Oats are traditionally associated with Scotland, although barley and a grain called bere were originally introduced by the Vikings. True to her roots, Scottish-born Australian cookbook writer Margaret Fulton decreed salt was essential for a proper porridge.

Gruel to be kind
Gruel is a thin porridge, which was served in English workhouses in the 19th century. Oliver Twist pleads “Please Sir, I want some more” in Charles Dickens’ second novel. The writer’s description led to gruel being thought of as unappetising.

Yet, gruel also features as a nutritious food in many 19th century cookbooks. In A Plain Cookery Book for the Working Classes (1852), Queen Victoria’s chef Charles Elmé Francatelli recommends restorative gruel made with oats or barley.

The 1893 edition of Mrs Beeton’s Every-day Cookery and Housekeeping Book boils just one tablespoon of oats in a pint of water to make a ‘dainty’ dish for the ill. Mrs Beeton notes this digestible liquid can be flavoured with lemon peel or a little grated nutmeg. She notes some invalids will appreciate the addition of a good measure of sherry or port. 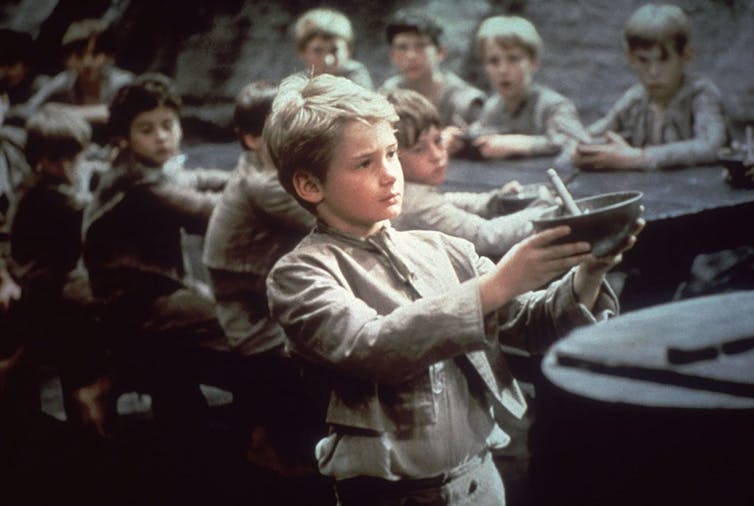 Porridge time
The consumption of porridge in British jails led to the 1950s slang ‘doing porridge’ for serving a custodial sentence. This, in turn, suggested the name of the classic 1970s British comedy starring Ronnie Barker.

Today, around the world, oats are grown for animal feed and human consumption. Although some recent reports have highlighted the possible presence of pesticides and weedkillers in widely marketed oat products, these have been refuted by producers.

In the late 1990s, savoury oaten porridge made gastronomic headlines with Heston Blumenthal’s Snail Porridge from his Michelin-starred Fat Duck restaurant. The dish of oats cooked in a stock flavoured with ham and snails, served with more snails and garlic butter and topped with a fennel salad, became one of his signature dishes. 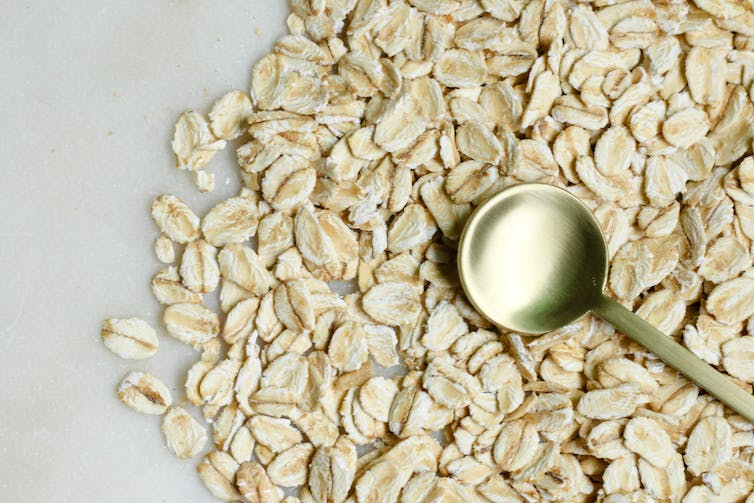 Not all oats are equal. Melissa Di Rocco/Unsplash, CC BY

Choosing, and cooking with, oats
The most commonly available oat varieties are ‘rolled’, ‘quick’ (or ‘quick cooking’) and ‘instant’.

The below recipes below use rolled oats. These are oat kernels that are steamed, then rolled.

Quick cooking oats have been steamed for longer, rolled more thinly and/or chopped into smaller pieces. Another way to reduce the cooking time is to soak rolled oats before boiling them.

Instant oats are more highly processed, so that they can be prepared by just adding boiling water or heating briefly in the microwave.

As rolled oats can be eaten raw (as in natural muesli), they are very forgiving in terms of cookery.

1. Traditional porridge
Mix 1 cup of rolled oats with 3 cups of cold water in a saucepan. Add a pinch of salt.

Bring to the boil, and then turn the heat down. Simmer gently for about 20 minutes, stirring more as it thickens. If too thick, loosen with a splash more boiling water. If too thin, boil a couple more minutes.

Top with golden syrup or brown sugar and serve with cold milk.

– using cow’s milk (or other varieties) instead of, or mixed with, the cooking water
– fruit (apple, bananas, fresh or frozen berries are especially good) and seeds or nuts can be stirred into the cooked porridge or used as a topping
– honey and maple syrup, and plain or flavoured yogurt, are also good toppings.

2. Microwave porridge
Follow the proportions above. Depending on the microwave’s wattage, cook (covered) on high for around 4 to 5 minutes, stirring halfway.

Care needs to be taken to use a tall enough bowl so that the porridge does not boil over.

3. Savoury porridge
Oats are cooked as above, using salted water or vegetable or chicken stock, and treated as any other kind of soft grain (like polenta or risotto), with vegetables and other ingredients added before serving. 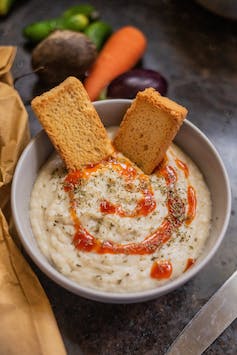 – stir in tasty cheese and top with sautéed mushrooms or capsicums, and a fried or poached egg
– top with sliced avocado, and then drizzle with tahini and lemon juice
– stir in shredded spinach, top with chopped fresh tomatoes and chilli, and drizzle with garlic-infused olive oil
– ground black pepper or hot Sriracha sauce goes well with all of these.

How do you enjoy your porridge? Why not share your favourite recipes with our members?