In the fight against the coronavirus, the Australian government has enacted a series of measures that have expanded executive powers. These include the use of smartphone contact-tracing technology, mandatory isolation arrangements and the closure of borders and businesses.

While Australians seem broadly supportive of this type of government control in times of crisis, critics have expressed concerns about the long-term implications of these measures for individual rights.

There are a few salient questions: how does executive power accelerate during a pandemic – and why is this a cause for concern? And what type of oversight of executive power should there be in a democracy?

But in exceptional times of disaster and crisis, the executive government tends to take a pre-eminent role. Under our biosecurity and public health laws, governments can declare states of emergency and disaster, which give them significant coercive powers.

As crises such as pandemics, disasters or wars threaten the very existence of the nation, the rationale is the government needs these enhanced powers to protect the people.

By contrast, the parliament and courts tend to stand on the sidelines and reduce their scrutiny of these powers.

The government also has the power to detain and isolate people who are suspected of being infected with the virus.

State public health laws have also been used to imposed a range of coercive measures, such as mandatory quarantine, compulsory wearing of face masks, restrictions on people’s movements and gatherings, the closure of businesses and border closures between states. 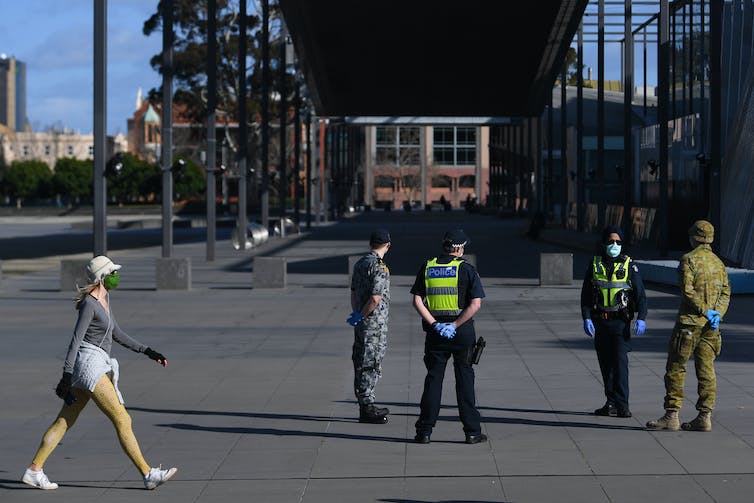 Police in Melbourne on patrol for violators of mask and gathering rules. James Ross/AAP

How has parliament reacted during the crisis?
Alongside the expansion of executive power has been a decline in parliamentary scrutiny. The federal and state parliaments have been recessed for long periods during the pandemic. As a result, they are not scrutinising government action to the extent they should.

Even when parliament convenes during the pandemic, it passes legislation hastily without much scrutiny. For example, the COVIDSafe contact-tracing legislation was rushed through parliament in three days, despite significant privacy concerns.

Another issue is parliament has delegated powers to the government to make major decisions by ministerial decree – both during and outside of a public emergency. This further increases executive power. The Centre for Public Integrity estimates such decisions have doubled in the past 30 years.

State police, aided by the Australian Defence Force, have enforced restrictions on individual movement and assembly. There are concerns the police and military have at times implemented these restrictions in a heavy-handed way.

For example, in New South Wales, a man was fined $1000 for eating a pizza alone in his car on the way home after being laid off from his job.

Police also threatened to fine two women walking in a park with babies for violating the two-person gathering rule. The attorney-general later clarified that babies were not counted under the rule. 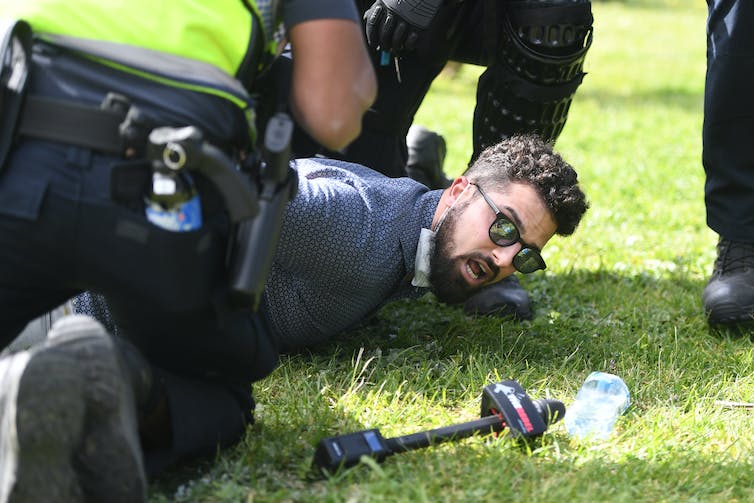 Police have been accused of using excessive force in breaking up some anti-lockdown protests. AAP

Also, research of wartime laws has shown some supposedly ‘temporary’ coercive measures have persisted long beyond a time of crisis and become permanent.

For example, the current Crimes Act has replicated unlawful associations provisions from the First World War.

And Australia’s national security laws have exponentially increased in the years since the terror attacks of September 11 2001. Governments have strategically deployed these sweeping executive powers to punish protesters, journalists and whistleblowers.

Thus, executive powers need to be closely monitored to ensure they are rolled back after a crisis.

What sort of oversight of executive power should there be?
So, how can we enhance government accountability in a pandemic?

In the midst of a pressing national crisis, legislative safeguards are required to protect individual rights and freedoms.

All legislation enacted during the crisis should automatically expire or be periodically reviewed. All delegated legislation should also have an automatic expiry date and be of short duration. This is not universal practice for all laws made during this pandemic.

All coercive powers under emergency health laws, such as the detention of those suspected of having COVID-19, should be subject to both court and tribunal review to allow for adequate legal scrutiny of government actions.

And both parliament and the courts should carefully police the executive’s use of its extensive powers during the pandemic. 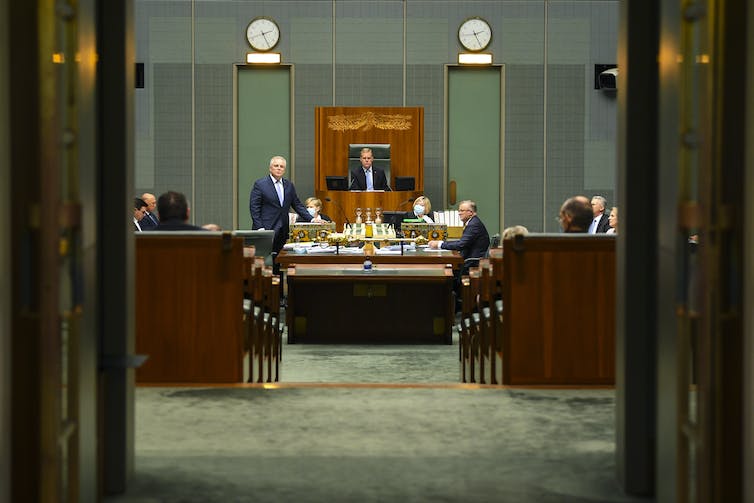 Parliament needs to scrutinise the government’s actions during the pandemic much more closely. Lukas Coch/AAP

More broadly, given the quiescence of parliament and the courts in times of crisis, further independent oversight in the form of a federal anti-corruption watchdog is essential.

In the heat of a crisis, the vast expansion of executive powers – coupled with a sophisticated regulatory state that has the capacity to closely monitor and police its citizens – generates great risks for individual rights and liberties.

We need to be vigilant to ensure these powers are not abused and are rolled back at the end of the crisis.

Do you think the pandemic has made governments too powerful?

COVID to leave Australia with smaller economy and older population

Josh Frydenberg has painted a sombre picture of the outlook for the Australian economy.

The Morrison government plans to remove lending legislation introduced after the GFC.

Expert modelling shows for every dollar women get, men would get $2.19.