Back in July, One Nation leader Pauline Hanson appeared in her then regular spot on Channel Nine’s Today program.

During a discussion about the hard lockdown of Melbourne’s public housing towers Ms Hanson said:

A lot of these people are from non-English speaking backgrounds, probably English as their second language, who haven’t adhered to the rules of social distancing

Ms Hanson added “a lot of them are drug addicts” and “alcoholics” before noting if people were from “war torn countries” they “know what it’s like to be in tough conditions”.

The comments – and the way Channel Nine presented them – caused a storm of controversy. And Ms Hanson lost her regular spot on the program.

But the episode didn’t stop there. Ms Hanson then sent a gift to each of the residents of one of the towers in North Melbourne.

What is even more perplexing, the head of Australia Post reportedly intervened to make sure Ms Hanson’s mail was delivered to their intended recipients.

Hanson’s ‘gift’
For $7 you can buy your very own branded stubby holder from the One Nation website.

Featuring Ms Hanson’s image against a sunset orange background it is emblazoned with the words: “I’ve got the guts to say what you’re thinking”.

These were the stubby holders sent to the tower’s residents, which came with a note saying “no hard feelings”.

It’s difficult to imagine what kind of reasoning was behind this ‘gift’.

To their credit, the people managing deliveries to the tower discovered what was in the parcels, each addressed only “to the householder”. Fearing, quite reasonably, the deliveries would inflame an “emotional tinder box”, the deliveries were withheld.

Australia Post gets involved
If one’s political suspicion was roused by the stubby holder stunt, things became even more unbelievable when Australia Post chief executive Christine Holgate, was implicated in trying to make sure the parcels were delivered.

On hearing the people managing the locked down tower had intercepted the deliveries, Ms Holgate’s legal counsel reportedly sent a threatening email to Melbourne City Council.

The Age and The Sydney Morning Herald, who saw the email, reported it gave Melbourne City Council five hours to deliver the parcels, or said police might be notified.

Australia Post under pressure
Ms Holgate has come under additional scrutiny of late. Australia Post has been breaking delivery records during the pandemic. But has also faced concerns about delays and service cuts.

Ms Holgate is the highest paid public servant in the country, earning more than $2.5 million in pay and bonuses in the 2018–2019 financial year. 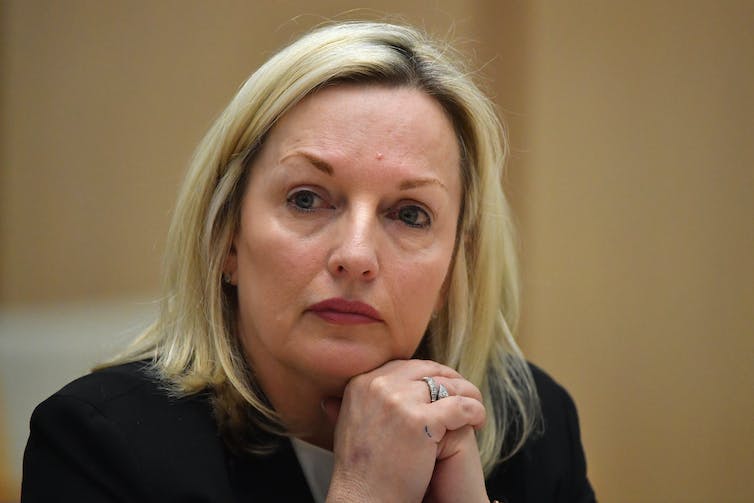 Okay, CEOs earn a lot. But at a time when Australia Post is asking staff to work extra hours and use their own cars to deliver a backlog of parcels, its executives have still been eyeing up huge bonuses.

Corporate politics
It is difficult to understand why Australia Post got involved in the stubby holder saga. Why would it want to stand up for a political stunt aimed at people in a hard lockdown?

Several media outlets have been quick to point out that at the time, One Nation senators were considering whether to support overturning a temporary relaxation of postal delivery rules. 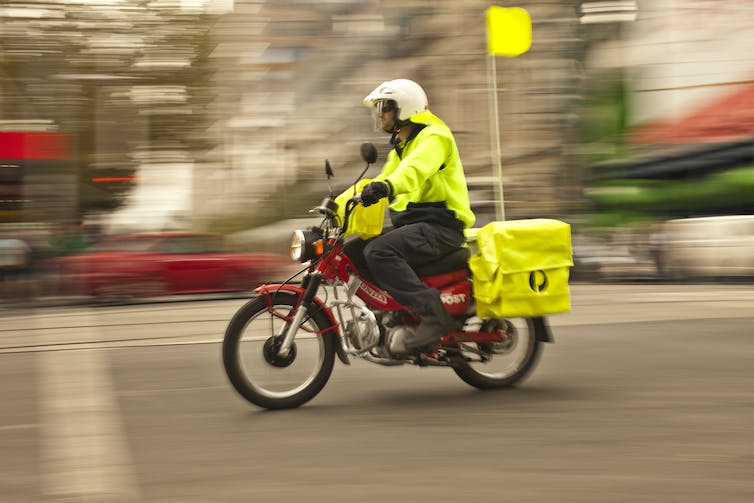 Back in April, Australia Post’s regulatory requirements were adjusted due to COVID-19, allowing them to focus on parcel rather than letter delivery. The changes, backed by Australia Post, are due to end in June 2021.

This was a political hot potato, with the two major parties taking opposite sides and Labor pushing to “disallow” the changes in the Senate, amid union concerns about job losses.

More than a storm in a stubby holder
In a statement, Australia Post said Ms Holgate did not personally intervene in the stubby holder deliveries.

“Australia Post confirms that Ms Holgate did not speak to Senator Hanson or One Nation on this matter, nor did she threaten Melbourne City Council.”

Australia Post’s response has been to justify their actions purely on their legal obligation to prevent interference with the mail. No politics at play here, they claim, they were just doing their job.

As for Ms Hanson, she was unconcerned, describing the whole thing as a “storm in a stubby cooler”.

But nobody said anything about the wellbeing of residents of the towers, who were the target of this terrible exercise in populist publicity.

Those residents, many of them vulnerable, were treated as collateral damage in this episode.

It doesn’t take a lot of guts to say Australia should expect much more from its politicians, its business leaders and major service providers.

Can you take a break from aged care?

What are your rights when pulling a loved one out of residential aged care?

Surprising things that might be affecting your sex drive

Libido levels vary through life: here are some common causes.

Libs want home-ownership to be a part of superannuation

Home-ownership could become the cornerstone of retirement under proposal.