A government report shows that the number of cancer cases diagnosed in 2019 is expected to be three times that of 1982, but survival rates are improving for most, but not all types.

AIHW spokesperson Justin Harvey said that the trend was primarily due to rises in the number of cases of prostate cancer, breast cancer, bowel cancer and melanoma, and was partly explained by ageing and the increasing size of the population.

Over the same period (1986–1990 to 2011–2015), survival rates for patients with cancer of the larynx, lip, mesothelioma, brain and other digestive organs showed no significant change. And survival rates for those suffering from bladder cancer had decreased.

For the first time, national data are available on the stage at which cancer was diagnosed for the five most common cancers in 2011 (prostate, breast, bowel and lung cancer and melanoma). This was due to collaboration between the AIHW, all state and territory population-based cancer registries and Cancer Australia.

While survival rates continue to improve, the report shows that cancer remains a major cause of death in Australia.

“In fact, when we consider all types of cancer together, we see that they are responsible for more deaths than any other group of diseases, accounting for three in every 10 deaths in 2016,” Mr Harvey said.

Lung cancer is expected to be the leading cause of cancer death in 2019, followed by colorectal cancer, prostate cancer, breast cancer and pancreatic cancer.

“More males than females are expected to die from cancer in 2019, with 56 per cent of cancer-related deaths expected to occur in males.” 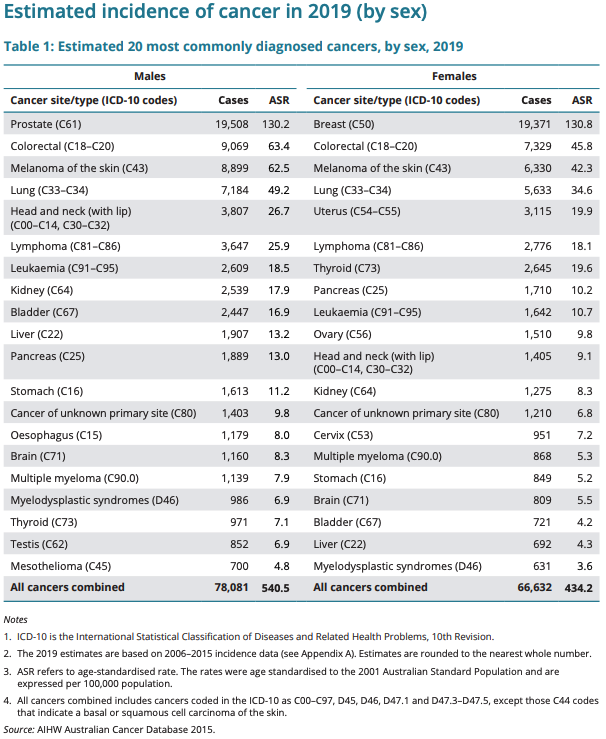 The report also looked at how cancer outcomes differ across population groups.

Mr Harvey said that while death and survival rates varied among different groups, people diagnosed with cancer in Australia generally had more positive outcomes when the data was considered in an international context.

“The data suggest Australia has among the world’s best cancer survival rates, with a relatively low ratio of deaths to the number of cases diagnosed in the Australia/New Zealand region,” he said.

The United States and most areas of Europe also recorded positive results above the global average.

Are you surprised at the prevalence of cancer in Australia? Do you follow developments and research?