It will be tempting for some to overlook the climate change challenge in the rush to restart the economy after the pandemic.

In the United States, the Trump administration is reportedly contemplating a coronavirus rescue package tailored specifically to oil and natural gas producers, while the Chinese government is trying to stimulate its economy by allowing polluters to bypass environmental regulations.

But the pandemic is not a reason to weaken the commitments to net zero emissions. In fact, climate action is a vital protection against further global shocks, especially as governments plan their post-pandemic stimulus packages.

The economic shock from climate change
The devastation the virus has inflicted is a reminder of our vulnerability and the importance of prevention and mitigation.

It’s a point bolstered by fresh evidence about the scale of economic shock we might face if we fail to meet the targets of the Paris Agreement.

A major study published in Nature Communications last month put a dollar value on the cost of climate inaction. If we don’t prevent the planet warming, we can expect a bill of between $US150 trillion and $US792 trillion by 2100. That’s up to $1,231 trillion in Australian dollars.

The predicted ‘global shock’ would be even more financially catastrophic than coronavirus.

The research, however, also points out some good news. The limitation of global warming to 1.5 degrees Celsius would deliver a corresponding boost, with the global economy growing by $US616 trillion compared to inaction.

Big businesses on board
The economic cost of the shutdowns imposed to address the coronavirus pandemic have not been compared to the value of the lives saved.

Climate change action, on the other hand, has repeatedly been found to pass traditional cost-benefit tests. The solutions are known to already be available and effective if deployed in time.

It found spending on new green energy projects generates twice as many jobs for every dollar invested, compared with equivalent allocations to fossil fuel projects.

Climate action, then, is vital for the economy. That’s why a remarkable list of business leaders have just added their names to a call for stimulus funds to be invested in what they call “the economy of the future”.

This includes chief executives, chairs and senior executives from major organisations including Rio Tinto, BP, Shell, Allianz and HSBC, together with the Energy Transitions Commission (a global group of companies and experts working towards low-carbon energy systems).

In Europe, a coalition of chief executives, politicians and academics is calling for major investment in projects to make the European Union the “world’s first climate-neutral continent” by 2050.

They say the need for state intervention in the wake of the pandemic provides an unparalleled chance to build economies that are sustainable, resilient and dynamic.

Technology is getting better
Boosting the economy with climate action is a message our recent research from ClimateWorks Australia reinforces. It shows how we can achieve the Paris targets with technologies already available.

But we can only do it if government, business and consumer decisions support the accelerated deployment of these technologies, and only if we roll out mature zero-emissions technology solutions more quickly across all sectors (not just electricity), and invest in development and commercialisation of emerging solutions in harder-to-abate sectors.

Across all sectors of the Australian economy, technology provides opportunities to decarbonise, and has rapidly improved.

For example, advances in lithium ion technology mean high-tech batteries cost only a fifth of what they did 10 years ago. So it’s easier and cheaper to store electricity than ever before – even as renewables now offer a consistently cheaper source of generation than fossil fuels. 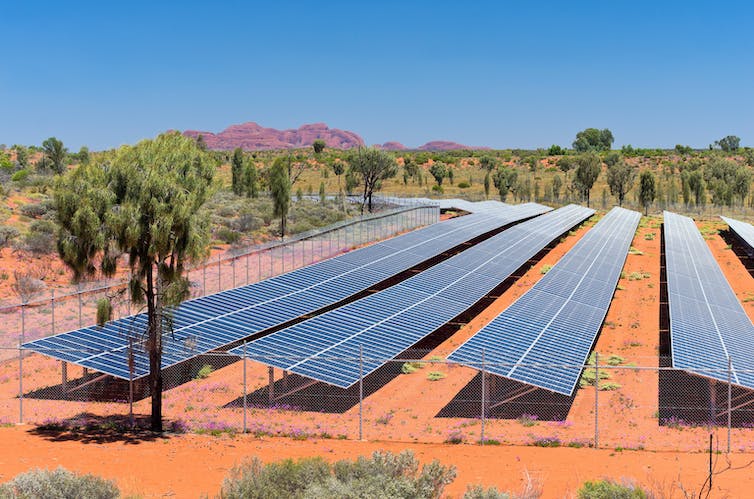 Lithium ion batteries have come a long way in a short time. Shutterstock

Innovations like that have changed the game. A new Australian Energy Market Operator study makes clear that, within five years, Australia can run a power grid in which 75 per cent of electricity comes from wind and solar.

A clean stimulus package
Measures these pathways involve are ideally suited to a stimulus package. Governments could create jobs and spur industry, while modernising the economy for the challenges ahead.

How? By building charging infrastructure to support electric vehicles powered by renewables; encouraging investment in sustainable agriculture, fertiliser management and carbon forestry; deploying PV and battery systems across city buildings; or embracing any number of other ‘shovel ready’ solutions.

Through this pandemic we’ve witnessed how people have learned new approaches and switched mindsets almost as quickly as the COVID-19 pandemic lockdowns and social distancing restrictions began.

Just as we’re remembering to wash our hands more than we used to, coming out of the pandemic, it will pay to be more attentive about remembering to choose the zero-emissions option at every step.

We stand at a crossroads. If government stimulus packages around the world favour carbon-intensive practices and miss the moment to modernise and decarbonise, we will lock ourselves into a warming future.

If, however, we rise to the challenge, we can use the recovery from one crisis to simultaneously address another.

Related articles:
Where climate change will hurt the most
Solar savings explained
Climate change in Australia

There's a cost to installing a solar system, but it should eventually save you money.