The Australian Bureau of Statistics this week released a provisional tally of the changes in Australia’s overall death rate amid the coronavirus epidemic.

Australia has had 103 known COVID-19-related deaths, with 21 reported before the end of March. The ABS death counts for respiratory diseases do not include these known cases, but might include COVID-19 deaths that were not recognised or confirmed as such at the time.

Overall, there were more than 800 ‘excess deaths’ in the first quarter of 2020, compared with the average of the previous five years. The 103 confirmed COVID-19 deaths represent just a small fraction of these deaths. But my analysis shows that even in the early days of the pandemic, there are some signs that the impact of COVID-19 on Australia’s death rate may be bigger than the official tally suggests.

Death data allow us to monitor death rates by age, gender, location and cause, and to assess how death rates are changing over time. ‘Excess deaths’ – those that exceed the long-term average – are particularly important to understand, not least during a pandemic but also because they could be due to preventable causes.

The coronavirus death toll has become a feature of media coverage during the COVID-19 outbreak. Unlike in many other countries, the epidemic has stayed within the capacity of Australia’s health system, so we might reasonably expect all COVID-19-related deaths to have been counted accurately.

However, analysis of sewage and swab samples in Europe suggest SARS-CoV-2 (the coronavirus that causes COVID-19) may have been responsible for infections as early as December, before the world became aware of the emerging crisis in Wuhan.

Given the uncertainty about when the coronavirus actually entered Australia, it is possible Australia had COVID-19 cases before official counts began. If so, they may have been recorded as a death from another cause in the death register, most likely as pneumonia.

A death can only be officially attributed to COVID-19 if that patient had been tested for the coronavirus. Australia had a limited supply of test kits initially, and the rules for testing were strict in the early days, mainly focused on returned travellers and their immediate contacts. Testing rules did include hospitalised patients with community-acquired pneumonia, but this recommendation may not always have been followed.

What do the new data show?
The newly released ABS data are raw counts that only include deaths that occurred in January–March and were registered by the end of April. On average, 98 per cent of deaths are reported to the ABS by the end of the following month.

The data compare the weekly death rates against the five-year average death counts for those same weeks from 2015 to 2019. There has been some population growth over this time, which in itself might lead to a rise in expected deaths, but is not yet factored in here. These counts only relate to the deaths that a doctor has certified (in home or hospital), but this is likely to include most deaths directly associated with COVID-19 patients, diagnosed or not.

The 33,066 recorded deaths in the first three months of 2020 is well above the five-year average of 32,249. But overall, the 2020 deaths follow a similar pattern to previous years, with the count rising as we enter the cooler months. 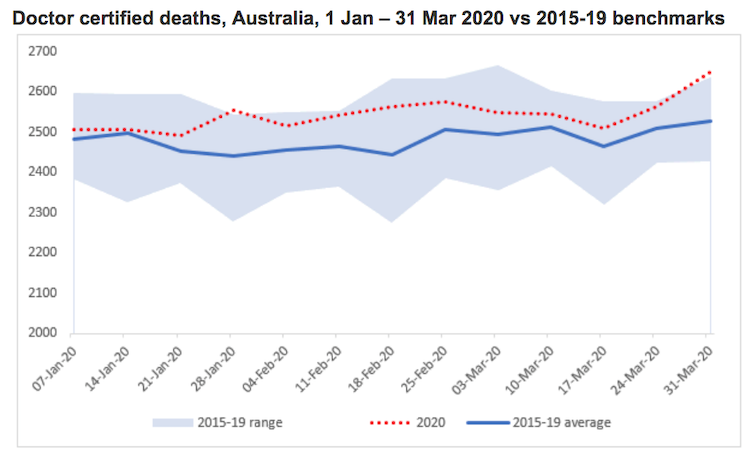 We do expect death counts to increase with population growth and population ageing. These changes will not be particularly pronounced from year to year in Australia, but certainly could account for the small rise in overall deaths seen in these three months. There are no obvious differences between states, but the smaller population in the Australian Capital Territory and Northern Territory actually show slight declines.

Australia reported its first COVID-19 death on 1 March, and has 103 confirmed COVID-19 deaths so far – a small proportion of the total number of deaths. Can we learn more by breaking down the new data?

Delve deeper into the data
One possible way to spot significant changes is to focus on groups known to be at most risk of dying from COVID-19.

First, let’s consider age at death. Older people are most vulnerable to COVID-19, but also have the highest death rates in normal circumstances too.

Bars on the left show the 2020 counts by age, and the five-year average to the right of that. Author provided

Differences from week to week are subtle, but we do see a slight trend by the end of January for the 2020 count to exceed the average. This could simply represent other factors contributing to the slight increase in all deaths, but will be worth watching over subsequent weeks.

Focusing just on those 65 and older in the ABS data, we see once again that 2020 counts are generally higher than average for all weeks for both males and females. Male deaths spiked in the final week of March, which is interesting as males represent 65 per cent of confirmed COVID-19 deaths in Australia.

These are preliminary numbers, but there is no clear evidence of COVID-19 deaths in Australia before 1 March, or before the first known incursion of SARS-CoV-2 into Australia. However, this might be obscured by the ‘noise’ of looking at deaths from all causes at the same time.

It is, therefore, worth taking a closer look at deaths attributed to respiratory causes (the ABS states that these counts do not include the confirmed 103 COVID-19 deaths). The ABS data split the total respiratory deaths into two categories: chronic conditions such as asthma, and acute infections like influenza and pneumonia. It’s in this latter category (shown in the lowermost set of lines on the graph below) where any excess, uncounted deaths due to COVID-19 should be evident.

So far this year there have been 43 excess deaths due to influenza and pneumonia, relative to the average, and the ABS notes that most of these are pneumonia deaths. The excess deaths were mainly in the final two weeks of March, with the preceding weekly fluctuations largely cancelling each other out. This compares with 21 COVID-19 deaths reported by 21 March, and 48 total by the end of the first week of April (ABS data are recorded by date of death; COVID-19 counts by the day publicly reported).

Some of these extra deaths may indeed be due to factors such as population growth, but it does open up the possibility of unaccounted COVID-19 deaths in the early days of the epidemic in Australia that might match, or exceed, those confirmed cases we know about.

The issue of undetected COVID-19 deaths is not the only important question. Has the deferral of elective surgeries affected the death rate? Has there been a death toll associated with people being discouraged from visiting clinics or hospitals for other illnesses? Have the stresses of lockdown and financial uncertainty led to a rise in domestic violence or suicide?

We don’t know the answers yet. But hopefully the forthcoming ABS data will reveal the answers as 2020 continues to unfold.

What do you think of this recent data? Do you suspect you may have had coronavirus without realising it? Or have you been discouraged from visiting clinics for non-COVID-related problems?

What strategies will be needed to help the nation foot our COVID-19 bill?

Long-term strategies and quick fixes are required, but who'll fund them?

COVID-19 may actually trigger the onset of diabetes in healthy people.

More needs to be done to support retirees through the pandemic: advocacy group

Throwing Australian retirees a lifeline could save more than retirement dreams.