The Australian government’s contact-tracing app, COVIDSafe, has been touted as crucial for restarting the country’s economy and curbing COVID-19’s spread.

But until more data are collected, it’s hard to estimate how effective the app will be. Nonetheless, there are some predictable situations in which COVIDSafe’s design may mean it will struggle to fulfil its purpose.

False positives
COVIDSafe uses bluetooth to digitally ‘trace’ people with whom a user has come into contact, with the aim of alerting anyone who has interacted with a confirmed COVID-19 case. But this technology carries a risk of ‘false positives’, wherein a user may be falsely alerted despite not actually having come into contact with the virus.

This is because bluetooth radio waves pass through walls and glass. They can only measure how physically close two people are; they can’t tell whether those people are in the same room, in different rooms, or even in different cars passing each other.

In a high-density apartment building, depending on the strength of bluetooth signals, it’s possible COVIDSafe could falsely alert plenty of people.

The Department of Health has acknowledged this complication, saying: “If this happens and one of the contacts is identified as having coronavirus, state and territory health officials will talk to the people to work out if this was a legitimate contact or not.”

Nonetheless, this process may cause unnecessary distress, and could also have negative flow-on effects on the economy by keeping people home unnecessarily. False positives could also erode public trust in the app’s effectiveness.

False negatives
On the other side of the coin, COVIDSafe also has the potential for ‘false negatives’ Simply, it will not identify non-human-to-human transmission of the virus.

We know COVID-19 can survive on different surfaces for various periods of time. COVIDSafe would not be able to alert people exposed to the virus via a solid surface, such as a shopping trolley or elevator button, if the person who contaminated that surface had already left the scene.

COVIDSafe is also not helpful in the case of users who become infected with COVID-19 but remain asymptomatic. Such a person may never get tested and upload their contact data to the app’s central data store, but may still be able to pass the virus to those around them. More data is needed on asymptomatic transmission.

And regarding the decision to classify ‘close contacts’ as people who have been within a 1.5m distance for 15 minutes – this may have been based on research from Japan for when people are in an open space, and the air is moving.

However, this research also showed micro-droplets remained suspended in the air for 20 minutes in enclosed spaces. Thus, the 1.5m for 15 minutes rule may be questionable for indoor settings.

Downloads vs usage
Recently, Iceland’s contact tracing app achieved the highest penetration of any such app in the world, with almost 40 per cent of the population opting in. But Icelandic Police Service detective inspector Gestur Pálmason – who has overseen contact tracing efforts – said while it was useful in a few cases, the app “wasn’t a game-changer”.

Australia’s Prime Minister Scott Morrison has said on multiple occasions COVIDSafe requires a 40 per cent uptake to be effective.

Since then, federal health minister Greg Hunt has said there’s “no magic figure, but every set of people that download will make it easier and help”. This was echoed more recently by Department of Health acting secretary Caroline Edwards, who told a Senate committee there was no specific uptake goal within her team.

Past modelling revealed infection could be controlled if more than 70 per cent of the population were taking the necessary precautions. It’s unclear what science (if any) was forming the basis of Australia’s initial 40 per cent uptake goal for COVIDSafe.

This goal is also lower than proposed figures from other experts around the world, who have suggested goals varying from 50-70 per cent, and 80 per cent for UK smartphone owners. But the fact is, these figures are estimates and are difficult to test for accuracy. 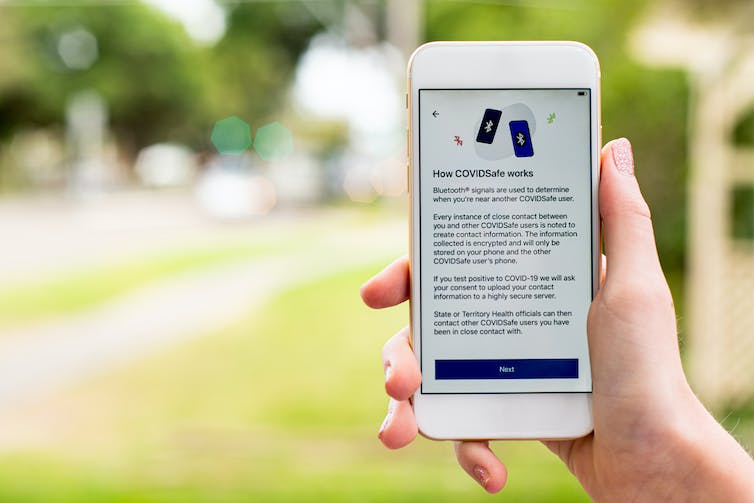 A survey conducted by University of Sydney researchers suggested in Sydney and Melbourne, COVIDSafe’s uptake could already be at 40 per cent – but lower in other places. Shutterstock

Demographic bias
There are many other uncertainties about COVIDSafe’s effectiveness.

We lack data on whether the app is actually being downloaded by those most at risk. This may include:

We also know COVIDSafe doesn’t work properly on iPhones and some older model mobile phones. And older devices are more likely to be owned by those who are elderly, or less financially privileged.

What’s more, COVIDSafe can’t fulfil its contact tracing potential until it’s downloaded by a critical mass of people who have already contracted the virus. At this stage, the more people infected with COVID-19 that download the app, the better.

A tough nut to crack
Implementing a contact tracing app is a difficult task for our leaders and medical experts. This is because much remains unknown about the COVID-19 virus, and how people will continue to respond to rules as restrictions lift around the country.

Predictions of the disease’s spread have also shown a lot of variation.

Thus, there are many unknowns making it impossible to predict the outcome. The important thing is for people to not start taking risks just because they’ve downloaded COVIDSafe.

And while the government pushes for more downloads and reopening the economy, ongoing reviews will be crucial to improving the app’s functionality.

Related articles:
Crucial tech support for vulnerable
How the coronavirus spreads
COVID-19 is hurting the internet

COVID-19 technological support for those most vulnerable

Study provides key insights into how the coronavirus spreads

How COVID-19 is stretching online infrastructure