As fires ravaged large sections of the Australian bush last summer, cities and towns all along the coast were blanketed in toxic smoke. Air pollutants were measured at unheard of levels across the country.

Hazardous air descended on cities hundreds of kilometres away from the fires themselves. This air was the most dangerous to breathe on the planet.

The bushfire royal commission was tabled on October 30, with some sobering findings about fires and air pollution. Unfortunately, it showed that as a nation we were not prepared to deal with this public health emergency.

These disasters are inevitable under climate change and, while we need to urgently act on climate change to protect future generations, we also need to make changes now to mitigate the risks that already face us.

Australia must get better at communicating how to identify and then stay safe in hazardous air. A national set of air quality categories would go a long way to achieving this.

Over 400 deaths attributed to bushfire smoke
The royal commission heard that air pollution from the summer fires likely caused more than 400 deaths. Thousands of additional hospital admissions put added strain on our hospitals. All up the added burden to our health system was estimated at almost $2 billion.

Even in the absence of extreme natural disasters, air pollution is one of Australia’s biggest public health concerns. Pollution from all sources causes thousands of deaths per year. This includes emissions from coal-fired power stations, diesel cars and wood-fired heaters.

Better preparing ourselves to deal with bushfire smoke will have flow-on benefits in tackling these problems.

Different state, different health advice
The royal commission found “there is an urgent need for national consistency in the categorisation of air quality”. At the moment, every state has their own system to categorise air quality and communicate it to the public.

But there are major discrepancies with how different states identify the worst air quality.

Air quality is the sum impact of the concentration of various unhealthy chemicals in the air. These include ozone, nitrogen and sulphur oxides, and fine particulate matter. To communicate this to the public, most countries convert these chemical concentrations into an Air Quality Index (AQI).

In the US, there is a standardised AQI categorisation for the whole country.

In Australia, the situation is very different. Every state has its own bands, with their own colour codes. These bands trigger at different pollutant levels and carry different health advice. The royal commission told us this needs to be standardised, and now.

For example, in NSW the worst air quality category is ‘Hazardous’, which triggers at an AQI of 200. South Australia, however, only recognises ‘Very Poor’ as the worst class of air quality, with an AQI of 150 and above.

During the summer bushfires, AQI values as high as 5000 were measured. It’s clear the highest bands of air pollution are no longer appropriate.

We need a national air quality system
We have faced a similar problem before. After Victoria’s Black Saturday fires in 2009, we recognised that our fire danger ratings were inadequate.

The Black Saturday royal commission found we needed a higher category for the most dangerous fire conditions. The ‘Catastrophic’ category (‘CODE RED’ in Victoria) was added. It carried clear advice about what to do in such dangerous conditions, instructing people to safely leave as early as possible. 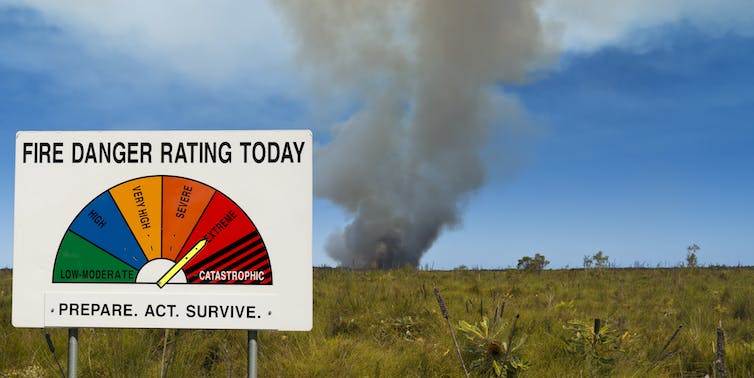 The ‘CODE RED’ or ‘Catastrophic’ fire danger rating was added after the Black Saturday fires. Shutterstock

Something similar now needs to happen with air quality ratings.

When facing future extreme bushfires, we need a way to identify when catastrophic conditions have led to air so unhealthy that everyone should take precautions, such as staying indoors and wearing masks. We then need to get clear health advice out to the public.

A national air quality rating system could achieve this, and would also help address other important recommendations of the royal commission: That we need improved means of getting reliable information out to the public, along with better community education around what to do when air quality plummets.

There’s work to do
An Australian AQI should be featured on national weather reports and forecasts, providing important health information to the public every day of the year. At the same time it would familiarise Australians with air quality measures and actions that need to be taken to protect ourselves from unhealthy air.

But there is work to do. First, we need to develop a new set of air quality categories that work for the entire country, and reflects both the everyday hazards of industrial pollution and the extreme dangers of bushfires. These categories also need to be matched with sound health advice.

And if we are going to report these measures more widely, then we also need to get better at measuring and predicting air quality across the nation – two other important royal commission recommendations.

Achieving all of this won’t be easy. But if we can get it right, then we will be much better placed to deal with smoke risk the next time severe bushfires inevitably happen.

Are you worried about having to adapt to smoke-filled air in future?

Report tells why ageing populations are an asset

Transplants and long-term use of artificial heart pumps may become a thing of the past.