Australians in some parts of the country are dying of heart disease at twice the rate in other areas.

That’s the alarming finding of the Heart Foundation, which released its Australian Heart Maps this morning.

The figures show that the nation’s leading killer is much more dangerous if you live in regional, rural and disadvantaged areas.

“The results show there’s a great divide in heart health across some communities, and people in regional, rural and remote areas are faring worse than big city dwellers,” he said.

The Australian Heart Foundation says coronary heart disease is the leading cause of death in Australia, with heart disease representing one in five of all deaths. Cardiovascular disease accounts for one in four of all deaths in Australia. An estimated 1.2 million (5.6 per cent) Australian adults aged 18 years and over had one or more conditions related to heart or vascular disease, including stroke, in 2017–18.

“Two in three Australian adults are overweight or obese, which are among the leading risk factors for heart disease.”

The Heart Maps data confirms that obesity, lack of exercise and high blood pressure are worse in regional Australia. 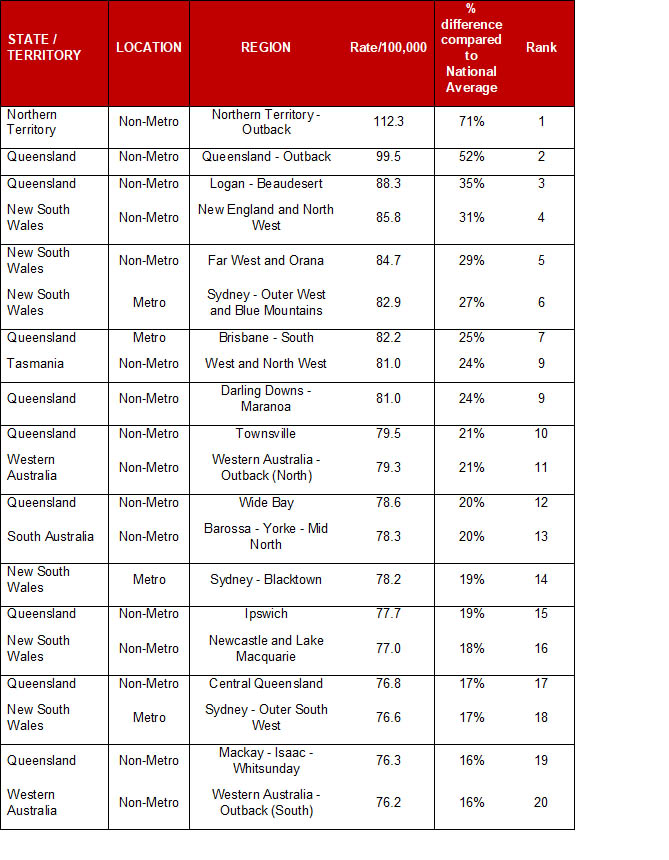 Risk factor hotspots are almost exclusively in the regions where obesity, smoking, high blood pressure and low levels of physical activity are a significant problem.

The Northern Territory has the highest rate of 90 heart disease deaths out of every 100,000 people, compared to 54 in the ACT.

All top 10 obesity hotspots are in regional or rural locations, with unhealthy weight rates in parts of regional NSW twice as high as metropolitan Sydney, Melbourne, and Perth.

Queensland and NSW contain 10 of the least active places, mainly in regional areas but led by Sydney’s southwest. The most active Australians are almost all in capital cities.

In the outback of the Northern Territory, heart disease death rates are two-and-a-half times higher than in affluent northern Sydney.

Prof. Kelly says the Heart Foundation is committed to tackling such glaring disparities in rates of heart disease and risk factors.

“These maps illustrate which parts of the country are in the greatest need of heart health services and investment, and we urge governments at all levels to step up measures to turn these statistics around. All Australians should be able to live a full and healthy life, no matter where they live.

“We also implore everyone to take action to protect their heart health – if you’re 45 and over, or from age 30 if you’re Aboriginal or Torres Strait Islander, talk to your GP about having a Heart Health Check.”

In 2017, when similar figures were released, the National Rural Health Alliance (NRHA) said the higher rates of heart disease in rural and remote communities were due to a dearth of health professionals, reduced health infrastructure and higher costs of healthcare delivery.

“Compared to metropolitan areas, people living in rural and remote locations tend to have lower incomes, and lower levels of education and employment.

The NRHA called for “the urgent development of a bipartisan, cross-jurisdictional new National Rural Health Strategy”.

In 2017, research from the Mary MacKillop Institute for Health Research (MMIHR) concluded that people living in regional, rural or remote Australia were 90 per cent more likely to die from heart conditions caused by high blood pressure than people living in metropolitan areas.

Dr Yih-Kai Chan, lead author and research fellow at the institute, said Australia’s ageing population coupled with an increasingly sedentary lifestyle meant chronic heart disease would continue to be one of the leading causes of death, disability and very poor quality of life among adult Australians “in the foreseeable future”.

Are you aware of how to keep your heart healthy? Are we doing enough to bridge the great health divide in Australia?