We know the virus that causes COVID-19 is linked to very similar viruses in bats, possibly passed to humans via an intermediate species such as pangolins. The chance of a similar pandemic breaking out in Australia might seem far-fetched. But in fact, we tick all the boxes.

Hotspots for emerging infectious diseases exist where human activities collide with a richness of animal species – and hence, high rates of microbial biodiversity.

As research has shown, Australia is such a place. Across the continent, particularly the east coast, natural landscapes have been severely damaged by human activity such as land clearing and mismanagement of river systems. This has led to forest loss, drying wetlands, biodiversity decline and bushfires.

All animals harbour viruses and other pathogens. And when environmental pressures force animals into contact with humans, the results can be catastrophic.

In Africa, the Ebola virus resulted from human contact with fruit bats, and AIDS was caused by a pathogen that jumped from non-human primates during road-building.

In the United States, Lyme disease is caught from deer ticks. And the brain-damaging Nipah virus originated in Malaysia after bats infected pigs, which passed the disease to farmers.

In China and elsewhere, the deforestation of pangolin habitat makes them easy targets for hunters and poachers, who covet the animals for their meat and scales.

Australia is not immune
In Australia, a 2013 review found at least 20 human diseases associated with disturbed natural environments between 1973 and 2010. They include:

Hendra virus: This virulent disease first broke out at a racing stable in Hendra, Brisbane, in 1994. It causes catastrophic neurological and respiratory symptoms in horses, and more than 100 died. Seven people have been infected, four of whom died.

The virus is endemic to Australian flying foxes. It spilled over to people via horses who ate pasture containing flying-fox urine. Habitat loss forced flying foxes to move close to humans to find food. 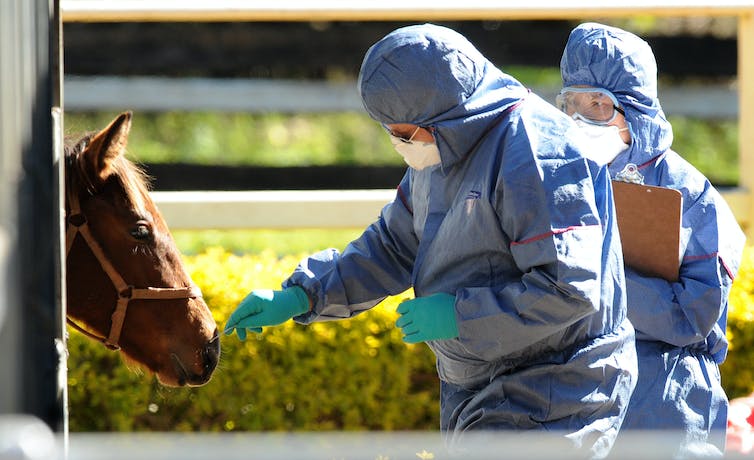 Biosecurity officers taking a swab from a horse during the 2008 Hendra virus outbreak. Dave Hunt/AAP

West Nile virus: This causes brain inflammation and death in humans, horses and birds. An endemic strain in Australia is transmitted by mosquitoes from wild birds. In 2011, an outbreak affected about 900 horses in southeastern Australia of which about 10 per cent died.

The virus emerged in Australia unexpectedly, probably due to changed environmental conditions such as climate change and habitat clearing.

Australian bat lyssavirus: This rabies-like virus can be transmitted from bats to humans, causing serious illness leading to paralysis, delirium, convulsions and death.

A vaccine administered after exposure can prevent the virus from taking hold. But since 1996, three people who did not receive the vaccine after being bitten or scratched by bats died of the virus. 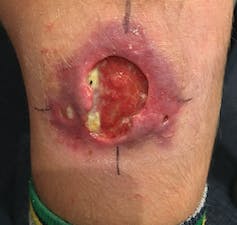 A severe case of Buruli ulcer, which is on the rise in regional Victoria. Medical Journal of Australia

Buruli ulcer: This disease, also known as Bairnsdale ulcer and Daintree ulcer, is caused by a bacterium that destroys skin cells, small blood vessels and the fat under the skin. It causes long-term deformities. The bacterium, Mycobacterium ulcerans, occurs naturally in mosquitoes, vegetation and some possum droppings.

Australia is the only developed country with significant local transmission of Buruli ulcer and the only country to report the disease in wild animals such as possums. The number of people infected in Australia recently increased significantly in Victoria, to 340 new cases in 2018.

Australia: a disease-risk hotspot
A map published in Nature Communications in 2017 showed Australia’s east coast to be a global hotspot for risk of emerging infectious diseases.

Australia continues to lose forest cover at alarming rates and biodiversity is suffering unprecedented decline and disruption. This increases the probability of animal-human interaction.

Drying wetlands such as in the Murray Darling Basin destroy mosquito competitors such as aquatic animals that eat mosquito larvae. This allows mosquitoes to emerge in large numbers when water returns. This may trigger the emergence of infections such as the debilitating chikungunya virus.

Environmental damage can also make humans more susceptible to the effects of infectious diseases. For example, bushfires (driven in part by human-caused climate change) trigger smoke plumes that increase the risk of dying from coronavirus.

Such diseases can also be catastrophic for species other than humans. Chytrid fungus, the most devastating disease on record to affect vertebrates, was first found in Australia in the 1970s. It had emerged in the early 20th century on the Korean Peninsula , alongside a commercial trade network in amphibians. It continues to cause the extinction of amphibian species worldwide. 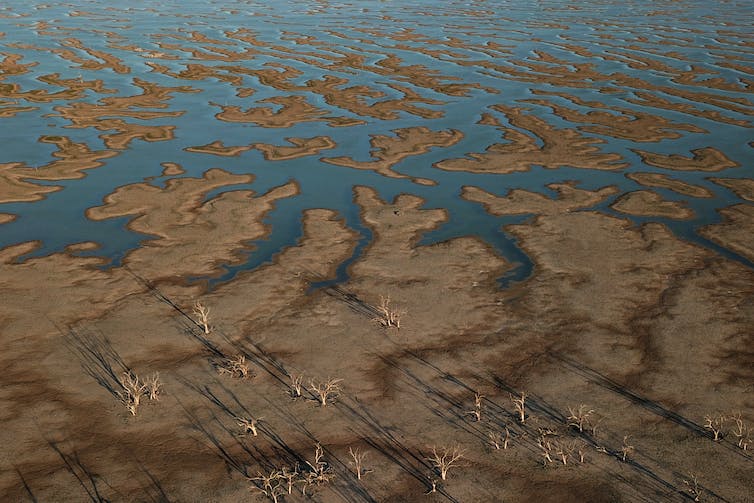 What goes around comes around
It’s clear human health depends on healthy ecosystems. But this undeniable fact is too often overlooked in policy decisions that allow environmental destruction.

Australia is an environmental and disease-risk hotspot. As a recent open letter from prominent health leaders warned, the failure to conserve our environment dismantles our life-support systems and accelerates catastrophic climate change.

For humans to survive in our rapidly changing world, we must urgently strengthen and link policies of human health, environment and climate reform.

There’s a case for moderate drinking, but the keyword is moderate

Only the lightest drinkers get any benefit from alcohol, research finds.

Research shows breakfast may play a bigger role in our health than previously thought.