Health Check: why do I have a cough and what can I do about it?

No wonder you feel so bad. Coughing can be physically exhausting. But it’s your body’s way of getting rid of irritants or extra mucus.

Dry, moist, productive, hacking, chesty, whooping, barking, throaty. These are just some of the terms people use to describe coughs.

While we’re deep into cold and flu season, it’s one of the most common reasons people see their family doctor.

But what is a cough anyway? And what’s the best way to get rid of it?

Read more: Health Check: I feel a bit sick, should I stay home or go to work?

What is a cough?

People can cough on purpose or spontaneously in a protective reflex action. The aim is to both protect the airways from material that shouldn’t be there (such as dust) or to clear the secretions that come with respiratory diseases, such as the mucus and phlegm that come with colds and flu.

Nerve receptors throughout the lungs, and to a lesser extent in the sinuses, diaphragm and oesophagus (food pipe), detect the irritant or mucus. Then, they send messages via the vagus nerve to the brain. The brain, in turn, sends messages back through the motor nerves supplying the diaphragm, chest muscles and vocal cords.

This results in a sudden, forceful expulsion of air.

Your cough may be a one off. Alternatively, you can have a run of repeated coughs, especially in whooping cough, which people describe as a bout, attack or episode.

Which type of cough do I have?

There are many different types of cough but no one definition that everyone agrees on. This can be confusing as patients classify their cough in descriptive terms such as hacking or chesty, while doctors classify them on how long they last: acute (under three weeks), subacute (three to eight weeks) and chronic cough (more than eight weeks).

Neither of these approaches tells us about the cause of the cough. 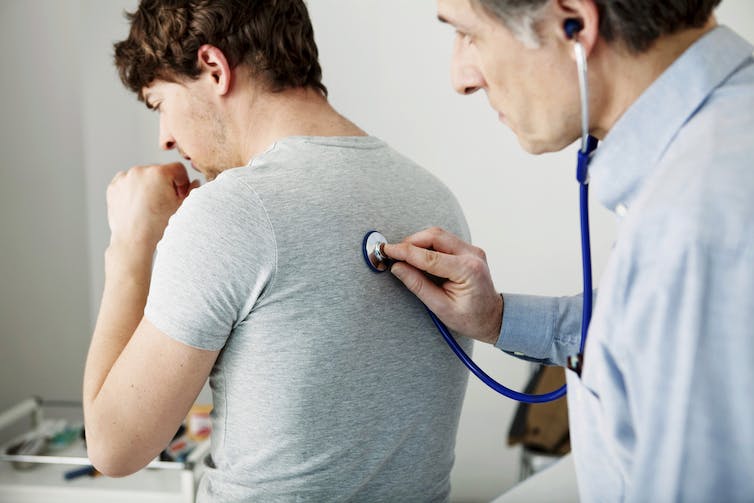 Patients tend to describe coughs using descriptive terms, such as hacking or chesty, while doctors talk about how long the cough has lasted. from www.shutterstock.com

Coughs can also be called wet or dry. Officially, you have a wet cough when you produce more than 10ml of phlegm a day.

For people with chronic coughs, their cough can be further classified after an X-ray – either with lung pathology to indicate something like pneumonia or tuberculosis, or without signs of underlying disease (an X-ray negative cough).

What caused my cough?

Whether you have a wet or dry cough may tell you what has caused it.

A wet cough is more common in people with sinus and chest infections, including influenza, bronchitis and pneumonia, and serious infections such as tuberculosis. A smoker’s cough is usually wet, as the precursor to chronic bronchitis. As it progresses, or when complicated with infection, larger amounts of mucus may be coughed up daily.

Read more: Health Check: what you need to know about mucus and phlegm

Then there is a dry cough associated with a cold or flu that turns into a moist cough. People tend to describe this as ‘chesty’ and it makes them worry that the infection has moved to their lungs.

Yet mostly their lungs are clear of sounds indicating infection when examined with a stethoscope. Even a small amount of mucus stuck around the vocal cords or back of the throat may produce a moist sounding cough. But this is not necessarily a wet or ‘productive’ (producing lots of mucus) cough.

One study showed even doctors struggled to make an accurate diagnosis based only on the sound of the cough. Their diagnosis of the cough was correct only 34 per cent of the time.

For people with chronic unexplained cough, a common hypothesis is that cough receptors become more sensitive to irritation the more they are exposed to the irritant. These cough receptors are so sensitive that even perfumes, temperature changes, talking and laughing may trigger the cough.

Read more: Snout, sniff and sneeze: the language of the nose

People with upper airway cough syndrome may feel mucus secretions moving down the back of the throat, causing them to cough. New evidence suggests the cough is caused by the increased thickness of the mucus and slowness of that mucus being cleared by cilia (hair like structures in lining cells whose job is to move mucus along).

This mechanism keeps the chronic cough going through a feedback loop I call the ‘cough and mucus’ cycle. In other words, the more the throat is irritated by the sticky mucus, the more you cough, but the cough is poor at shifting the mucus. Instead, coughing irritates the throat and tires the cilia, and the mucus becomes stickier and harder to shift, stimulating further coughing.

When coughing gets too much

Coughing is hard work, so no wonder you can feel physically exhausted. In one study, people with asthma coughed as many as 1577 times in one 24-hour period. But for people with a chronic cough, it was up to 3639 times.

The high pressures generated in vigorous coughing can cause symptoms that include chest pains, a hoarse voice, and even rib fractures and hernias. Other complications include vomiting, light-headedness, urinary incontinence, headaches and sleep deprivation. Chronic cough may also lead to people becoming embarrassed and avoiding others.

People still seem surprised and worried when a cough persists after a cold and flu, despite the fact that it outlasts other symptoms in most cases. When an Australian study followed 131 healthy adults with an upper respiratory tract infection, 58 per cent had a cough for at least two weeks and 35 per cent for up to three.

Then there’s the colour of your mucus. Patients and doctors commonly interpret discoloured mucus, particularly if green, as a sign of bacterial infection. But there’s clear evidence that the colour alone does not differentiate between viral and bacterial infections in otherwise healthy adults.

When and how should I treat my cough?

Due to the multiple causes and types of cough, there is no room to cover this question adequately. A safe approach is to diagnose the disease that is causing the cough and treat it appropriately.

For chronic dry coughs and coughs that last after an acute upper respiratory tract infection, where the cough no longer serves a useful function, treatments can be aimed at breaking the cycle of irritation and further coughing. The evidence for effective treatments is patchy, but cough suppressants, steam inhalation and saline nasal irrigations, as well as prescribed anti-inflammatory sprays, may help.

A spoonful of honey reduces cough in children more than placebo and some cough mixtures. It is thought that the soothing effect on the throat is the way this works. 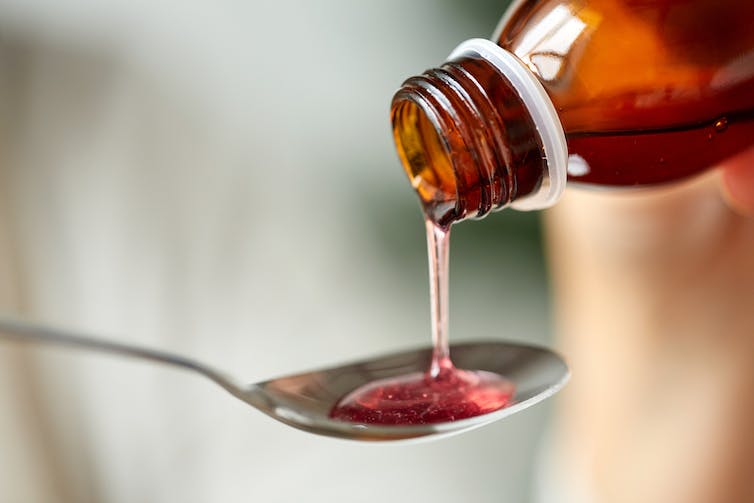 There’s no good evidence that cough medicines work, and they could harm children. from www.shutterstock.com

However, there is no good evidence for the effectiveness of commonly used over-the-counter medicine (cough medicine or syrup) to alleviate acute cough, yet they are still sold. Some contain drugs with the potential to cause harm in children, such as antihistamines and codeine-like products.

Recent expert panel reports do not recommend the use of these cough medicines for adults and children with acute coughs, until they are shown to be effective.

When should I be concerned?

It is fine to try to treat yourself, but if a cough persists or is bothersome, your doctor may be able to suggest or prescribe treatments to reduce your symptoms.

If you cough up blood or are becoming more unwell, consult a doctor, who will investigate further.

Children who cough up phlegm for more than four weeks have been found to benefit from medical investigations and antibiotics.

If you enjoy our content, don’t keep it to yourself. Share our free eNews with your friends and encourage them to sign up. Related articles: Private health insurer in hot water Power to the imperfect Australian men top life expectancy