Environmental scientists see flora, fauna and phenomena the rest of us rarely do. In this new series, we’ve invited them to share their unique photos from the field.

The start of November marks the end of the whale season in the southern hemisphere. As summer approaches, whales that were breeding along the east and west coasts of Australia, Africa and South America will now swim further south to feed around Antarctica.

This annual cycle of whales coming and going has taken place for at least 10,000 years. But rising ocean temperatures from climate change are challenging this process, and my colleagues and I have already seen signs that humpback whales are changing their feeding, migration and breeding patterns to adapt.

As krill stocks decline and ocean circulation is set to change more drastically, climate change remains an unprecedented threat to whales. The challenge now is to forecast what will happen next to better protect them.

Losing krill is the biggest threat
I’m part of an international team of researchers trying to learn what the next 100 years might look like for humpback whales in the southern hemisphere, and how they’ll adapt to changing ocean conditions.

Whales depend on recurring environmental conditions and oceanographic features, such as temperature, circulation, changing seasons and biogeochemical (nutrient) cycles. In particular, these features influence the availability of krill in the Southern Ocean, their biggest food source.

Whales are particularly sensitive to this because they need enormous amounts of food to develop sufficient fat reserves to migrate, give birth and nurse a calf, as they don’t eat during this time.

In fact, models predict declines in krill from climate change could lead to local extinctions of whales by 2100. This includes Pacific populations of blue, fin and southern right whales, as well as fin and humpback whales in the Atlantic and Indian oceans.

Still, when it comes to their migration and breeding cycles, recent studies have shown humpback whales can adapt to changes in ocean temperature and circulation at a remarkable level.

Whales can adapt to warming water, but at what cost?
In a long-term study from the northern hemisphere, scientists found the arrival of humpback whales in some feeding grounds shifted by one day per year over a 27-year period in response to small fluctuations in ocean temperatures.

This led to a one-month shift in arrival time, but a big concern is whether they can continue to time their arrival with their prey in the future when the water gets warmer still.

Likewise, in breeding grounds near Hawaii, the number of mother and calf humpback whale sightings dropped by more than 75 per cent between 2013 and 2018. This coincided with persistent warming in the Alaskan feeding grounds these whales had migrated from.

But humpback whales shifting their distribution and behaviour can cause unexpected human encounters, and cause new challenges that weren’t an issue previously.

Research from earlier this year found humpback whales switched to fish as their main prey when the sea surface temperature in the California current system increased in a heatwave. This has been leading to record numbers of entanglements with gear from coastal fisheries.

And between 2013 and 2016, we documented hundreds of newborn humpback whales in subtropical and temperate shallow bays on the east coast of Australia, 1000 kilometres further south from their traditional breeding areas off the Great Barrier Reef.

However, since these aren’t designated calving areas, the newborns aren’t well protected from getting tangled in shark nets or colliding with jet skis or cruise ships.

Protecting whales
The Whales and Climate Program is the largest project of its kind, combining hundreds of thousands of humpback whale sightings and advanced modelling techniques. Our aim is to advance whale conservation in response to climate change, and learn how it threatens their recovery after decades of over-exploitation by the whaling industry.

Each whale season between June and October, I sail out to the open ocean. This means I have unique opportunities to see and engage with whales, especially during the breeding season. The following photos show some of our breathtaking encounters, and can remind us of our marine ecosystem’s fragile beauty. 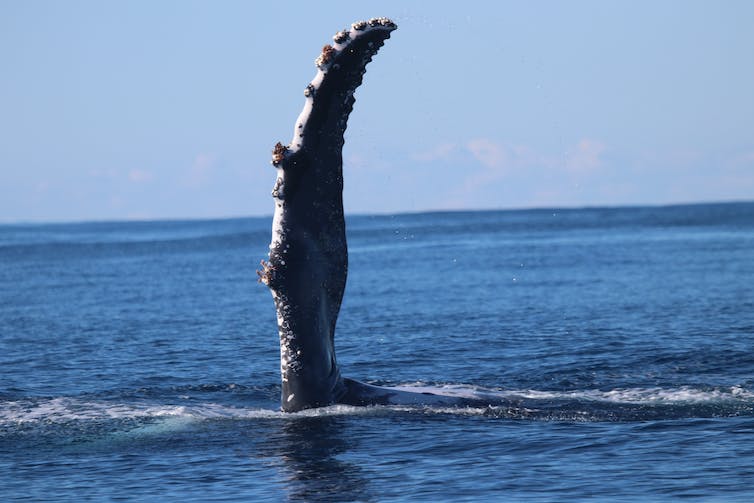 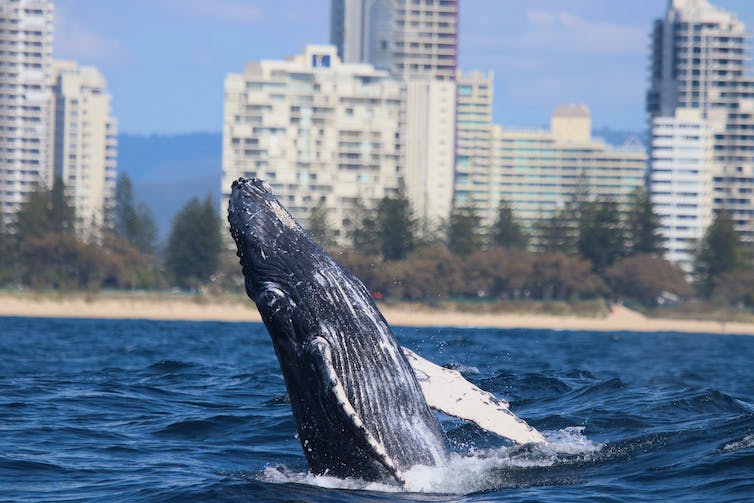 During one of our boat-based surveys on the Gold Coast, we encountered this acrobatic humpback whale calf, shown in the photos above. We counted 254 breaches in two hours, making it the record holder of most breaches in our 10 years of observation.

To check on whales’ health, we collect and study the air they exhale through their blow hole (‘whale snot’), and measure their size at different times of the year. The photo above shows me tagging a whale with CATs suction cup tags, to collect data on short term changes in their movement patterns. 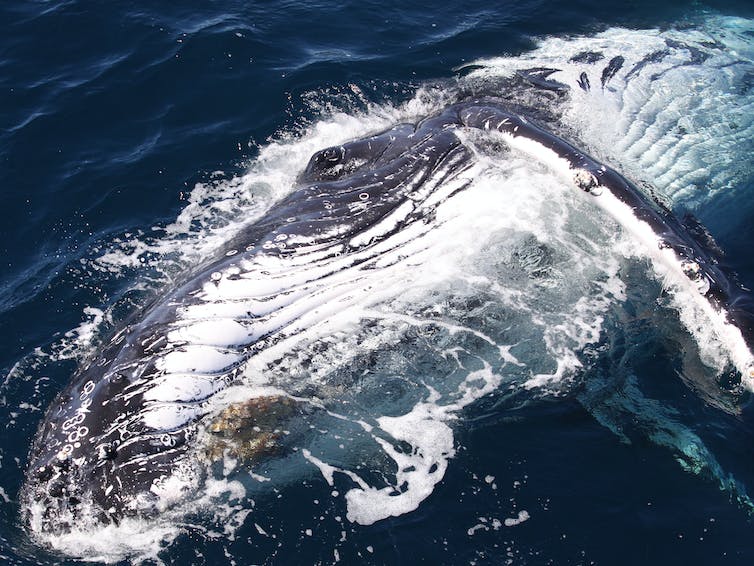 In regions where the whales adapt to ocean changes and, as such, move closer to shore for feeding and shift their breeding grounds, there’s a higher risk of entanglements and other human encounters. This is particularly concerning when they travel outside protected areas. 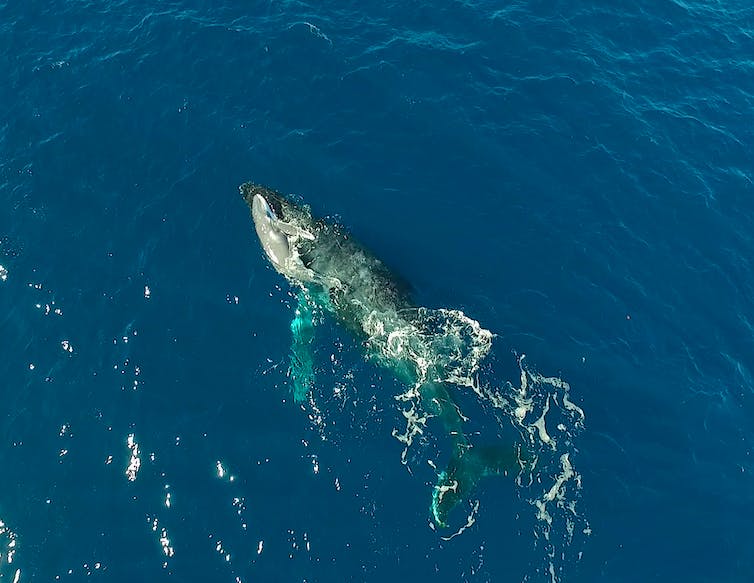 Look closely and you can see a newborn humpback, just one to three days old, resting on its mother’s head.

In the first days of life, baby humpback whales sink easily and aren’t able to stay on the water surface for long. They need their mothers’ support to stay on the surface to breathe.

Once they’ve gained enough fat from the mother’s milk they become positively buoyant (meaning they can float), making it easier for them to breathe. 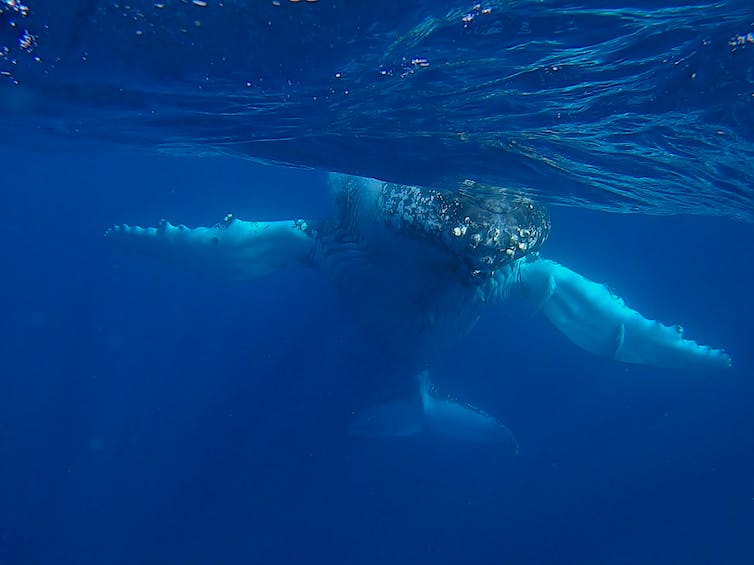 A final note – during one of our land-based whale surveys this year, a keen whale watcher approached us, and we helped him find the whales with our binoculars. I will never forget the joy in his face when he spotted them.

It’s a joy I hope many future generations can experience. To ensure this, we need to understand how we can best protect whales in a changing climate.

Have you made personal adjustments to your life or purchases to address global warming? Is your super fund supporting ethical businesses and industries?

When life’s ups and downs are a joyous ride

Being a country boy, I was always fascinated by that marvellous transportation device - the

Home security tips from an expert

Expert explains how to keep your home and garden as secure as possible.

Easy ways to get rid of pet hair in your home