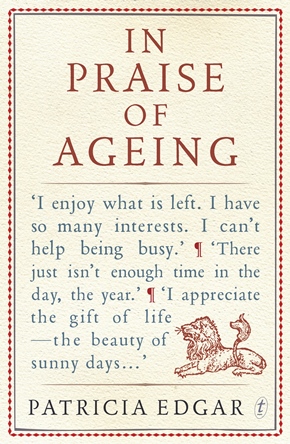 In Patricia Edgar’s groundbreaking new book, In Praise of Ageing, you’ll meet Jim Brierley, who is still jumping out of planes aged 89. And Muriel Crabtree, whose exhibition of pastels was opened by the governor-general shortly after Crabtree died, aged 102.

Australians are staying healthy and living longer than ever before. Yet rather than focusing on the productive, rich and varied lives older people lead, we dwell on the burden of ageing.

In Praise of Ageing tells the stories of eight people who have lived well into their eighties and beyond. They will inspire you, entertain you and motivate you to be connected, interested, risk-taking and inventive. They will challenge your preconceptions. And they will convince you that 50 is now the second half of life and not the beginning of the end.

Edgar argues that the ramifications of an extended life span mean no less than a revolution for education, work patterns, career and financial planning, and lifestyle choices. She believes Australians entering the longest stage of their lives will form a significant power base and challenge society’s stereotypes.

‘This book is bursting with intellectual energy: if Edgar’s rational arguments don’t convince you, her human stories will.’ Hugh Mackay

Patricia Edgar is a sociologist, educator, film and television producer, writer, researcher, and policy analyst. Through a career spanning four decades she has been at the forefront of media for children nationally and internationally, winning multiple awards for her achievements and programs. In this book she turns her attention to ageing policy in Australia.

Exclusive to YOURLifeChoices members:  Receive 10 per cent off every purchase of In Praise Of Ageing from the Text Publishing website. Just enter the special code ‘INPRAISE’ at the checkout page to redeem your discount. Offer ends 30 October. Free postage included.

In Praise of Ageing – Patricia Edgar