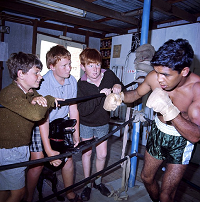 Since suffering a stroke in 2007, Rose’s health had deteriorated and he died on Sunday, aged 62.