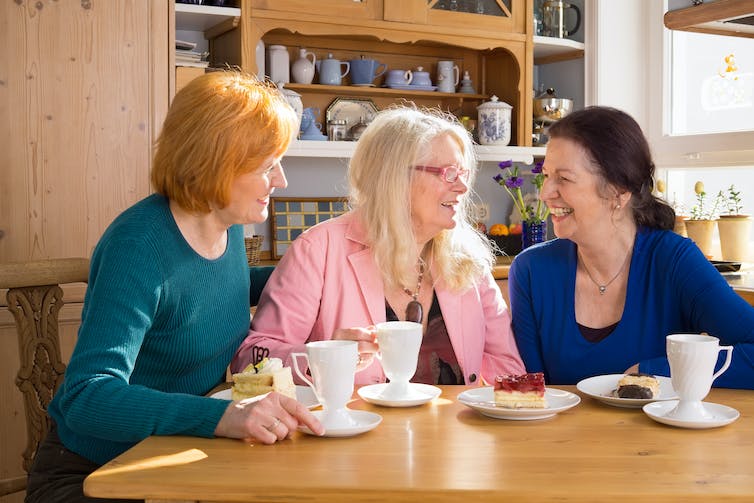 An increasing number of older Australians are living in share housing. A relatively new group to emerge on the share-housing scene, they are choosing to share for financial reasons, but finding unexpected social benefits.

Share housing has traditionally been associated with student housing and media depictions of the share house as dysfunctional, chaotic, “He Died with a Falafel in His Hand” scenarios. But a growing number of older people are sharing housing.

This trend is part of the growth in share housing across an increasingly broad demographic as professionals aged in their 30s, 40s and onwards continue to share house or return to share housing into later life. Generation Rent is fast becoming “Generation Share”.

Read more: Moving on from home ownership for ‘Generation Rent’

The growing trend of share households is attributed to a combination of shifting social norms and a decline in affordable rental properties. This is particularly acute in our capital cities but is also evident in regional centres.

An emerging group of tenants – professionals, couples, young families and students – who cannot afford to buy or rent an entire property of their own are increasingly turning to shared occupancy as a way to afford housing. Home owners are also noted as a group for whom shared occupancy has benefits by generating extra income for mortgage repayments.

My research on share housing across all age groups shows it’s mainly driven by financial constraints. In older age, the experience of this is gendered. Although older men are sharing, women in particular are more vulnerable to significant financial constraints in old age.

Women are the fastest-growing group at risk of homelessness in Australia. Many have limited superannuation to draw upon due to time out of the workforce to raise children or manage the home. This means the ramifications of the gender wage gap are particularly visible in older life – to quote one participant, “a man is not a superannuation”.

Read more: Spirals and circles, snakes and ladders. Why women’s super is complex

A common scenario is people falling out of home ownership after divorce or a relationship breakdown. Without the family home and with limited material assets, share housing is one of a diminishing set of options for living affordably and securely.

Moving into share housing in later life can be an adjustment. Many older people are in share housing for the first time in their life, having previously owned their own home.

There are obvious social challenges inherent in this situation. These include learning to negotiate domestic spaces in new ways. And certainly many are vulnerable to being exploited by unscrupulous flatmates, head tenants, or landlords.

Similar to share-housing experiences among younger groups, older participants mentioned occasional household conflicts and were aware of the need for personal space.

But there are also social benefits

However, some also reflect positively on the social value of share housing. This has been an unexpected benefit for many of them. At an age when isolation and loneliness increase, this is particularly important.

Older residents value the social aspects and the new friendships that sometimes develop in share houses. Flow-on effects of this include an increase in their sense of safety and security, knowing that they are not alone should anything untoward happen.

Read more: Co-housing works well for older people, once they get past the image problem

Although share housing in older age has social benefits, its rise should prompt us to reflect critically on Australia’s housing market as well as rethinking retirement policy. Share housing is directly correlated to declining housing affordability.

For older people, the situation is particularly complex. Australia’s retirement policies promote home ownership as the pathway to a financially secure old age. That leaves the growing number of older Australians who don’t own their own home to experience increased financial stress.

The Australian Dream of the owner-occupied home is quickly becoming that – a dream rather than reality for many Australians. The cracks are starting to show. As people fall out of home ownership and the younger generations doubt they’ll ever own a home – they’re not called Generation Rent for nothing – Generation Share will present significant challenges for policy.

Read more: Home ownership foundations are being shaken, and the impacts will be felt far and wide

Have you considered shared housing for social as well as for financial reasons? Would you house-share or not? Related articles: Rent assistance explained Most-asked end-of-life questions Renters’ homelessness risk