There are four golden rules of the Marcus Today newsletter, never pass an opinion on religion, sport, or politics… so here is an observation. I find it quite incredible how antagonistic towards the major banks Scott Morrison and Treasury has become in such a short time.

Surely there is a relationship to be maintained between the Government and the banks? Surely the Government should be promoting an accord with the banking industry as a vital pillar of economic stability? But, caught out perhaps by its lack of groundwork and consultation ahead of the big bank tax announcement, the Government has been very publicly castigating them for not welcoming a random tax that appears to have been thought up in a light bulb moment ahead of the Budget. You can just imagine the conversation:

“But the Budget is in three days Boss!”

“Why don’t we get Apple or Google to pay some tax”.

“Don’t be stupid, they’re far too clever for us”.

“So why don’t we just get the banks to pay it”.

“Yeah but everybody hates them already, it’ll win us some votes, get the Labor Party off our back about a Royal Commission, it’ll distract everyone from the rest of the Budget and make sure the whole lot sails through Parliament”.

“You’re ScoMo Boss. You can do whatever you like”.

“But what about everyone’s super, the SMSF industry has 30 per cent of its retirement savings invested in the big four banks?”

“But what about Anna Bligh and the ABA”.

(High fives and schoolboy sniggers all round).

Another worry is that this breaks the seal for future Governments to randomly target any corporate, without notice, that is profitable. What next… higher tax rates for companies with a 20 per cent return on equity (ROE)?

But logic and politics aside, where does it leave the banks? This is the banking sector on a daily basis. The most obvious technical observation is that on a daily basis the relative strength index (RSI) is at 26 and the sector is officially oversold – the last time that happened was June last year and the sector jumped 31 per cent thereafter. The sector is already off 9.9 per cent. 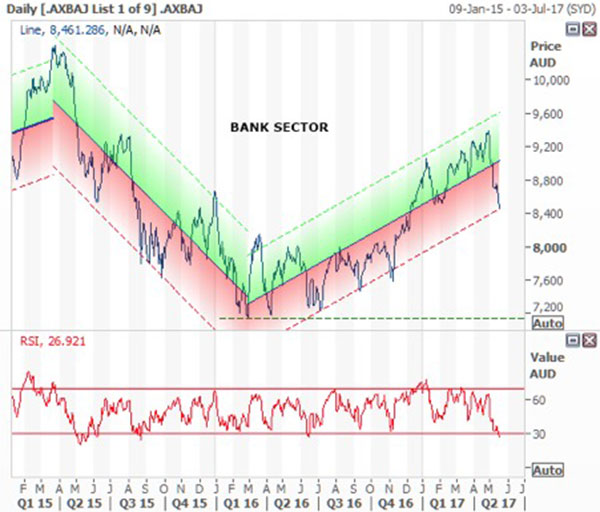 We have in fact dropped more than the seasonal norm in three weeks instead of in two and a half months. If this chart has any credibility it says the horse has bolted as far as selling the banks is concerned. To me this looks like a sentiment hole that is more likely to improve than deteriorate and to sell now is to give into fear. We should be looking to buy instead. It might be better to wait for them to start to rally before buying, there seems to be little rush after the dividends are gone and with the US market destabilising, but selling them now is following the herd not leading it. This is how you sell at the bottom. The sector will settle and remain a core income investment for retirees.

This is an opportunity not a disaster.

This is an edited version of Marcus Padley’s summary of likely effects of the Budget announcement on the banking sector share value. To read Marcus’s full report, The Bank Sector, visit Marcustoday.com.au

The information above is general in nature only and should not be considered financial advice. Before making an financial decisions, you should consult a qualified financial advisor who can tailor advice to your specific circumstances.