Global financial volatility was not enough to stop superannuation fund returns from soaring, with returns so far this financial year crashing through the 10 per cent barrier.

Australian super funds have been the beneficiary of a boost from local and international shares, a fall in the Australian dollar, a rise in full-time employment rates and expansion in the manufacturing sector.

Median balanced-option returns have held steady. Even a 300-point loss on Wall Street in mid-May hasn’t slowed the momentum of super fund returns, despite a mixed month in April. Australian and international shares have been solid performers so far this the financial year, with returns of 15.3 per cent and 15.6 per cent respectively. However, despite all this optimism, significant economic risks remain.

“Economic indicators remain robust, although weaker inflation figures may be of some concern to investors as well as central banks,” said SuperRatings Chairman Jeff Bresnahan.

“We have not seen the strong boost in confidence many have been hoping for, but neither have we seen any sign of a sustained pullback or dramatic loss of momentum. Despite the fact that significant risks remain, including in the housing market, the outlook for 2017 remains somewhat positive.”

“It would be a great result to achieve a double-digit return for the financial year, but we still have a bit longer to go,” said Mr Bresnahan.

“Volatility has begun to increase in line with continued political uncertainty globally, and market momentum is positive. However, investors should be careful not to under-price risk in this environment. In other words, we should not get too complacent.”

“Interestingly, equity market gains have coincided with a fall in yields in major markets, as well as a fall in the US dollar,” said Mr Bresnahan. 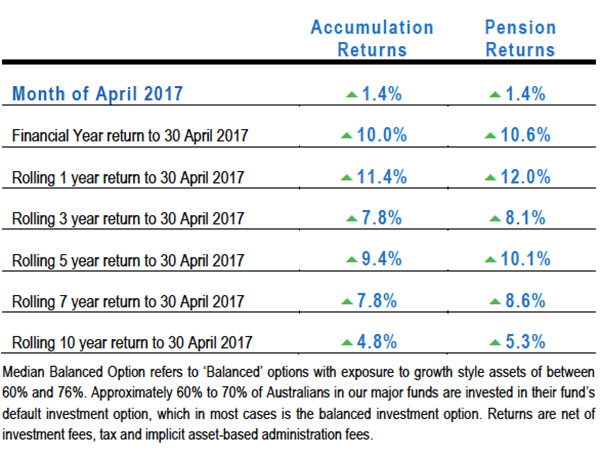 Read the full report at SuperRatings

Has your super fund soared? Are you happy with your returns?