In the strongest signal yet that bank executives could be forced to take responsibility for their unlawfulness, the Treasurer yesterday morning hinted that they could be imprisoned.

Scott Morrison told journalists that banking and financial services executives who lie to the corporate regulator could face penalties, including jail time.

Commonwealth Bank private wealth chief Marianne Perkovic also fronted the banking royal commission and acknowledged that Commbank had, like AMP, also been charging for financial advice that was never delivered to clients.

But unlike Ms Perkovic’s reluctant admission, Mr Regan readily agreed that AMP had been less than ethical.

The confessions were extracted by Michael Hodge QC, Senior Counsel assisting the Royal Commission into Misconduct in the Banking, Superannuation and Financial Services Industry, during his interrogation over AMP’s 90-day fee policy.

Mr Regan revealed AMP was knowingly charging some clients for financial advice they were not receiving, in contravention of ASIC regulations.

The ABC reported yesterday that Mr Morrison was “deeply disturbed” by revelations emerging from the royal commission.

“They have said that they basically charged people for services they didn’t provide and they have admitted to statements that were misleading to ASIC and to their own customers, and this is deeply distressing,” Mr Morrison said.

“This type of behaviour can attract penalties which include jail time. That’s how serious these things are.

The corporate watchdog followed the Treasurer’s remarks with a statement that it had been investigating AMP, but would not comment at this stage.

Yesterday morning, it was another AMP executive, John Keating, who felt Senior Counsel Hodge’s blowtorch, this time over wealth management platforms that appeared to put clients into a holding pattern.

“You knew that they were being charged a price uncompetitive with the market, but decided not to adjust your price?’’ the barrister asked, to which Mr Keating replied: “That’s correct.”

According to ABC reporting, AMP’s Platform Development Head then explained that the company was “focused on its newer products, but it appeared to have made no/little attempt to move existing customers from the more expensive legacy products to better value newer ones”.

Tweeting on the legacy products, Fairfax reporter Sarah Danckert wrote: “AMP’s wealth management platforms sound like the Hotel California. You can check in, but you can never leave (without paying a massive capital gains tax bill).”

The other major banks will front the royal commission in coming days.

Opinion: Should bank boards get away with disrespecting your super?

The damage to AMP’s brand during the banking inquiry grilling this week has naturally translated into a shredding of the stock’s value.

News service Reuters’ graph illustrates and compares how the stock prices of the Big Four banks and AMP have fallen since the royal commission was announced … and it ain’t pretty. 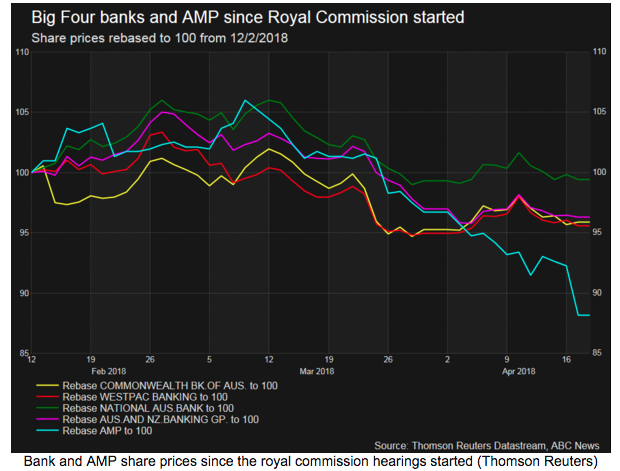 AMP shares have lost $3 billion in value since early March. Put another way, the $1 slide to yesterday’s closing price of $4.45 is equal to $500 million in losses a week over the past month and a half.

Being one of Australia’s biggest financial services companies, you can bet your bottom dollar many if not most superannuation funds, including yours, will own a slab of AMP. While the share rout will not bankrupt super funds, your savings will likely take a hit.

With all the brouhaha around how the Big Four and AMP have ripped millions of dollars off customers for fake advice, there hasn’t been anywhere near as much of a murmur about how those saving for retirement have also been burnt.

Maybe it is time for those sitting in Mahogany Row – the chairpersons and directors on the boards – to answer questions. While it is all very satisfying to watch bank executives being grilled, at the end of the day they are employed to make money and enrich shareholders.

And even if they do get chastised by the corporate watchdog and others, most will already have exit strategies. Certainly there are many chief executives who had already given some thought to not having to walk around for too long with egg on their faces; AMP head Craig Meller leaves at the end of 2018 and CommBank’s Ian Narev is handing over to a new boss this month, joining the slew of that bank’s executives who have walked. Across at ANZ, deputy chief executive Graham Hodges and chief risk officer Nigel Williams are also leaving this year. There is no suggestion that these men will be accused of wrong-doing, but no doubt they won’t be the only ones heading for the exit door after the royal commission concludes.

Less common is for a whole board to roll over. But should that be the case? Perhaps the directors should be more accountable for the misconduct. After all, the boards are supposed to be the companies’ ‘culture police’, ensuring those they preside over stay honest and true to rules laid down by the Australian Securities and Investments Commission.

Mr Eslake told YourLifeChoices: “Ultimately, it is the board that takes responsibility.”

Year in year out, board chairmen write glowing reports of the achievements of their bank chief executives, congratulating them for returning bumper after bumper billion-dollar profits. In light of the royal commission revelations so far, perhaps the powers that be ought to be asking boards and their chairs to ‘please explain’ any link between these profits and the misconduct that they had overlooked.

Do you think bank executives should be jailed if they are found to have flouted the regulations? Have you been charged for financial advice you did not receive?

Related articles:
Revenue a priority for AMP
Get tough with your planner
Bank bosses to be grilled