Amid the seemingly heightened seismic activity occurring around the world lately, an academic last month issued a chilling warning that parts of Australia, especially Melbourne, may not be immune from a catastrophic volcanic eruption.

The unlikely prediction from the Australian National University’s Dr Richard Arculus was based on computer modelling rather than any actual evidence that there is lava bubbling up to the surface in the Victorian capital.

But 4000km south-west of Perth, a volcano on Heard Island, which is Australian territory, is erupting right now.

Fortunately, the Australian mainland is just outside what is known as the Ring of Fire – which is actually a horseshoe-shaped, 50,000km stretch around the Pacific Ocean rim. 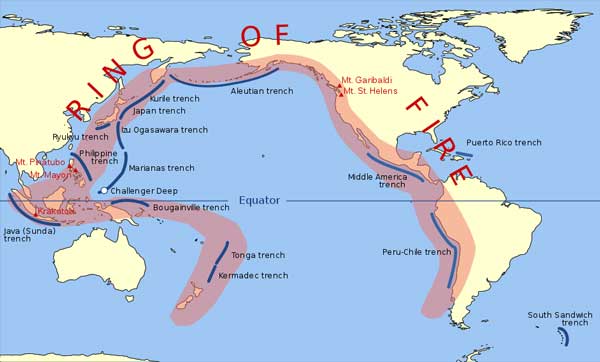 Many other countries are not so lucky. In fact, some popular holiday destinations sit right in the middle of the ring. The geology of this volatile region is characterised by volcanic belts, hyperactive tectonic plates and oceanic trenches.

It seems this year, the ring has been more active than usual with clusters of earthquakes and volcanic activity claiming thousands of lives and flattening several Pacific rim cities.

In just the first three months of 2017, tectonic shifts were detected as follows:

Many offshore earthquakes have lead to fears of tsunamis and devastating floods.

If you are planning an overseas holiday and not feeling particularly intrepid, it might be an idea to first check out the list of volcanoes that are presently active, just to be safe.

But if throwing caution to the wind is more your style, then at least check out whether your travel insurance covers you for a brush with a catastrophic event.

Have you travelled to Bali recently? Are you worried about getting stuck in an earthquake or volcanic zone? Have you survived a catastrophic natural disaster?