Australian super funds have suffered their second consecutive monthly decline in returns, with global market volatility shaking up the industry in a way that hasn’t been seen in 10 years.

But there is some news, with median balances well ahead for the financial year to date, compared with last year.

With this in mind, superannuation remains one of the best investments over the last decade.

Super funds that invest in Australian shares only have been hit hardest, with a -3.1 per cent decline in returns over March.

Balanced options had interim returns of -0.7 per cent, with members in a growth option copping a -1.1 per cent fall.

However, super members with a balanced option are still ahead so far this financial year, with overall growth of 5.7 per cent and a rolling one-year average of eight per cent.

The report shows that being in the right fund makes a major difference, though, with the best-performing funds outperforming the worst by more than $50,000 over a 10-year period.

SuperRatings Chief executive Kirby Rappell says that despite the ups and downs of super, it remains one of the best investment strategies around, but Australians may have to get used to volatility.

“That latest market turmoil has had a short-term impact on super returns,” said Mr Rappell.

“However, it remains overwhelmingly the case that superannuation continues to deliver strong returns to members over the medium to long term and is one of the most important sources of wealth for Australians.”

“Volatility is undoubtedly emerging as the new normal, presenting an environment that many super members have not experienced in a decade. This volatility needs to be managed but no one should lose sight of the fact that super continues to deliver strong returns.”

SuperRatings data shows the top 10 performing funds over the past10 years. 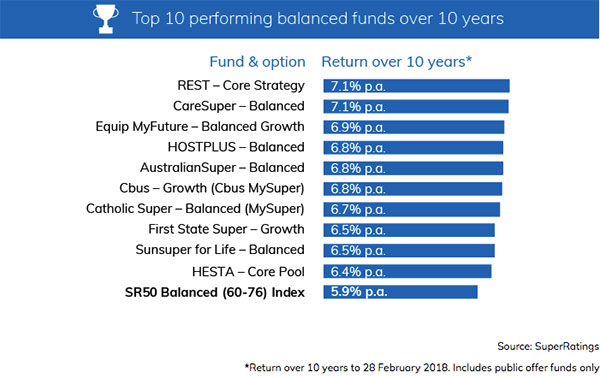 How has your fund performed? Have you become used to smooth-sailing super? Will you ride out this storm or switch your investments?

Related articles:
How is your super fund stacking up?
The risk in switching super funds
Don’t panic over share losses