The cost of staying connected is increasing, with many Australians overpaying for their broadband by as much as 58 per cent, according to new research.

Australia’s wholesale broadband provider, NBN Co, recently lodged a submission with the Australian Competition and Consumer Commission, proposing price increases that would suggest basic broadband prices could double over the next 10 years.

“NBN’s wholesale prices are already the highest in the world among comparable countries and they’ll get worse with the proposed price increases,” a spokesperson for Telstra told The Guardian.

Now, analysis from consumer research group Mozo has revealed many Australians could already be paying far too much for broadband.

Read: What to do when your internet is slow and patchy

“As cost of living pressures continues to hit home, taking the time to compare your personal finance products such as your home internet and looking for potential savings can really pay off,” says Tom Godfrey, Mozo spokesperson.

We found something as simple as comparing broadband plans online and switching to a more competitive offer could significantly cut your costs.”

As part of its 2022 Mozo Expert Choice Awards, the group analysed 79 broadband providers and found there is a $1194 per year gap between the most expensive and least expensive plans, for what is essentially the same service.

For customers wanting 5G home broadband, customers could save as much $1114 annually.

The big winners at Mozo’s award ceremony were not exactly household names when it comes to broadband providers.

Broadband Provider of the Year was taken out by Flip, while Belong took out awards in the Standard (NBN 25) and Fast (NBN 100) speed categories and MyRepublic won the SuperFast (NBN 250) and Ultra Fast (NBN 1000) categories.

“While you might not have heard of some of these smaller broadband providers, it really does pay to look past the well-known names and seek out those offering potential savings,” Mr Godfrey says.

Really think about how much the internet will be used in your house, as this will help you choose an appropriate download speed. You may be paying too much for speeds you’re not making use of.

How many people are in your household? And how many will be using their phones, streaming services or laptops at the same time?

“As a general guide, 50mbps is appropriate for a household where one to two people may be watching TV or listening to music,” Mr Godfrey says.

“If you have a larger home with numerous users online at the same time, 100mbps could be a better option.”

There are more than 140 different NBN broadband retailers in Australia, all essentially selling the same product, so it pays to take a look at some of the smaller names. They could just save you money. 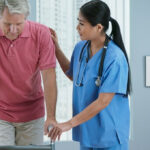