One of our members was recently caught off guard by a new email scam and nearly fell victim to it. So, we show you how to recognise this new threat and avoid losing thousands of dollars.

Glen sent us an email recently after he received an email from the Australian Federal Police (AFP) informing him that he had been fined $150 for ‘negligent driving’.

After remembering some of the advice we had given previously on staying safe online, and before clicking on anything, Glen sent us a screenshot of the email to ask if it was a scam.

It turns out that it was, indeed, a scam, and it’s been making the rounds nationwide, locking people out of their computers and demanding thousands of dollars to let them back on, as otherwise, it will delete everything and possibly even break the computer.

This type of scam is known as ransomware and it’s becoming more commonplace as people begin to rely more and more on their technology – because they are more likely to pay large sums of money to protect it.

The AFP has issued a media release warning people of this new scam and advising those who have received it to run a virus scan in case your device has been infected.

“Payment of this Traffic Infringement Notice will not go to the AFP, your money will be going to scammers overseas.”

“Many people have been compromised, so I would urge people to be vigilant”.

“The AFP never sends out traffic infringement notices via email”.

Below is an image of the scam email. 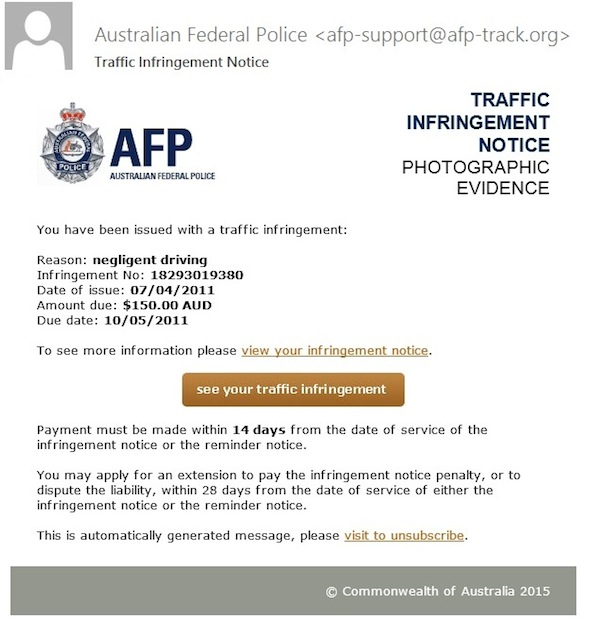 If you think you may have received this email, be sure to scan your computer with up to date antivirus software, and even if you haven’t received it, it might be a good idea to check out some of Drew’s advice for avoiding email scams.