Are you tired of remembering hundreds of different passwords? Well Google is tired of hearing about it and is testing new technology that may see the password become passé by the end of 2016.

In light of massive breaches of online security, such as the recent attacks on LinkedIn, Myspace and Tumblr, as well as rising instances of cyber-attacks by savvy hackers, Google has gone back to the drawing board in relation to password authentication.

This could be good news for many, especially those who really have very little idea about what makes a strong password. For instance: after the 2012 LinkedIn hack, it was discovered that 750,000 of the 167 million hacked accounts used the password ‘123456’, followed by over 170,000 accounts with the password ‘LinkedIn’ and more than 144,000 using the password ‘password’.

So Google has announced a new authentication feature called Trust API, which begins testing this month. Trust API, otherwise known as Project Abacus, aims to mix biometric indicators, such as the shape of your face and your voice patterns, with less obvious, ones such as how you move, how you type or how you swipe your screen, to create a super-secure alternative to character-based passwords. As a fall back, though, there will still be the option for a text-based password, should your biometric authentication fail.

The service will continually monitor you and, whilst accessing your smartphone’s internal sensors, will keep track of your every move, to ensure that you are who you say you are at all times. It even gives you a trust score to show you that, well, you are you. 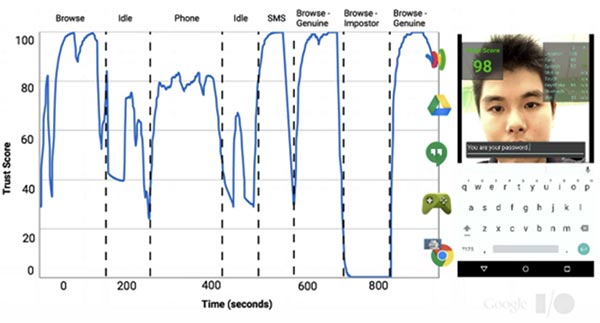 Usually any one of these indicators would not be enough to ensure security but, combined, Google says it could be more than ten-times as secure as a fingerprint.

According to Richard Lack of customer identity management firm Gigya, “biometric authentication is a powerful enabler, allowing businesses smart enough to deploy it to significantly increase rates of registration, gaining data and insight about their customers, while also increasing customer security. This is a win/win scenario which sounds the death-knell for awkward and insecure passwords sooner than we may imagine.”

What do you think of this new technology? Do you consider it invasive? Or would you welcome the opportunity to never have to remember another password again?

Read more at The Guardian.

A Russian gang has stolen over one billion usernames and passwords.

SplashData has revealed its 2015 list of the worst passwords

SplashData has released its annual ‘Worst Passwords List' for 2015.

The personal data of 425 million internet users has been hacked and sold online.