Media is reporting that the assault allegedly took place on Saturday night at the couple’s home on Sydney’s northern beaches and Phelan voluntarily presented himself to Manly police station on Monday night.

Seven announced that Mr Phelan was immediately stood down from hosting The Daily Edition, a show that is finishing up this Friday, with Seven’s breakfast show Sunrise announcing that he had been sacked by network bosses.

At the start of Tuesday’s show, The Daily Edition host Sally Obermeder spoke out about his departure.

“Before we go on, I want to take the opportunity to address Ryan Phelan’s absence from the programme,” she said.

“Ryan will not be returning to The Daily Edition, due to the serious allegations that have been made against him.

“The network was unaware of these allegations until notified last night.

“We are all understandably shocked by the situation, but as the matter is now before the courts, we won’t be commenting further.”

Do you watch The Daily Edition?

I do occasionally - I have always respected his views on Sunrise and must admit he came across as being a very resonsible person - I am surprised that this has taken this unfortunate turn - I would wait to see what actually happened - there are 2 sides to this story and it doesn't always prve to be what is alleged.

A very unfortunate set of circumstances for Ryan Phelan. I once new Ryan in Brisbane years ago and he always came across as  very down to earth likeable young man. He's come a long way from co-hosting segments on Horse Racing and Harness Racing on Brisbane Channel 31. As stated by Alinda, there's always two sides to every story. A simple push or shove in an argument often fuelled by alcohol can be blown out of proportion and result in cries of assault. For Ryan sake let's hope this is the case and all chargers dropped in time. If not, it's a very unfortunate and sad set of  circumstances for both of them, ruining Ryan's life and to a lesser extent his career. Jacka.

This is a court matter and we should not know or make jugments until it is done.

The media should pull their heads in until the facts are there.

A simple push or shove fueled by alcahol, or drugs or the fact that you had a stressful day is not an excuse for any kind of physical violence.

This excuse is used buy lots of criminals when they have accidents and kill someone on the road or when they rob someone and when they are violent.

I feel if grog or drugs are and excuse for any bad behaviour it should mean an immediate fine of $10,000 and then have the rest of the charges seen to.

Before irresponsible articles like this are distributed it would behove the poster/writer to wait until there is proof of any wrong doing. In this day and age, ANY allegation is enough to ruin the livlihood of the accused regardless of the veracity of the accusation. Just because an allegation has been made does not mean the alleged perpetrator is guilty.

Now wait for the keyboard warriors go into battle on the 'believe all women' domestic violence bandwagon.

I have noticed this concerning trend too KSS.  It isn't limited to domestic violence cases.

Almost nightly on the news there is a story about someone who is suspected of something or other, some as serious as murder even, without there ever having been a charge laid, let alone guilt proven.   How often do we hear about 'a person of interest' in some quite serious crime?

Actually KSS, my reading of the article was just a factual statement of facts, no assertion to the veracity of the allegation. The issue of your post is whether we want justice (and I use the term loosely) to be open and transparent (except in exceptional circumstances such as involving children) or hidden behind a  legal barrier.  I vote for open and transparent.

A bone of contention may be whether Channel 7 should have sacked the person in question or put them into a non-public role until the case is resolved. I suggest Channel 7 acted precipitously, I believe a person is entitled to the presumption of innocence until anything otherwise is established by a legal process.

Totally agree with Eddy. Channel 7 seems to have jumped the gun very quickly on this one. With their usual gutter journalism, one would think they'd give their own employees the benefit of the doubt until the final roll of the dice. They may know more of this incident then they are saying, however as a point of law I believe he should remain an employee of Channel 7 until a verdict of a judge is given. Jacka.

In my opinion it is TRIAL BY MEDIA 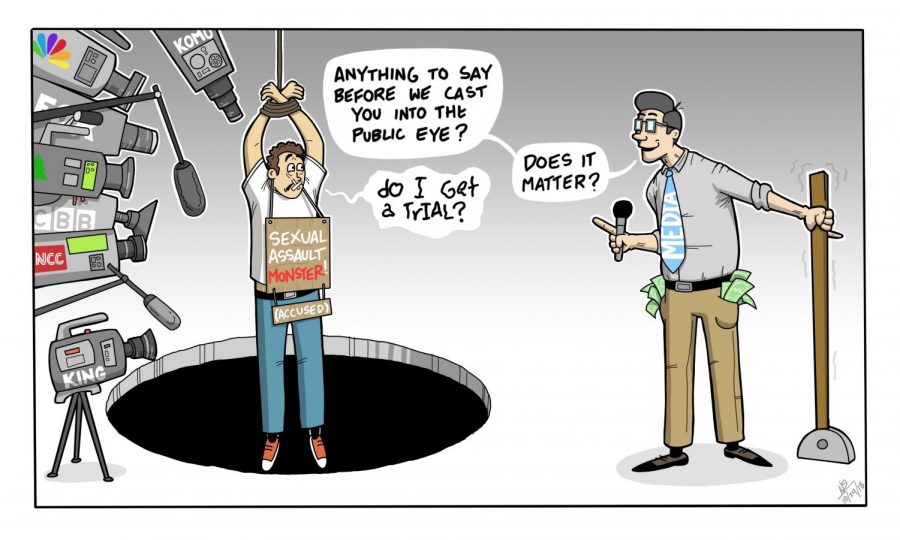 If the matter goes to court, how will they find a fair Jury ??

.... the public will be already biased.