So we have at least six cruise ships sitting off the NSW coast, refusing to go home, even though Australia has refuelled/restocked them for the voyage and removed to ICU any sick crew/passengers.

Carnival is appealing to our government to reconsider  and repatriate hundred of crew and passsengers but Australians elsewhere around the world are not being helped buy other less "soft touch" countries, are they?

Anyone else fed up with stupid travellers/cruisers who still went on holidays in the middle of a global pandemic? We had to cancel our holiday plans, at considerable expense, and now we have to risk all we have done here in Australia because of greedy cruise companies allowing cruises to continue when they should have been stopped a long time ago.

And now we have the whingers in the hotels, the people  finally returning from overseas...one woman complained that the food she received was "carb overload".!  Really, lady?

If these foreign crew and passengers are allowed off the ships ( not inccluding the severely ill, of course, they must be helped) we are really in trouble. We will not be able to cope with the surge in illness.

I await criticism from those of you who feel we should welcome every fool who enters our waters but I do not care. We are a soft touch.

The Artania has finally left port after a protracted stand-off with state and federal authorities and following an operation this morning where crew and passengers were ferried to and from the Artania.

Some 36 European crew members, including musicians carrying their instruments, were brought to a hotel in Perth's CBD to undergo coronavirus monitoring. The group is expected to fly out of Perth tomorrow, along with around 25 other passengers who were already in a Perth hotel, on a charter flight organised by the cruise ship's operator.

Buses this morning took another 63 people — 55 passengers and eight crew members— from the city back to the Artania. Before the ship left, two crew members were married on the wharf in Fremantle, just near the Artania's gangplank.

A group of Perth school children has written heartfelt postcards to each of the crew members left on the Artania cruise ship, wishing them a safe journey home. "These pictures and messages have brought a bit of warmth and love into our hearts during this challenging time!" the Artania's captain, Morten Hansen, said on Facebook. "Thank you, kids, very much for the nice words and next time we are here we are looking forward to seeing your charming city."

...but somehow I think that one will e more extended.

As the coronavirus pandemic continues to spread, the sea has now been emptied of its cruise ships and their millions of passengers. Except for one.

The MSC Magnifica, has just docked today in Marseilles, is the final ship still sailing with passengers, the New Zealand Herald reports. It’s been quite a reposition. The last time her 1769 passengers were allowed to disembark was in New Zealand on March 10.

With the Pacific Princess and Costa Deliziosa, having finished their sailings on Sunday in Los Angeles and Genoa respectively, the Magnifica was the last ship left at sea. It seems she might have this title for quite some time.

Wow I bet the crew are in need of a rest.

In view of the fact that the government says they can track COVID 19 in sewage and the cruise ships empty their sewage in the ocean where they are ...

It then would suggest to me that the water surrounding the cruise ships would be contaminated ?

Hence people swimming in it  or eating seafood out of it could also get contaminated ?

Why was Princess Ruby shifted from Sydney to Port Kembla ?

Is it because of the water desalination plant in Sydney ?

The Ruby Princess leaves Port Kembla in Australia bound for the Philippines. 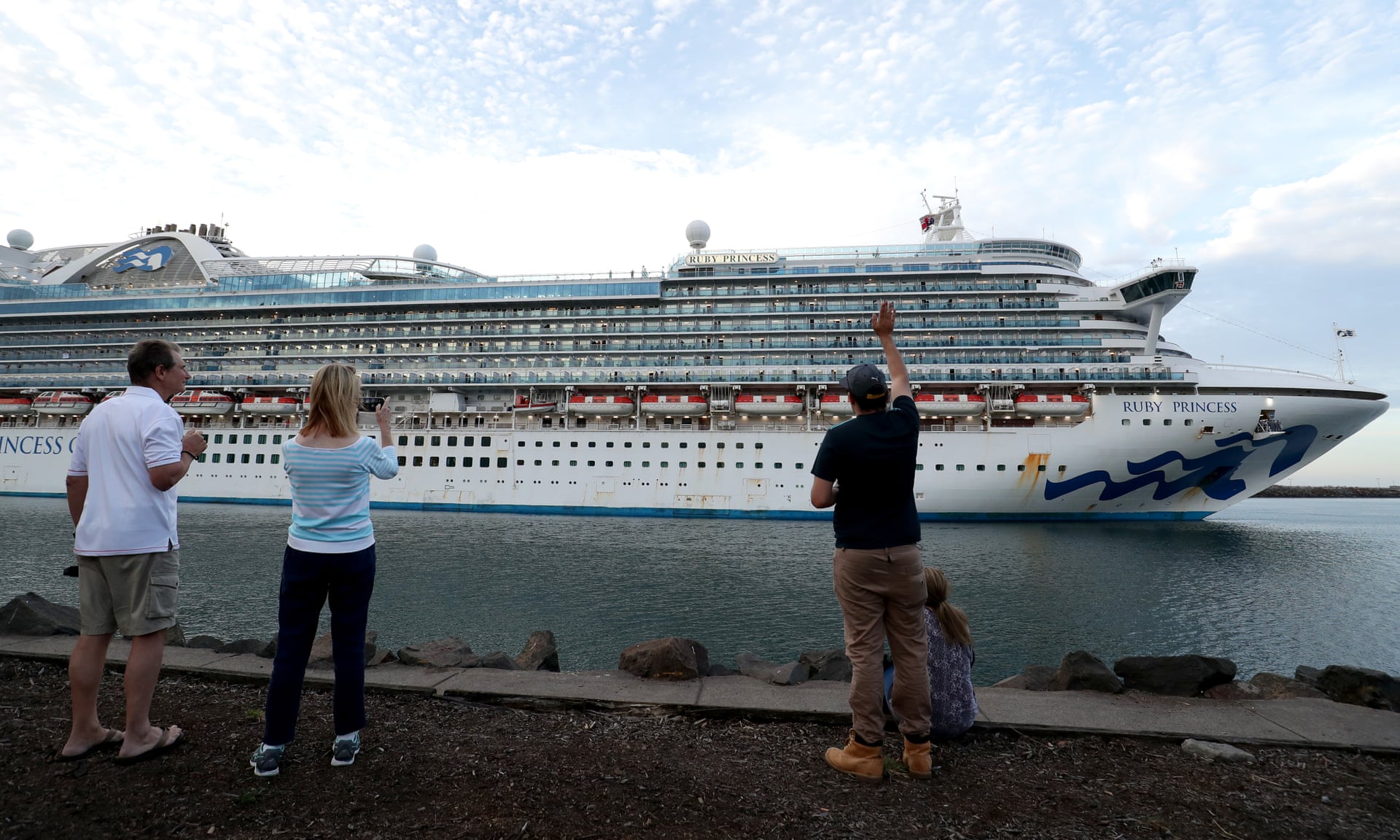 The ship left Port Kembla just before 5pm on Thursday, after a month in Sydney in which it has been linked to more than 600 cases of coronavirus and 21 deaths among passengers who took its final cruise to New Zealand in March.

Crew on board the Ruby Princess say they are worried for their health and have been “left in the dark” as the virus-hit cruise ship left Australia for the Philippines with about 500 on board. So far, more than 190 crew have tested positive for Covid-19 and the 1,100 crew have been in varying lengths of quarantine on board for weeks. Around 370 crew members have disembarked for a charter flight to the Philippines organised by Princess Cruises. A spokeperson for Princess Cruises said announcements had been made on board.

Bet people of Port Kembla will be relieved

At least three groups of cruise ships, with 15 in total, are clustered together off Coco Cay and Great Stirrup Cay in the Bahamas and about 12 are off the coast of Manila, in the Philippines.

Stranded at sea: 70,000 crew members are still stuck on board more than 100 cruise ships begging to go home amid the coronavirus pandemic

Tens of thousands of crew members worldwide are still on cruise ships out at sea. Workers are confined to cabins aboard ships and most of them are no longer being paid after contracts expired.

It is still out there!

A passenger of the Ruby Princess who tested positive to coronavirus is suspected to have carried the "dormant" virus for almost 10 weeks before falling ill.

The woman was diagnosed in Cairns on Monday, taking the total number of Queensland cases to 1057, with just 12 remaining active.

Authorities suspect she is the latest coronavirus case to have carried the inactive virus and become sick weeks after exposure.

Last week another woman in Queensland was diagnosed two months after returning from India.

"We are monitoring that very closely to work out if it's directly related to the Ruby Princess or if it was acquired in some other way,"

Was contagious since she left the ship on March 19.

Did you watch 4 Corners last evening on the ABC?

Cannot get the ABC site to work the programme from last night, this is all there is there now:-

Outbreak Onboard: How fear and disease spread on the Ruby Princess

“My opinion is that they should put it somewhere out in the middle of the ocean and sink it.  You're not getting me on a cruise ship ever again.”  Passenger infected on the Ruby Princess

On the 19th of March, thousands of passengers disembarked from the Ruby Princess cruise ship in Sydney harbour.  Their “luxury” cruise holiday had been cut short after authorities announced cruise ships would be banned from Australian ports as part of measures to stop the spread of coronavirus.   Passengers mingled in groups on the shore before dispersing around the country and overseas.

Far from protecting people, the release of the Ruby Princess’s passengers instead triggered a public health emergency with the cruise ship now named as the single largest source of Australia’s coronavirus infections.

“I can't think (about) who I infected. I can't.  I just can't do it. I’m sorry if I did and if it caused somebody to get sick or to die.”  Passenger infected on the Ruby Princess

On Monday Four Corners investigates how the Ruby Princess became an incubator for infection, leaving its passengers and staff dangerously exposed.

“As far as I'm concerned, they put the mighty dollar first and they never put our safety first.”  Passenger infected on the Ruby Princess

Owned by the world’s largest cruise company, Carnival Corporation, the Ruby Princess was one of a fleet of cruise ships operating as the pandemic gathered speed.   The company was well aware of the risks.  Only five weeks earlier, a sister ship, the Diamond Princess, created world headlines when its passengers were trapped on board as the virus spread.

“You're enclosed, you're breathing in this air…It could be anywhere, you know? You're hiding from something you don't know and where do you hide?”  Passenger infected on the Diamond Princess

Four Corners examines the crucial decisions made by the cruise operator as they continued to take people to sea.  In interviews with passengers on multiple voyages, an alarming picture emerges.

“Ship life was the same. There was entertainment all throughout the day and the night. Nothing had changed whatsoever.”  Passenger infected on the Ruby Princess

Four Corners also investigates the actions of Australian authorities who allowed the ship to dock and the passengers to disembark, taking the virus with them.

“The Australian authorities should have been put on notice as any other port authority at that particular time that cruise ships coming in were potentially going to be sources of the virus and that steps needed to be taken.”  Lawyer

With the cruise company already busily marketing future cruises once the pandemic restrictions are lifted, some of those infected with the virus say action must be taken.

“Somebody needs to be held accountable…because they have a duty of care, or supposedly a duty of care to look after their passengers…I nearly lost my life.”

Outbreak Onboard, reported by Elise Worthington, goes to air on Monday 25th May at 8.30pm. It is replayed on Tuesday 26th May at 1.00pm and Wednesday 27th at 11.20pm. It can also be seen on ABC NEWS channel on Saturday at 8.10pm AEST, ABC iviewand at abc.net.au/4corners.

Was reading somewhere how some of the Australian cruise ship entertainers are finally getting home after months of being left on the ships.

People have been brought back from all over the world from holidays and working because of the virus, why are these people working on crews ships left till last?

Roman Quaedvlieg has broken his silence on Australia's response to COVID-19, two years after he was sacked from his $617,000-a-year post for helping his girlfriendSarah Rodgers get a job as a passport scanner at Sydney airport. They are pictured outside Sydney's Downing Centre Courts in July 2019 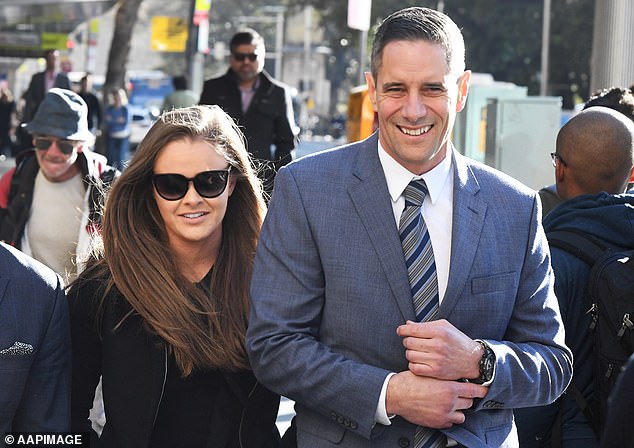 Not only cruise ships but cargo ships and carriers like we have in Fremantle now; first there were 6 members of the crew ill with the Caronavirus now that number has doubled over night!   They are now talking about flying new crew out to Perth to take over the vessel and sail it back home, there are around 56,000 live animals waiting to board the ship;  I do feel sorry for them I wish I could let them loose rather than let them board this vessel for a hazardous journey.