Have your say on the banking Royal Commission

Many of you have shared our view that the Government should iniitiate a royal commission into banking and finance. So, now that we have one, how do you feel about it?

Why not share your thoughts and we'll choose the best ones for publication?

“The banks run our finances. They run the government. Now they want to run their own royal commission, via their major Canberra branch, the Liberal Party.”

sums it up nicely don't you think?

another good article on our rotten banks .....

Did the Unions get to sit down with the government and discuss how their Royal Commission should be managed?  I can sense a faint smell in the air and by the end of this process it will be a stench.

Maybe the banks want this now because they will be able to manipulate the process and the outcome.  Something that would not be so easy under another government.

What makes you think that the Banks will have any input of the terms of the Royal Commision into the Finance Industry?

Brocky the short answer is because they did.  Why else was macro-prudential policy taken off the "to look at list" for recommendations.

Why were the Industry Super Funds particularly targeted when what everyone else was asking for was to look at the "Banking" industry.

How did MT and Co release a full list of Terms (even if draft at this time) within hours of the Commission being announced a day after he said a Commission was not on the cards.

Too fast a response to be anything but planned.

Being very ignorant of economics Gravy , if macroprudential/systemic risk regulation is the approach to financial regulation that aims to mitigate risk to the financial system as a whole ... where in the draft RC wide Terms of Reference is it indicated/or not indicated that a closer look at our system will not prove beneficial to the public's perception of our economic 'financial pillars' integrity and the financial stability of our system as a whole in the long term?

Agree re planning. Of course it was planned IMO. The RC's been 'on the books' for quite a while now. Think anyone would be an idiot if they didn't 'have a plan' for a threat looming on the horizon ... isn't that what risk management and future planning is about?

The following are taken from the terms of reference:

"6. The Commission is not required to inquire into, and may not make recommendations in relation to macro-prudential policy, regulation or oversight."

From the Guardian also comes this piece in an article which reflects my concerns:

"The two men [Malcolm Turnbull & Scott Morrison] could hardly have done more to express a hope that the royal commission would not actually find any wrongdoing. And given that the draft terms of reference explicitly state that “the Commission is not required to inquire into, and may not make recommendations in relation to macro-prudential policy, regulation or oversight”, there seems to be little desire for any practical outcome either.

The terms of reference state that macro-prudential policy “is policy and regulation, including as to the structure, role and purpose of financial regulators, that is concerned with containing systemic risk, which can have widespread implications for the financial system as a whole, beyond simply the banking system”.

Thanks Gravy for your explanation.

Was a bit confused for a minute re your number 6 ... then realised it is number 5:

5. The Commission is not required to inquire into, and may not make recommendations in relation to macro-prudential policy, regulation or oversight.

See what you mean now. Thanks again.

As I wrote in my original post a couple of days ago this single section almost entirely, if not entirely, removes from the Commission's investigation the reason for &  behind the public call for the Royal Commission creation.

Sorry for the mis-numbering of that Term of Reference, but glad you found it :-)

Many of the concerns people have about our banks have only just surfaced since the Keating era. So what happened during Keatings reign, apart from the four pillars policy. Well, let me be frank, Insurance companies were demutualised and allowed to merge with banks in an all finance structure, which was copied from other countries. This change provided the catalyst for our current situation. This is what gave us the Storm business, the gaoling of a union boss, Cominsure's refusal to pay claims etc etc..

Do I agree with a banking Royal Commission? I dont know? Much depends on the terms of reference and what is hoped to be acheived. I do know that we need a strong banking sector which gives people confidence. We certainly dont need a RC just to rip bark off them and confirm what the left side of politics has been preaching to their desciples. If there is an outcome it should be found in a strong recomendation for the banks to offload their non banking business and develope a new culture for the times. Different from the old one and much different from this Keating introduced one.

There are two issues I see as a problem with Malcolm's Commission you have when you're not having a commission.

One thing it doesn't address is that it won't look into the ridiculous fees and Bonuses at all coasts for Senior Management. They do this through a process of focussing on "the share price at all costs " and not on the culture of job cuts; service cuts; and failing to provide reasonable management. This has led to indefensible things like the Credit Card Rates; booming fees and charges; Comminsure and other bank insurance staff automatically rejecting 80% of claims on the basis that less than 40% will appeal.

The second thing is that it will also attack a sector that is being extremely succesful for it's clients. The  Industry Superannuation schemes are making up to double the returns of others in the sector and manage a large part of the sector. Banks have been pushing the Government to give them a significant amount of this sector and to get rid  of employee representatives on the Board. They want their sticky fingers in the pie to reduce the retirement savings of many of today's workers. This is beyond the pale and must be fought on all fronts.

How do you know ? The terms of reference have not been issued .

ROYAL COMMISSION INTO MISCONDUCT IN THE BANKING, SUPERANNUATION AND
FINANCIAL SERVICES INDUSTRY 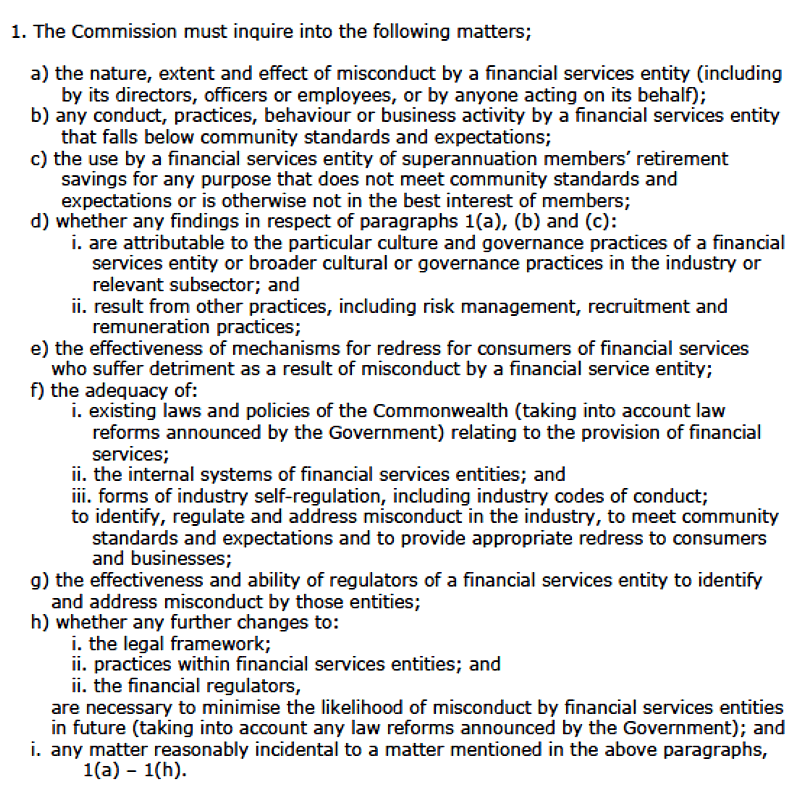 Sorry about the poor reproduction but to paste it all as text would have been overly long IMO. See source link directly above for full details.

financial service entity means an entity (other than a Commonwealth entity or company) that is:

a) an ADI (authorised deposit-taking institution) within the meaning of the Banking Act 1959;

b) an entity that carries on the business of undertaking liability, by way of insurance (including reinsurance), in respect of any loss or damage, including liability to pay damages or compensation, contingent upon the happening of a specified event, including:

i. a general insurer within the meaning of the Insurance Act 1973; and

ii. an entity undertaking life insurance business within the meaning of the Life Insurance Act 1995.

c) a person or entity required by section 911A of the Corporations Act 2001 to hold an Australian financial services licence or who is exempt from the requirement to hold a licence by virtue of being an authorised representative; or

My reading of that is it covers banks, building societies and the like; insurers; financial services advisors/brokers and the superannuation industry.

Hope it includes the rapacious ‘pay-day’ lenders and sometimes dodgy 'debt-consolidators' as well.

This Royal Commission will be very interesting

The powers of a royal commission are heavy. It is like a police investigation and a court combined in one. They can issue search warrants. They can subpoena documents. They can arrest you if you fail to show up. When you do show up, they can compel you to answer questions and put you in jail for six months if you don’t.

And in Australia, you can’t claim the fifth amendment.

I really do t see what the RC will achieve

They get a RC into the whole Financial Indusyty ,

Now they want more to look st the micro policies they set up under Keating that caused the consolidation ,

………But the overwhelming reason for an inquiry rests on just one principle — accountability.

What has been forgotten in the endless round of scandals in recent years is that the Australian banking sector is a taxpayer subsidised industry.

It's an industry that pays ridiculously bloated salaries to its leaders; that showers itself with massive bonus payments when profits are soaring but instantly demands taxpayer protection and support when the tide turns. More on that later.

Blanket yet to be lifted on real estate

It's become apparent in every area of banking, from financial planning, insurance, small business loans and superannuation. But there is one area where the blanket has yet to be truly lifted.

It is on the biggest earnings' driver for our banks — real estate. Consider these sobering facts.

Australian household debt is among the highest in the world

The big four banks hold 80 per cent of all Australian mortgages, worth about $1.4 trillion

So, it's not too big a stretch to question — given their unconscionable behaviour in other areas — whether lending standards over property have been undermined by the insatiable demand for earnings during the property boom of the past five years.

Stories about forged loan documentation, with borrowers urged to inflate incomes, have been rife for years.

No-one, however, knows the true extent of the problem. To a large extent, no-one really wants to know.

Ian Verrender is the ABC's business editor. A journalist for more than 30 years, Verrender spent 25 years at The Sydney Morning Herald in a variety of roles including senior writer and business editor. He joined Business Spectator and Eureka Report in 2012 and joined the ABC in 2014.

We had strong building societies a state bank in every state more smaller banks .

People have been screaming for a RC, now it's happening they're still screaming. Wait and see what happens, before starting to scream even louder. The worst that can happen is that the banks will laugh all the way to the bank and the best is, we will have a better view of why they're laughing.