The Meeting Place > General Discussion > How sure are you?

How sure are you?

The dingo
6 weeks ago

Step in front of a fast moving train and there’s a more than fair chance you’ll not survive to tell the story of why you were dumb enough to step that way.

In fact, if you suggested such I thing to a friend, they’d consider any anticipation  on your part they might survive with some measure of scepticism. And who could blame them?

There seems to be some things we can always rely on: the Sun rising and setting, taxes, death at some point, rising prices, and the applications of Murphy’s Law to name a few.

But there are some things we can’t guarantee. Conception, for example. In spite of the effort we put into achieving fertilisation of ova with sperm and the disproportionate amount of sperm cells the male delivers to the ova, it’s still a bit of hit and miss.

Increasing the chances of a version of a particular event occurring is often sought. In the case of conception the male might gain access more than once, the female might secure the sperm in a number of ways, an appropriate time is chosen for delivery of the semen, or, in the case of reducing the risk, a prophylactic might be used. Among some, a wish, hope or prayer might be employed either way, fertilisation under supervision is now a thing, and, as always the exuberant youths will always keep their fingers crossed instead of their legs.

All this assures us of only one thing: nothing is certain in love and war.

Mathematically, chance can be calculated, sometimes with a great deal of precision, which does seem a contradiction in principles. For example, according to motor vehicle statistics, there is a one in four chance of a motor cyclist between the ages of 18 and 25 of having a significant accident in any one year. The insurance companies and regulators use such figures to make rules and laws in an effort to reduce the probability of a payout or death.

Making a prediction on anything is prone to dispute if not done efficiently. With the kind assistance of Thomas Bayes the task has been made simpler with his rather sobering yet utilitarian Theorem stated thus:

For those who recognise it, they will also be familiar with its importance in all sorts of things including current predictions on climate change and stock market evaluations to name just two. For those who are baffled, fear not. You’ll still lose on the pokies just the same.

In spite of some knowledge on probability and it’s determination there are a number of things that puzzle me about chance and predictions that few will admit to understanding and none have explained to me in a satisfactory manner.

Let’s say there’s a more than fair chance it might rain tomorrow. I dress accordingly, venture out, and return as dry as I left. Not a drop of rain fell. What happened? How wrong could the weather man be, and how inconvenient?

When I was told by the Bureau of Meteorology (BOM) I was assured there would be an 80% chance of rain. The result of the days precipitation was that there was none. What BOM should have said was there would be no rain where I anticipate walking.

Then, in an effort to get it right tomorrow I once again ask BOM to tell me how to dress when I venture out. They suggest, with a great deal of confidence, it will not rain.

Guess what? I get wet within minutes of leaving my door mat.

Thank you for your enquiries on our methods of prediction.

We do not predict weather; we determine probability of events based on current measurement and historical statistical data.

For yesterday’s weather, we determined that there would be a less than 5% chance of rain in your vicinity. We can only determine this probability with a certainty of 40%.

We suggest you prepare yourself for all possibilities during this season as weather forecasting is not 100% accurate, except in retrospect.

So, my question is: Why do we have prediction in the first place? Most circumstances can be reduced to two possibilities: right or wrong, left or right, up or down, in or out, good or bad, plus or minus, yes or no. There are more complex issues with more than two possibilities but the ‘one way or the other’ approach seems to take care of most situations.

As my Old Man would say: “If you make a wrong turn along the way, you’ll surely turn up somewhere and it may well be a better place”.

I flip a coin or role a dice, play eeny-meeny miny-mo, read the cards or tea leaves in order to detach myself from any decision making. I don’t trust my own judgement so I place a great deal of faith in a process assumed more reliable that I could ever be.

Giving away our responsibility amounts to the suggestion that we don’t like to be wrong. We are under a misconception that it is better to place our decision making in someone else’s hands than to make a fool of ourselves. How foolish we might seem when we venture out on a sunny day with an umbrella clearly displayed for all to deride. How humiliating an adolescent might feel when explaining to her indignant parents how she got pregnant.

We might then wonder if once is enough; or never enough.

For most of us ‘fair to meddling’ seems to be adequate and ‘just in case’ takes care of most situations where probability and chance are playing their hand. It might be wise to be prepared for any possibility, although this seems a bit excessive. Betting on every horse in a race will secure you a winner but to what end? After all, there can only be one winner. Unfortunately, the likelihood that your horse will be first past the post is what keeps the thrill in the chase and the money in the bookies bag.

For me, I’ll always take the path of least resistance, expect nothing and be grateful when I am surprised. For any outcome is a bonus, even if it turns out to be nothing at all.

For me, I’ll always take the path of least resistance, expect nothing and be grateful when I am surprised. For any outcome is a bonus, even if it turns out to be nothing at all. 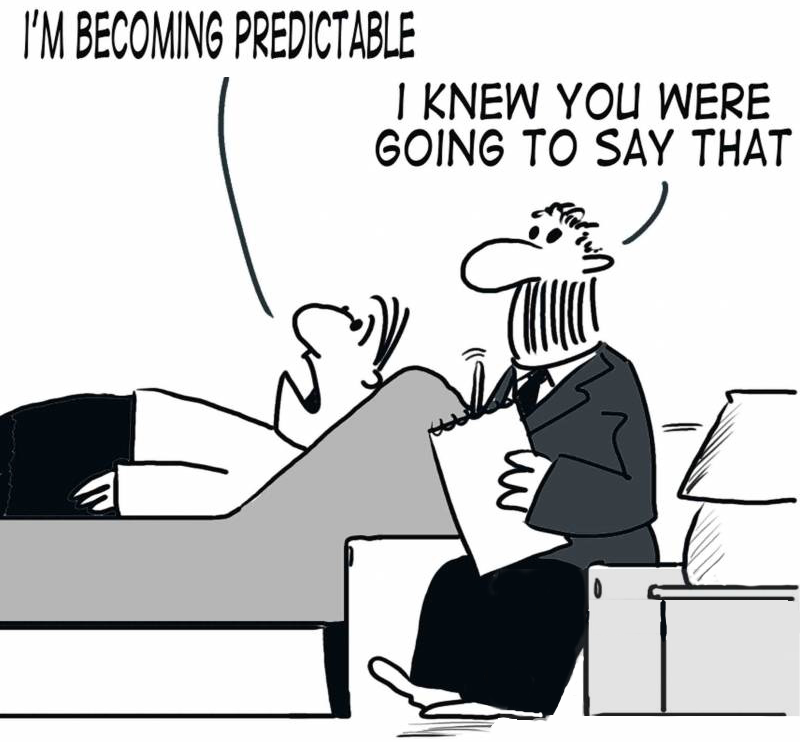 You going somewhere with this Ding? You do know the path of least resistance is lined with the corpses of the mediocre (copied that from the DovBaron) don't ya??

hmm Reag, you're getting a bit deep these days, must be that Hamlet "shindig" you're going to in the Park!

Don't get me wrong ABE, I am reasonably familiar with the Bard even had a small part in Hamlet once. I played the skull, didn't have much to say which was ok, but I did have the best seat in the house mate, beat that if you can!

Can’t  beat that mate, had no idea you were so talented Yorick. Acceptez vous my apologies. Sooo in actual fact you took the path of least resistance – accepting a crock part so you could get a good seat in the house, hmm and more hmm! Remember Yorick, ‘Brevity is the soul of wit’  g’nite.