A catastrophic fire has engulfed and partially destroyed the majestic Notre Dame cathedral in Paris. But within hours of the blaze being contained, a French billionaire promised 100 million euros to help with its restoration.

The fire began in the early evening and burst through the roof of the centuries-old cathedral and engulfed the spire, which collapsed, quickly followed by the entire roof.

The cathedral's famous spire collapsed, but a French official and the Paris fire chief said they believed the iconic towers had been saved and that the cathedral's structure was "saved from total destruction". However, two-thirds of Notre Dame's roofing "has been ravaged".

The fire is, so far, being treated as an accident.

Fire chief Jean-Claude Gallet said a major accomplishment of hundreds of firefighters was stopping the flames from spreading to the north tower belfry.

One firefighter had been seriously injured in the blaze.

French billionaire François-Henri Pinault said he and his family would donate money to help reconstruct the cathedral.

"My father [François Pinault] and I have decided to release as of now from the funds of Artemis a sum of 100 million euros to participate in the effort that will be necessary for the complete reconstruction of Notre Dame," Mr Pinault said.

Notre Dame was bulit in the 12th and 13th centuries, taking 200 years to build. It is the most famous Gothic cathedral of the Middle Ages and is an integral part of france's identity.

The cathedral is renowned for its architecture, especially for its many gargoyles and its iconic flying buttresses. It is also home to countless celebrated artworks, including its three stained-glass rose windows and a Catholic relic, the crown of thorns, which is usually displayed on Fridays during Lent.

Luckily, the cathedral's significant collection of artwork and holy objects had been recovered, said Paris Mayor Anne Hildago, and residents were evacuated.

French President Emmanuel Macron has pledged to rebuild the cathedral, but said he would need international help to do so.

"Like all our compatriots, I am sad this evening to see this part of all of us burn," said Mr Macron.

So Tragic. The beautiful church took hundreds of years to build, and wooden support beams that were installed in the cathedral during the 1200s are still there today.

Unlike the stone towers at the front of the building, those wooden frames inside make the church vulnerable to fire.

To say I feel sad is an understatement.

Millions around the world feel the same Sophie. It was one of the highlights of our tour especially on our honeymoon. Wonderful to see promises for money for rebuilding coming from so many sources, even Australia. Very proud of our government and opposition. One billionaire has already pledged $113m.

Not unusual for smoldering to be started by the application of heat, welding torches or heat guns (eg for glue/paint removal) and to break into flames hours later. 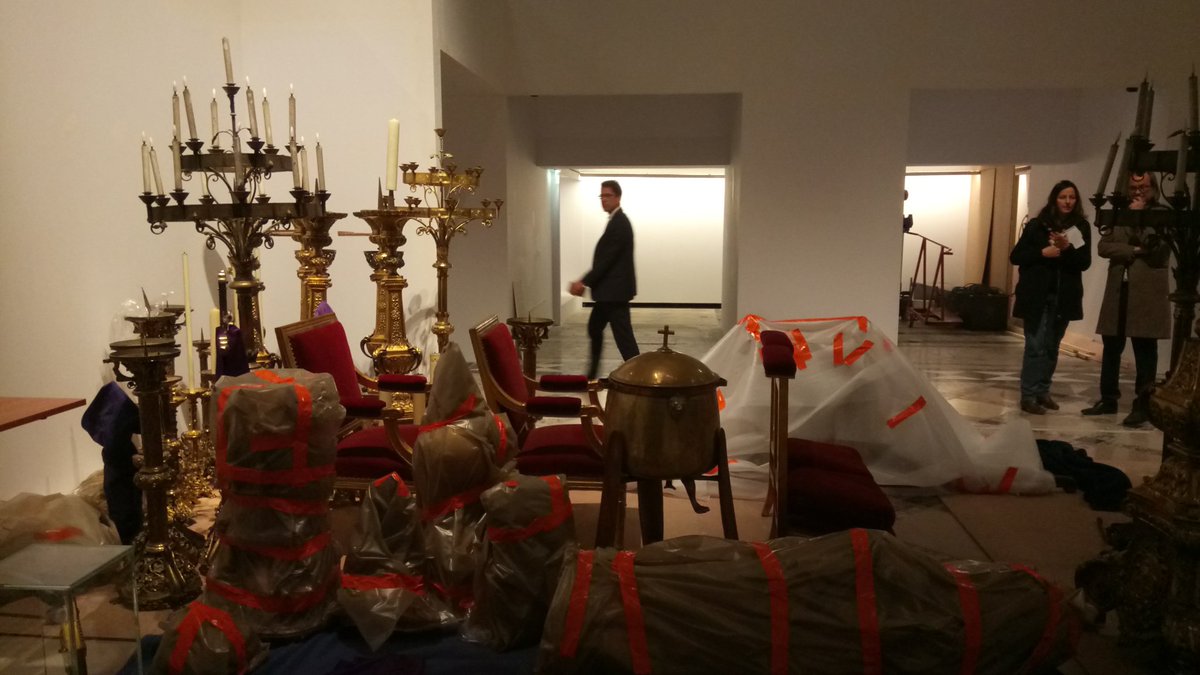 Mayor Anne Hidalgo thanked the city’s first responders in a tweet, revealing they had formed a “formidable human chain to save the works” of Notre-Dame.

“The Crown of Thorns, the tunic of Saint Louis and several other major works are now in a safe place,” Ms Hidalgo wrote in a translated tweet.

That's at least some good news. Thanks Toot.

I studied in Paris for two years and each day I walked past Notre Dame. Couldn't resist on most days to step inside and say a prayer. I am so very sad.

Inside Notre Dame before the fire..

Visited Paris in 1979 & viewed Notre Dame. So sad to see this disastrous fire ravage this icon.

So sad to see this disastrous fire ravage this icon.

Buildings don't just catch alight.  There is some failure of due care that is responsible for this.  Waiting for the responsibility to be rolled downhill to the most junior employee.

Just thinking, was there much left of it after WW1?  Then along came WW2 bombs.  Not saying it isn't a very sad loss though.

I say no, it is adequate that we communicate our commiserations and hope for future successful restoration. Honestly, haven't we already paid in enough blood and lives for sad events in Europe and taken so many displaced people too.  Maybe allow the Euro union to take care of one another through mutual cooperation this time.

If individuals want to donate so be it.

Re Paris in the world wars.

The British General Staff urged the French to defend Paris street-by-street, but deputy prime minister Pétain dismissed the idea: "To make Paris into a city of ruins will not affect the issue." On June 12, the French government, in Tours, declared Paris to be an open city, that there would be no resistance. The Germans occupied the city on 14 June 1940.

Shortly before the Liberation of Paris, Hitler ordered explosives to be placed around important landmarks, such as the Eiffel Tower, and key transportation hubs. If the Allies came near the city, the military governor, Dietrich von Choltitz was to detonate these bombs, leaving Paris "lying in complete debris." Von Choltitz, however, did not carry out the order and surrendered to the Allies.

Paris in World War I.

Do you think that the federal politicians on the campaign trail should be making any promises to donate Australian taxpayers' money to the rebuild?

I think they should leave it until after the election and donate on a per capita basis as compared to other nations contributions. I am in favour of a national donation.

We have so many ties to France due to the wars.

A guide to Australian memorials on the Western Front

I presume there will again be many Australians in France this year on Anzac Day.

My extended family have paid enough already, too much, to Europe.

BTW, Newsweek has a story about ongoing vandalism to churches in France[click for link].  I am hoping that this dreadful destruction has a simpler explanation, possibly human error.

Thanks to you and others so far for a civil exchange of opinions.

Just to add to the above post, it is now being reported that serial headline seeker Malcolm Turnbull has declared that the Australian government should be setting up a fund to pay for the restoration of the Notre Dame cathedral.

Now for the Oz meeja (sic) to put pressure on Morrison for a bidding war to spend taxpayers' dosh.

Nope, it was Bill Shorten who has demanded that 'Mr Morrison' also promise to send Aussie taxpayers' money to France to rebuild Notre Dame.

Bill Shorten is more than a match for anyone where outbidding and spending the Aussie taxpayers' hard-won (but easily lost to the ATO) tax dollars is concerned.

If Mr Turnbull wishes to make a donation to the Notre Dame restoration fund then fair enough. If any individual wishes to do likewise, then good on them. But it is not for Australia's government or wanna be government to pledge our money to do so.

It is a sad situation but not a national disaster like a tsunami or earthquake.

I wonder if the obscenely wealthy Catholic Church will donate some of its $billions to restore its own building? I also wonder if France and or other countries would help us to rebuild the Opera House if it burned down?

Agree with you KSS. Happy for our government to donate taxpayer funds to help people suffering from a disaster but not to fix a building.

The Pinault family will unblock one hundred million euros through its investment company Artemis, after the terrible fire that ravaged the Notre-Dame Cathedral, said Francois-Henri Pinault tonight.

"This tragedy strikes all the French and beyond all those who are attached to spiritual values. Faced with such a tragedy, everyone wants to revive this jewel of our heritage as quickly as possible, "writes the president of the family holding company and the luxury group Kering.

I am very sad to see this fire.

I went to Mass in Notre Dame when I lived in Paris as a child and visited the cathedral many times.

Still have photos, somewhere, of the passages and gargoyles and myself and some of my family crossing the stone corridors and terraces on the outside of the building.

It is indeed a terrible happening to such a treasure of human civilization and I hope it was not intentionally caused as many of today's disasters are, because it would be a crime against human history and humanity itself.

I hope the damage can be fixed in some measure, although the wooden structures can never be replaced to look as they were and also hope the crystallines are not shattered. The spires falling made me cry today.

Notre Dame Cathedral is not only a place of spiritual value for Christians, but also a monument of human art and culture for the whole world.

Buildings as treasured and old as Notre Dame belong to the whole world in a sense. Millions have enjoyed the architecture and my wife was in tears today.

A real shame for this UNESCO World Heritage building. Hopefully some billionaires around the world will dig deep and restore it.

All the thoughts so far on this list I share. It is reasonable that repair of buildlngs be funded by their owners or owning populations. This is one of those rare buildings where value is outstanding and irreplaceable; the cost of repair enormous. In this light, support from around the world, spreading and lightening the load and with its capability to do the job well and as fast as likely seems good to me.

You can only put a certain number of trades on a site at the one time.  I like the French President's call to the worlds best to come forward and presumably be paid properly for their skills and rewarded with personal recognition for helping.

The cost is well within the capability of the RC church and certainly easily met by a modern State like France.

What I very much dislike is cynical politicians leaping forward to make personal political capital out of a calamity.  Especially where Shorten, for example, is grandstanding, already having assumed the throne (so to speak) before the election and is volunteering some his hundreds of billions of cash grab from taxpayers to do it.  There is a difference between extending heartfelt sympathy and offering hope (which he should have done instead) and puffing out the chest and trying to out-bid whoever comes next in his unseemly haste to become PM.

The Vatican and France need Bill Shorten's hand-out (after raiding the Aussie taxpayers' wallets) as much as Prince Philip needed that gong (Order of Australia) from Tony Abbott.