What you're doing wrong with sparkling wine

Champagne guru Chris Sheehy has put a cork in the myth that a spoon in the neck of a champagne (or sparkling wine) bottle keeps it fresh.

“The theory is that you put a cold spoon into the neck and that makes the air around the spoon colder, so more dense. Because it’s denser, the bubbles won’t escape past it, so it’s almost like an air blanket that sits on top of the bottle so that the CO 2 stays inside the bottle.”

“We’ve looked at different ways and methods to keep champagne fresh and the old spoon in the bottle trick always comes up the same as if you just leave the bottle in the fridge with nothing in it at all,” he said.

So, how do you keep your leftover champagne fresh?

“If you do have some left, the most important thing is the temperature,” Mr Sheehy told news.com.au. “You should never let the bottle warm up and then chill it down again. If you can keep it cold at all times, that will hold the bubbles/carbon dioxide in the liquid.

“The next factor would be how much Mumm champagne is left in the bottle,” he continued. “If you’ve only had one glass from the bottle then there’s not much oxygen within the bottle itself, so it will tend to last longer. But if you’ve only got a small amount left, like one glass in the bottle, it will have been losing its fizz far quicker no matter what you do.

“The rule of thumb for me is if you’ve got one glass left in the bottle then don’t even try and save it, just enjoy it.

“The next factor is the closure system,” Mr Sheehy said. “If you do have a champagne stopper, they’re relatively easy to find and pretty cheap, keep the bottle nice and cold the whole way through and put the stopper in if you’ve got at least half a bottle or more left and get it back in the fridge.”

He went on to say that if you keep the bottle cold, have more than half the bottle left and use a stopper, the champagne should stay fresh for another 24 hours, but less than half a bottle will deteriorate after just four or five hours in the fridge.

Champagne on the pension?  I don't think so.  Only for the likes of Liberal cabinet members to celebrate shafting us lesser mortals.

Champagne is French sparkling wine from that region.

However, many Australians do drink sparkling wine, mostly Australian, as much of it is very good.

LOL...where I live every Wednesday is happy hour and I can assure you there is plenty of sparkling wine consumed by pensioners/retirees.  There are lots of good quality wine available at a good price.  You cannot call it champagne here it has to be called sparkling wine.

Have a good happy hour on Wednesday 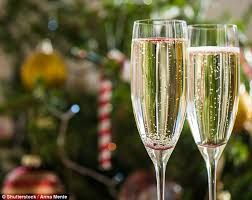 Well..in my view, one rarely uncorks a bottle of champers if you're on your own.

So, if there are at least two people around, ditch the cork and spoon and finish the bottle!

Yes, Sophie, a cork is there to stop the contents spilling when being transported. A cork has no further use once a bottle is opened and can be assigned to the rubbish bin. Good Health!

Bonne santé to you too Horace!

Now, this is an interesting topic about keeping carbonated drinks fresh by placing something over the neck and it was common when I was growing up to see card players placing a matchstick across the neck of a beer bottle to keep the "head".

I thought it was a myth and nothing was achieved by doing that and, further, there was no scientific basis for the action. Fast forward to my early working life when there was a job involving explosives. Items to be destroyed were placed in a posthole dug specifically for the job, together with an explosive charge which was detonated from a safe distance.

There was a discussion about the matchstick on the beer bottle and whether it worked. The senior person assured me that it did and he could prove it. He said that the posthole after some detonations was shaped like a bottle with the upper half being untouched and the bottom half being forced outwards by the explosions. He got me to place a length of 4X2 over the hole immediately after the next detonation and the smoke and fumes coming out of the hole were altered by this action. The smoke and fumes rose slightly above the wood and turned downwards to go back into the posthole. I was converted.

H-C   Agreed!  The matchstick 'trick' works.  My father introduced me to use a match after opening a bottle of beer - pre stubbies.  I employ the same technique during happy-hour with travelling caravanners.  It is novel and fuels debate and it works - however contents never last long enough to test the longevity of its effectiveness.

I am really pleased to tell you that you can get a really good French Champagne at Aldi's for $7.99, so if you like the bubbly stuff, treat yourselves folks.  Cheers!

Now if you're a Sangria fan, as I am, at that price, you can afford to spice things up a little!

Thanks for the tip Maggie!

Your article makes me more experienced and impressed, I hope you will have more good posts in the near future to share with readers. atari breakout