An Australian woman is lucky to be alive after being stabbed in the neck during the London terror attack on the weekend.

Brisbane woman Candice Hedge was reportedly sharing a meal with her boyfriend before a London Bridge attacker attempted to cut her throat Saturday night UK time.

British police have arrested 12 people in east London in connection with the terror attack that left seven people dead and 48 injured, including up to three Australians.

Islamic State has claimed responsibility for the attack.

Ms Hedge, 30, was reportedly stabbed in the neck with a 30cm knife.

A witness to her attack said one of the terrorists cut her throat while she was trying to hide under a table.

“The girl was bleeding massively, but she was conscious … there was a lot of blood, and it was clear on the neck, which was scary,” he told Channel Nine.

Ms Hedge let her friends and family know that she was alive and well through social media.

“Hey everyone, just so you know I’m doing ok. Bit of pain but I will survive. Thanks for your thoughts and well wishes. Love to all,” Ms Hedge said in a Facebook post.

A second Australian victim was reportedly Andrew Morrison from Darwin.

In a video posted on Reddit, Mr Morrison with a blood-stained cloth wrapped around his neck, said he was stabbed after leaving Belushi’s bar in London Bridge.

“All of a sudden this guy comes up with a knife… I push him off. I walk into a pub and say ‘Someone help me, I’ve been stabbed’,” he said on the video.

Read more at The New Daily

Welcome to the new world of political correctness whilst ignoring the plain blinking obvious and being labelled something derogatory if one should dare raise concern.

110 Muslims and hundreds were injured in Afghanistan only last week by the same terrorists who target the West. By blaming Muslims the terrorists win again as they want to divide us with hate. London's mayor is a Muslim and he feels the same way about terrorists as a catholic or aN aetheist.

It is counterproductive to spread hate and fear because it compounds the problem.

So that makes it OK then GrandmaKathleen22, the fact that London lost fewer to Muslim terrorists than Afghanistan? I don't think so.

Whilst such a thing as freedom of speech exists....

Islam and Muslims. There!

It seems to me GrandmaKathleen22 that the three attackers were doing a very good job of spreading hate and fear.

I have read the Quran, the commentaries on it known as Hadith, and the Al bukhari (life of Mohammed). I am astonished they are not all banned for being the hate literature they truly are. The Quran has over 110 passages that say things like this quote: "When you encounter an infidel, cut of his head and fingertips; spread the will of Allah". Moreover, the Al bukhari describes how 'The Prophet' (of Doom) personally beheaded 100 Jews in the Banu Quraysh region of what is now Saudi Arabia - all because they didn't agree with 'The Prophet'. And Muslims wish to emulate this mass-murdering, kidnapping rapist and paedophile (he had sex with his wife Aisha when she was 9!). Those committing atrocities are not extremists at all, but are simply following the example of Mohammed and obeying their 'sacred' texts.

The sooner Australia bans all immigration, starting with Muslims, and begins to deport Muslims, the better off we'll be. If they cannot be deported, then send them to Australia's Antarctic territories. Let them eat halal penguin. It would be a great encouragement for them to leave.

Done a lotta reading mate. Have you come across the Christian Crusaders who killed millions of Muslims and Jews?

How about the Aztec religion, they used to kill their own babies.

The difference reagan is that we no longer subscribe to the ethics of the Crusaders or the Aztecs. Unfortunately Islam has not moved on from its bloodthirsty roots.

When will it occur to those "in charge" that this is our world now.  If, as Jackyd commented, anyone dares to say what's REALLY going on, one is denigrated and called a RACIST!  I AM NOT A RACIST.  I see this situation as it really is.  There are people our there who would have the world converted to their beliefs, by any means possible.  Until we recogise this and deal with them effectively, these horrific attacks will continue.  It is so sad to see our world ruled by people who's main criteria is "What's in it for me".

Islam is not a race. Some say its not even a religion. Irrespective, you can only be a racist if you denigrate or make derogatory comments about a race. Criticizing a religion is therefore not racist. Speak up and express your opinions even if includes the obvious.

Islam is not a race - true

Christianity is not a race - true

Judaism is not a race - true

They are all ethnic groups - true

Compare the 8 minutes it took the London Police to respond to and shoot dead the three terrorists and the 90 minutes it took Victorian police to decide to enter the plane under threat from an 'assumed' terrorist disabled by passengers under the very real fear that the plane could be blown up at any minute.

Who would you prefer on your side? I know who I'd choose.

You'd think that after the Lindt seige, an enquiry 2.5 years later which stated the bleeding obvious, the authorities would have learnt something.

We are seeing the rise of the Dangerously Deluded, both in politics and outside.

Refusing to acknowledge real problems, all inclusive statements don't help, but there are identifiable problems that are being ignored.

A statistical analysis of past atrocities would show the facts, and then give politicians the info required to better counter these threats.

We can only guess the size of the pollies too hard basket.

It matters not where, or who.

One death or injury is always one too many. By the way who's counting?

And excuse me, what has the London mayor being a muslim got to do with anything.

I understand that the Pope is a catholic.

These insane atrocious have to be stopped, and by any means available. Enough already!!

I spelt atrocities (atrocity) wrong. OMG but hopefully you know what I mean :)

KSS I never said that, you did. The point I was making is obvious. Muslims are killed by terrorists as well. If it is every Muslim who is a terrorist as some are suggesting then why are more Muslims killed at their hands than westerners? Demented evil doers are hurting anyone. They do not discriminate.

Did they stop to ask anyone if they were a Muslim then spare them? No, they did not!

in Philliphines and Pakistan and Egypt

I'm sorry to say GrandmaK but the problem is with Islam, particularly those and with most Muslims that fail to condemn the hate of the Islamic texts, the very same texts that the extremist follow so vehemently.

There are no excuses now, no reason for a soft touch, only to stand our ground and protect our own way of life in the face of such a destructive diversity.

A short speech from Winston Churchill, delivered by him in 1899 when he was a young soldier.

How dreadful are the curses which Mohammedanism lays on its votaries! Besides the fanatical frenzy, which is as dangerous in a man as hydrophobia in a dog, there is this fearful fatalistic apathy. The effects are apparent in many countries, improvident habits, slovenly systems of agriculture, sluggish methods of commerce, and insecurity of property exist wherever the followers of the Prophet rule or live.

A degraded sensualism deprives this life of its grace and refinement, the next of its dignity and sanctity. The fact that in Mohammedan law every woman must belong to some man as his absolute property, either as a child, a wife, or a concubine, must delay the final extinction of slavery until the faith of Islam has ceased to be a great power among men.

Individual Muslims may show splendid qualities, but the influence of the religion paralyses the social development of those who follow it. No stronger retrograde force exists in the world. Far from being moribund, Mohammedanism is a militant and proselytizing faith. It has already spread throughout Central Africa, raising fearless warriors at every step; and were it not that Christianity is sheltered in the strong arms of science, the science against which it had vainly struggled, the civilization of modern Europe might fall, as fell the civilization of ancient Rome.

Brilliant analysis from a great mind

So true even to this day - in fact they've regressed further

In 1937 Churchill told the Palestine Royal Commission this..…

Now here’s where it gets interesting..Churchill so admired Muslims that his family feared at one point he might convert to Islam..he was fascinated with the culture and took to dressing up in Arab clothes in private..

This revelation came to light when a letter to Churchill from Lady Gwendoline Bertie in 1907 which pleaded with him to curb his enthusiasm..he was so fascinated with Islam that together with his close friend Wilfrid Blunt the poet and radical supporter of Islam.. Churchill supported many Muslim causes..

He regarded Islam and Christianity as equals so much that in October 1940 he approved plans to build a mosque in central London and set a aside over 100,000 pounds for the project..the mosque is still there and known as the London Central Mosque..

So who is the real Churchill? Even I.. although born British..I am beginning to wonder... Thea, I like your style. You are well educated and a voice of reason amongst so many biased utterings.

I look forward to reading more from you.

Thank you for your very kind words GrandmaKathleen22..much appreciated..

Thea -  It makes you wonder who the real Churchill was. I was disgusted with what I read about him. Thanks goodness he is not alive today because he would be supporting the Muslims still. I think too much Whiskey had seeped into the brain. I must tell my Sister, as she thought the sun shone out of you know where..

A man was killed and several police were injured yesterday before officers shot dead the gunman in Brighton, a suburb of Melbourne.

The gunman, 29-year-old Yacqub Khayre from Roxburgh Park in Melbourne's north had previously been charged over plans to attack Sydney's Holsworthy Army base. He had a long criminal history and was recently released from prison on parole.

Malcolm Turnbull demands to know why gunman was on parole.

With people being incapable of understanding that Muslims are not terrorists, the word Islam needs to be removed from these terrorist organisations who believe in nothing apart from murder and mayhem.

Muslims do not take drugs or steal so when that is present they are not Muslims.

There will be more harm done by people following the likes of Pauline Hanson who espouse ignorance and hatred.

Agree that all Muslims are not terrorists GrandmaKathleen22 and many are appalled at recent events.

However, when many of these jihadi fanatics themselves invoke Allah, when extremist groups like ISIS make claims that the perpetrators are 'warriors' for the cause of Allah in certain cases

... it's very hard for non-Muslims to separate the two.

As for Pauline Hanson, she's awful as well after she used the London Bridge attack and the MET's warning message to further her political viewpoint/clout very shortly after news of the the event. 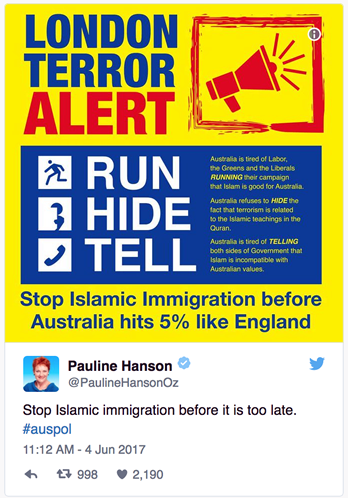 So much posturing and 'we'll get you' from both sides.

However IMO nothing excuses radical followers of Islam (or others) for terrorist atrocities ... absolutely nothing.