On a sunny autumn weekend, a group of 11 friends headed up the Hume Highway for a fabulous food and wine experience in Rutherglen, one of Victoria’s great wine regions, about three and a half hours drive north-east of Melbourne.

The highlight was a Seasonal Food Foray – a long, progressive, gourmet picnic lunch at four, award-winning wineries in the Wahgunyah and Rutherglen areas: Cofield, Pfeiffer, Stanton & and Killeen, and Buller. The Pickled Sisters Café at Cofield Wines prepared the four, entrée-sized, seasonally-inspired meals. They were presented in a stainless steel Tiffin box – a series of stacked containers (per couple), together with a zip-up shoulder bag for transport. Each dish is matched to a glass of wine at the wineries, and at $70 per person this is truly value for money.

We are staying at an inexpensive motel in Corowa, a good deal at $210 for three nights for two, including a basic cooked or continental breakfast delivered to your door each morning. There is a multitude of motels to choose from in Corowa and Rutherglen, which I suggest would be doing it hard during the off-season periods. There didn’t seem to be too many tourists around on the weekend we were there.

Half of the group is into golf and spends a relaxing Friday at the 27-hole Corowa Golf Course. We get to play the back nine on the old course, which has huge River Red gums throughout the picturesque layout, running alongside the mighty Murray River. At the end of the round we head to the bar for refreshments and are put off by the smokers outside. They are feeding the undercover pokies and the machines’ noise completely negates the relaxed feeling we had out on the course. The other half of the group is content to visit the nearby Whiskey and Chocolate Factory, a converted flour mill just outside of Corowa.

They move on to All Saints Estate, just a couple of kilometres from the Chocolate Factory. What better way is there, than to spend time on a sunny afternoon next to the pond, with the ducks, a platter of cheese and bickies, and your favourite glass of wine.

It’s Friday night and a Neil Diamond Superhits night, with award-winner Steve Cummins and his band performing at the local RSL club. There is a seafood buffet for $30 each (cheaper for members), which most of us take up. If you like seafood this is awesome value – mind you it’s nowhere near gourmet cuisine, but there’s plenty of it. One of our group had about three dozen oysters and he wasn’t even sick the next day. The wine is relatively cheap and the entertainment is free.

We sit through the entertainment in the auditorium as the band performs most of Diamond’s hits. I am not really a fan of the singer, but Steve and his band do a great job and sound very much like the real thing. He has the small audience clapping and singing along “Sweet Car-o-line, oh, oh, oh …”. But there is the occasional table whose occupants are not interested and talk above the music to make themselves heard. Not put off by the chatter, Steve smiles and joins selected groups in the audience (including some girls celebrating a hen’s night and wearing large, pink cowboy hats), for trivial banter and up close flirtations. He is the complete pub performer.

The band is staying at our cheap motel and they chat outside their rooms until five in the morning. The noise carries in the thin cold air and we wake occasionally to the sounds of loud talk and laughter. The band members are surprisingly up at 9am, outside for their first cigarette, then off in their old Ford station wagon at 10am to set up for their next gig in Cobram. I reckon this would be a really hard way to make a living. 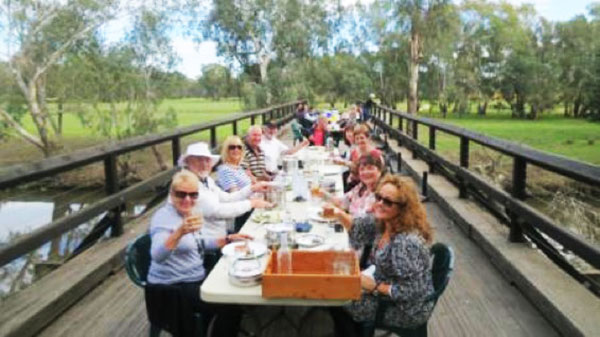 The Corowa taxis – a seven-seater and a standard car – pick us up and drive us to Cofield Wines for our first Food Foray sitting. We ‘prime’ ourselves with a pre-course tasting. The speciality here is the Sparkling Pinot Noir Chardonnay, which is the selected wine for the Salmon gravlax with pickled, baby beetroot and ruby grapefruit. Our tastebuds are whetted for what is to come. Other groups arrive on bikes – the alternative way to experience the Food Foray. Although if they were breathalysed by the end of the day, some might be in trouble.

The taxis return and we are off to Pfeiffer Wines, not far from Cofield. There is a breathalyser here and after tasting, the girls blow huge numbers. Luckily, we have the taxis at our disposal. This venue is superb. During summer, there is a Farmer’s market on the weekends. The tables are set up on the 100-year-old Sunday Creek bridge, just below the winery. The creek is a branch of the nearby Murray. This is a perfect setting – low 20s temperature and autumn sun, spectacular scenery, beautiful food and wine, all shared with friends. It doesn’t get much better than this. The food is chicken and pistachio terrine with peach chutney – washed down with Pfeiffer’s Marsanne. We soak up the moment and order more wine, spending a couple of hours here. We are getting right into the swing of things. There is much laughter and the conversations are becoming louder.

The next stop is Stanton & Killeen, where we savour the fillet of beef with salse verde and vegetables, and a glass of Shiraz Durif to accompany the food. This would be the least favoured venue – the table was setup inside rather than the preferred outside setting under a large hanging willow tree. The reason given was that they didn’t know what the weather would be like, even though the prediction was sunny and 21°C. Too hard to organise and short-staffed might be other reasons.

Campbells Wines is a short walk away, which gave us time to reflect on our experience so far – absolutely wonderful, but there is more to come. The sun is setting over the vineyard and shining through the trees adorned with brilliant coloured autumn leaves. We are seated outside taking in this spectacular scene and eating our final course, orange and almond cake with Gundowring vanilla bean ice cream. Then there is the dessert wine, a liberal serving of Campbells Topaque (formerly Tokay, but changed for legal reasons).

It is getting cooler now, some six hours after starting at Cofield. The taxis arrive one last time to take us back to our motel. Everyone is singing the praises of this wonderful experience, now etched for good in our memories.

I take a moment to think about the scenario of doing the same thing exactly a week later – with an Antarctic blast sweeping over Australia’s south-east, producing the lowest temperatures this year. I feel sure that I would have had a completely different take on the experience. I guess the message is to take everything as it comes and make every effort to enjoy life to the full.

All prices, options and activities correct at the time of writing.

Max and Jenny Williams make their way around the Golden Triangle

Max and Jenny Williams take a tour of northern India.

Just cruisin’ & laughin’ on a ship of comics

Did Airbnb in France work for Max and Jenny?