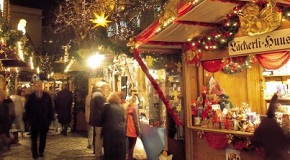 Marking a landmark year of innovation and expansion, Viking River Cruises, the world’s leading river cruise line, has proudly announced the addition of two more Longships to its fleet in 2013. In keeping with tradition, the Viking Baldur and Viking Magni, have been named after Norse Gods.  The new additions bring the tally to 10 new Longships in one year, with a grand total of 34 ships on the majestic rivers of Europe, Russia and China – making Viking River Cruises the youngest and largest river cruise fleet in the world. Thus, in 2013 expect to see the following Viking Longships on the waterways of Europe: Viking Aegir/Viking Idun/Viking Odin/Viking Freya/Viking Embla/Viking Atla/Viking Forseti/Viking Njord/Viking Magni/Viking Baldur.

For even greater convenience and savings,  Viking has created a Holiday Season Air offer. Book a Christmas Cruise in 2013 and fly to Europe return for just $1,795pp. Fare includes all taxes and surcharges.