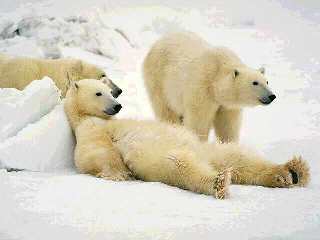 There are many reasons to explore the Great White North, but the best is surely the magnificent and beautiful wildlife which is native to Canada. A true representation of this beauty and a sight not to be missed is the Manitoba polar bear.

Manitoba polar bears can stand up to 10 feet tall and weight over 900 kgs. The polar bear, whilst closely related to the brown bear, has evolved to occupy a very narrow ecological niche. It has adapted its body characteristics to survive in very cold temperatures, moving across ice, snow and freezing water and for hunting seals, which make up a majority of its carnivorous diet. The polar bear is listed as a ‘vulnerable species’, and now that unrestricted hunting has been banned, global warming remains the greatest threat to their existence.

Many tours in the Manitoba province of Canada give you the opportunity to track a polar bear across the frozen tundra, explore the history of the fur trade, or just watch these magnificent creatures blending in with their surroundings or making new friends. Tourists can get close to the polar bears by travelling in specially designed ‘tundra buggies’, which travel across the ice and protect tourists from the animals. The best time to travel if you wish to see the polar bears in their natural habitat is between October and early November.