Along with most of southern Spain, Seville simply sizzles during the summer months. So now that the northern hemisphere is heading into autumn, it’s the perfect time to explore this Spanish gem.

Seville, while famous for its oranges, is often overlooked by tourists who favour the more glamorous Spanish cities of Barcelona and Madrid, so that’s just another good reason to take some time to explore the relatively ‘empty’ streets.

Situated in the Andalusian region, Seville is the name of the city, as well as the province in which it’s located. Doused all year round in sunshine, the temperatures are a little unbearable in the summer, even for hardened sun worshipers. As with many other European cities, the humidity can make it unpleasant, so visiting when temperatures are cooler and the air lighter is definitely preferable. February and March offer temperatures which are pleasant, if a little cold at night and although it may rain during these months, it won’t be enough to stop you from enjoying yourself.

Another advantage that Seville has over other cities is its relatively low population, just over 700,000, so even when tourists descend, it never really feels crowded. The strong Moorish influences and history as a bustling port have influenced the food, culture and architecture. And while the birthplace of flamenco is a hotly debated topic, Seville boasts some of the best examples, with no black lace headgear in sight!

Seville offers an incredibly pleasant destination to pass a few days or even a couple of weeks, such is the enjoyable pace of life and the exciting buzz of this small city. But to help you get started, here are our suggestions for where to eat, stay and with what to fall in love.

Tapas, tapas and a little more tapas! People immediately associate Spain with tapas and while the tradition still exists in many cities, it’s often a somewhat disappointing, and expensive, experience. Seville has kept alive the true essence of tapas, little inexpensive (its difficult to find free tapas now) plates of nibbles as the perfect accompaniment to a local sherry or wine. It’s the tradition to work your way along the streets, sampling as you go, before eating your evening meal at a ridiculously late hour. But when in Spain…! Don’t be put off by the legs of ham and other delicacies hanging from pub rafters, these are the best places to eat and with over 4000 to choose from, you won’t go hungry. A drink and a small plate should cost you no more than $3 or $4, and remember, it’s cheaper to eat at the bar than at a table or outside on the terrace.

Centre your tapas trip around Barrio Santa Cruz, but keep in mind that tapas is all about walking, eating and drinking, so don’t be afraid to wander as you wish.

Being a small city, accommodation in Seville can come at a premium and is certainly more expensive than other Spanish cities. If you fancy a little of the luxury enjoyed by royalty and film stars, then Hotel Alfonso XIII is where to head. Strong Moorish influences make this five-star hotel feel cosy and unobtrusive, but be prepared to pay around $350-$400 per night.

If this is a little too rich for your budget, there are a few cheap and cheerful options, such as the Pension Vegara, where the rooms will only set you back about $20 per night, but a good, mid-range option is Hotel Simón. Situated in the heart of the Old Town, this 18th century mansion has simple, but comfortable rooms and the decorative tiles which adorn the building are their own works of art. A stay here will cost between $50 and $100 per night, depending on the season, but its close proximity to everything makes it the ideal choice. 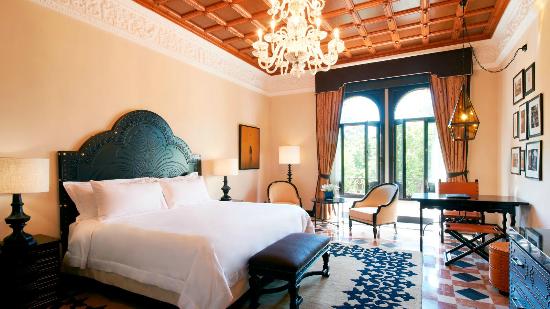 Hotel Simón (this site is in Spanish, but useful for images, you may prefer to book via a site such as Booking.com)

Even though some of the buildings are truly impressive, there’s no endless list of must-sees in Seville, so you don’t need to feel guilty about taking a more relaxed approach to sight-seeing. And this is definitely the thing you’ll love most about Seville. Late nights are the norm here, so not having to get up early to make the most of the day will definitely be appreciated. And should you travel in the summer, a siesta will definitely be required, as the whole city tries to escape the sun during the afternoon.

Spend your days wandering along the banks of the Guadalquivir River, taking time to enjoy the Real Alcázar, a beautiful palace in Moorish style and the Cathedral of Seville, which was once the third largest church in the world.

But, for a truly spectacular view of the city, head to the outdoor bar on top of Hotel Doña Maria with a view of the Cathedral and all the lights. The lights go out at 11pm and it can be busy, so make sure you get there early to secure a table. As one of the more expensive hotels in Seville, you may not be able to afford to stay there, but one drink won’t hurt your budget too much.