Brian is a nervous flyer and, since the events at the turn of the century, has developed a bit of a post 9/11 flying phobia. In today’s Travel SOS, Leon hopes to set his mind at ease.

Q: Brian
Ever since September 11, I have been afraid of flying. It’s prevented me from travelling any further than my car will take me. My family has been helping me to build up the courage to go on a domestic flight from Melbourne to Queensland, and I’m just wondering how safe I’ll be. Does Australia have the equivalent of US air marshals?

A: Brian, while it would be highly unlikely that a terrorist would strike a plane from Melbourne to Queensland, you should know that it’s not uncommon to fear such attacks. The thought has even crossed my mind once or twice, although only when I was in the US.

The September 11 attacks prompted airports worldwide to increase their security both on planes and in airports. As early as December 2001, a program operating under the Australian Federal Police (AFP) was instigated so, yes, we do have the equivalent of US air marshals.

Our guys are called Air Security Officers (ASOs), although they are commonly referred to as ‘sky marshals’.

ASOs are armed, trained and equipped to handle a variety of situations in the air and on the ground, such as containment or resolution of high-risk security incidents on domestic and international flights. But they’re not only on the lookout for terrorists. In Australia, they may be more likely to focus on random criminals and people of interest.

You won’t even know an ASO is on board, as they blend in with other passengers. So, if you were to see something suspicious, your first port of call would be to the cabin crew. If you’re worried about someone hearing you, just write a note or ask them if you can speak to them in private. 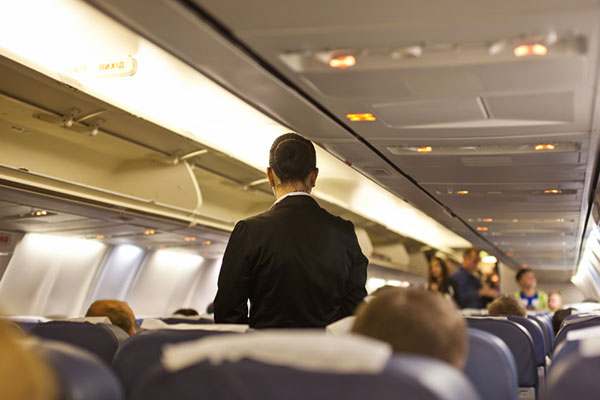 On the ground, the AFP is the primary law-enforcement operation at Australia’s major airports. If you think something dodgy is going on, or if you require police presence, just pull an officer aside or call 131 AFP (131 237).

It also pays to keep in mind the minuscule probability of being involved in a terrorist attack and then, the chances of actually being a victim. According to The Conversation:

Now, that should put things into perspective.

And there’s a popular notion that we are afraid of risks that are new and unfamiliar, so much so, that we often overlook dangers that are much closer to hand, such as crossing the road or driving our cars.

I hope that helps, Brian. My advice is that you focus on how much fun you’ll have in sunny Queensland and remember that air flight is the safest mode of transportation. Even better would be to take a friend along, then you can relax and chat and forget your troubles.

Do you have a question for Leon? If so, email your Travel SOS to [email protected]