If the aviation industry was a country, it would rank among the world’s top 10 emitters of carbon dioxide (CO2). Aviation emissions have risen by 70 per cent since 2005 and as demand increases in rich and poorer countries, they’re forecast to increase by between 300 per cent and 700 per cent by 2050.

Arresting this incline will be the first step towards a sustainable system of international travel – but how could it be done? A frequent-flyer tax would be relatively easy to implement but it could mean the richest can still afford to fly while the poorest are priced out.

Most plane passengers are already relatively wealthy. Only 18 per cent of the world’s population have ever flown and in any given year, an elite three per cent of the world flies. That’s about 230 million people, but flights carried four billion passengers in 2017. So the average flyer takes eight return flights and aeroplanes rack up seven trillion air miles each year.

Rationing might be a fairer and more effective alternative.

Flight rationing
Every person could be allocated a maximum number of ‘flight kilometres’ each year. This allowance would increase the longer a person abstained from flying. The first year allocation would be 500km, then the following year it would be 1000km and would double every year. It would take seven years to accumulate enough to fly from the UK to Australia and back.

Buying a ticket for a flight of any distance would reset the allocation rate to year one, but the kilometres saved in a ‘flight bank’ could still be used. Anyone not travelling could exchange their flight kilometres for money, but anyone exceeding their ration could be fined or banned from flying for some time. 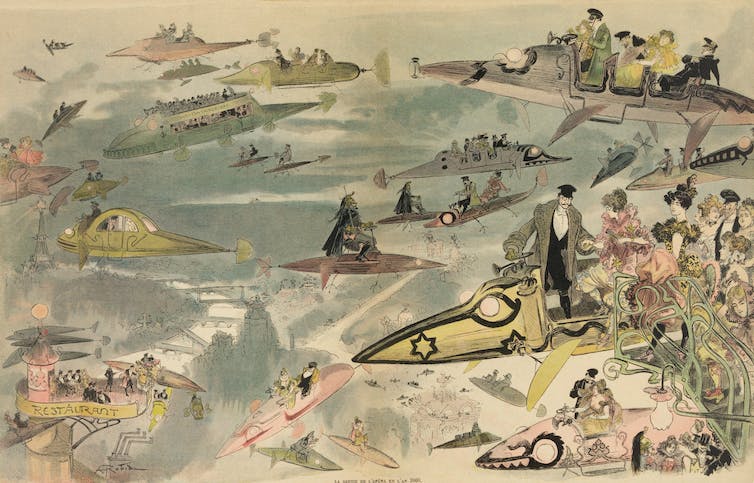 Expanded and improved high-speed rail lines could also replace many flights. These journeys could be as fast as aeroplanes in some instances and emit 90 per cent less CO2. Solar-powered train journeys are already a reality in Australia. The Byron Bay Company uses solar panels on trains and platforms to power onboard batteries and exported 60,000kWh to the grid last year.

Coupling low-carbon train travel with flight rationing would limit emissions in the short term, but people are accustomed to travelling half the world in a matter of hours, often at relatively low cost. The demand won’t go away, so what could replace carbon-intensive air travel?

Electric aeroplanes
Most electric plane designs are grounded on the drawing board, but there are some flight-ready aircraft. The world’s first all-electric commercial airliner was unveiled in Paris in June 2019. The craft is called Alice and it carries nine passengers for up to 650 miles (1040km) at 10,000ft (3000 metres) at 276mph (440km/h) on a single charged battery. It’s expected to enter service in 2022.

The fossil fuel costs of small aircraft are about US$400 per 100 miles. For Alice, the costs are projected to be as little as US$8 for the same distance, and if the electricity is from renewable energy – perhaps generated by solar panels at the airport – then the plane could be zero-carbon.

How much energy each battery can store is increasing rapidly. But there are also strategies that can make electric planes more efficient. Capacitors are lightweight batteries that can hold a huge charge but only for short periods. They could be used for take-off – the largest energy requirement of a flight – then more traditional batteries could power the majority of the flight.

Innovation could deliver mass electric flight in the next few decades, but an alternative to fossil fuelled flight exists right now.

Bring back the Zeppelin?
For as long as humans have taken to the skies we’ve had a low carbon alternative to burning vast amounts of fossil fuels to keep us up there – balloons. The Hindenburg disaster may have condemned the industry to relative obscurity for almost a century, but it has never really gone away.

The balloons of most modern airships are filled with helium rather than the explosive hydrogen used in the Hindenburg. Concentrated helium is lighter than air and when divided into gas sacks, the vessel can stay aloft if any are breached while propellers powered by flexible solar panels can help navigation. 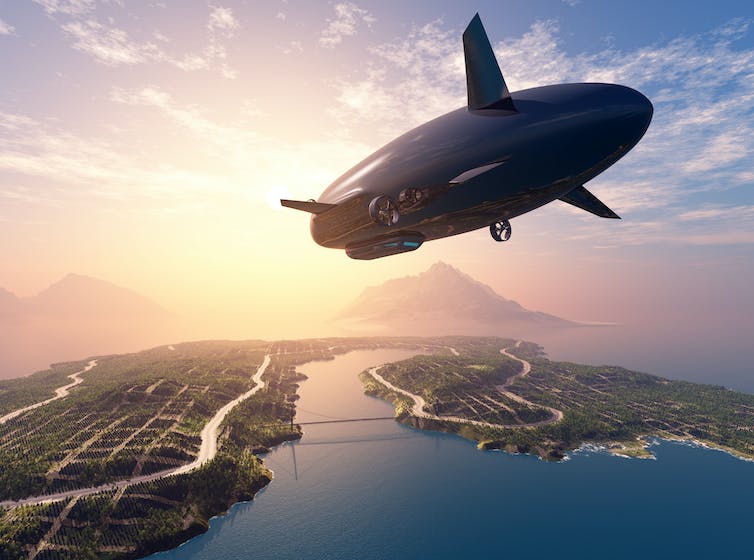 Airships travel slowly, but they could allow holidaymakers a beautiful view. Iurii/Shutterstock

Extracting enough helium fuel will be energy intensive and there’s a looming global shortage. Luckily, advances made since the Hindenburg now allow airships to fly on cylinders packed with hydrogen jet fuel, which is cheaper, lighter and relatively abundant.

Using hydrogen for fuel has become a lot safer since the 1930s – so much so that it’s now being considered for use in the home. Unlike jet aircraft, once airships are aloft they don’t need lots of energy to keep them there. At that point, the energy costs become comparable with rail travel.

Airships won’t get passengers to their destinations very fast – the Hindenburg set the current record for a transatlantic crossing at just under 44 hours – but they do allow time to enjoy stunning vistas. Think of them instead as air cruises. In the romantic era of early commercial flight, airships were expected to become “flying hotels” that could accommodate dining rooms and ballroom dances.

Orbital rings
There’s one more option, but you might struggle to believe it’s possible within the next 30 years. Still, the materials needed to build it already exist. An orbital ring is a strong steel cable in orbit just above the atmosphere – 80km above Earth. It rotates, creating forces that try to make the ring fly apart into space, while gravity tries to pull it down to Earth.

If the ring is spun at the correct speed, the two forces balance one another, allowing it to rotate seemingly weightlessly. A ‘cuff’ can be built around the cable, which would hold itself in place, unmoving, by magnetic repulsion. The structure would be connected to the ground by cables, with an elevator giving access to the ring in less than an hour. 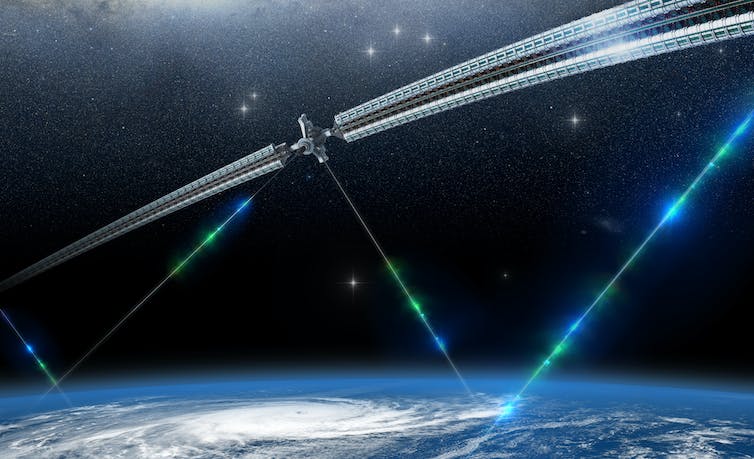 Once installed, the orbital ring could transport people across the world in under an hour. 3000ad/Shutterstock

Two Maglev train tracks – which use magnets to move trains along without friction – on the underside of the ring and another on the outside could transport passengers at incredible speeds, reaching the other side of the world in 45 minutes.

If these options sound unrealistic, then remember that our current course of expanding carbon-intensive air travel is unrealistic for avoiding catastrophic climate change. Bold ideas are one thing, we need radical action to revolutionise how we travel the world.

Is this the future of airline food?

Automated service areas on board planes could change the future of airline food.

The future of cruising: underwater lounges