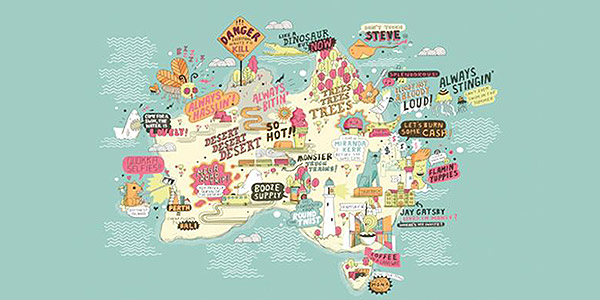 Many other nations are quite confused Australia’s geography. I guess you can’t really blame them for being so overwhelmed by our abundance of space – a foreign situation for the majority of the rest of the world.

And then there are those misconceptions that everything in Australia is out to kill you. You’ve probably seen some hilarious maps of our country with labels such as sting rays, sharks, scorpions, scorching desert, giant spiders, convicts, poisonous snakes, crocodiles, cyclones – and the list goes on.

Thankfully, Pedestrian has taken one for the team and commissioned a more accurate map of Australia. Created by illustrator-come-cartographer James Gulliver Hancock, the map focuses on the pop-cultural landmarks of our great nation. Such as Coffee and MONA.

Here’s the finished product and a video of James talking about how he approached the vast task.

What do you think? What pop culture reference would you pick to represent your state?

You can read more about the project at Pedestrian.