There are many things that you may think about before booking a hotel and jumping into the bed, but it’s unlikely this is one of them. While it wouldn’t surprise anyone that countless other people have slept in the same bed before them – when you put a number to it, it really takes on a whole new meaning.

A recent study has uncovered, if you will, that almost 2000 people will sleep in the average hotel bed before you do. After examining hotel occupancy statistics for the past seven years, Furniture Choice discovered that, on average, 1891 people have slept on the same mattress before your room key hits that door.

Experts at the Sleep Council recommend that you change your mattress every seven years to avoid it becoming uncomfortable and unhygienic, but how often do hotels change theirs? One ‘head of housekeeping’, at a leading UK hotel chain, said, “On average we change our mattresses every five to seven years depending on how busy the hotel is; but we never leave it any longer, as by then the mattresses are ruined.” 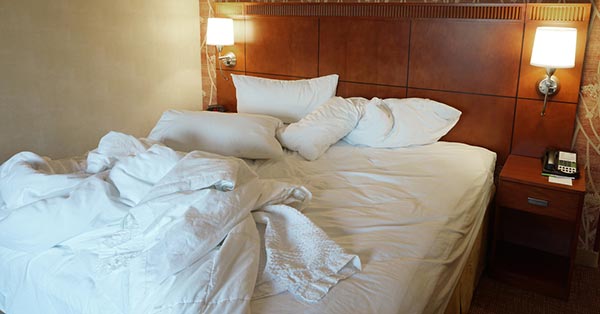 Adding, “There are some instances that require us to replace a mattress immediately, such as when someone soils the bed – urine permeates through a mattress, and in some cases we have seen it leak through the base and onto the floor! Dust mites can also be an issue, as they feed off dead skin cells thus making bed mattresses a prime habitat for them to live in. This is why it is important to protect a mattress with a cover to prevent infiltration.”

If the thought of the above isn’t enough to have your skin crawling and give you a sleepless night, the survey also found that nearly one in four of the respondents admitted to sleeping naked. Which, according to our calculations, means that an average of 537 naked bodies have slept just a sheet away from your hotel mattress… BYO sheets from now on?

Do these statistics surprise you? Do you ever take any extra precautionary hygiene measures when staying in a hotel or accommodation that isn’t your own home?

Related articles:
Hotel extras you actually need
Here’s how to book your next hotel
How to sleep well during a flight

Hotel extras worth their weight in gold

What should you really look for in a hotel?

Here’s how to book your next hotel

Hotel Tonight is turning the travel industry on its head and for good reason too.