The coronavirus pandemic is already affecting Australians’ daily travel, with suspension of public transport services a possibility as the number of COVID-19 cases grows. A common goal underpinning containment strategies in pandemic-like conditions is that the impacts should be borne as equitably as possible across the community. So would a public transport shutdown in Australian cities hit lower-income households harder than their higher-income counterparts?

In many countries this would certainly be the case. In these countries, public transport is largely the domain of the lower classes while wealthier households enjoy the comfort and convenience of their cars.

Read more: To limit coronavirus risks on public transport, here’s what we can learn from efforts overseas

Why the worry about public transport?
The interiors of trains and buses, and stations and stops along the network, are the perfect environment for a droplet-spread disease like COVID-19 to thrive. Masses of people congregate in these areas, increasing the risk of direct contact with an infected person.

About 1000 passengers can crowd into a single train carriage. This greatly increases the virus’s potential spread through droplets if an infected person coughs or sneezes.

And the handles and seats inside trains and buses, and other surfaces such as escalator handrails at stations, are prime surfaces to host infectious nose and throat discharges. According to new research, this virus can live on surfaces for hours to days. 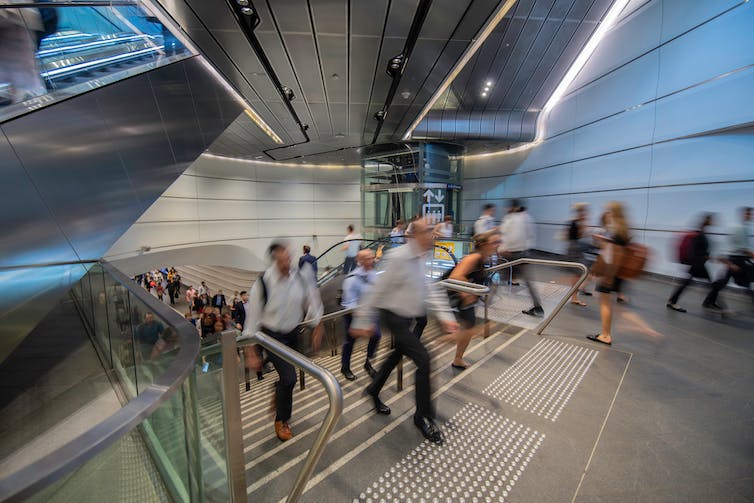 Handrails on escalators and stairs at stations used by tens of thousands of people a day are prime surfaces for harbouring virus particles unless regularly and thoroughly disinfected. Holli/Shutterstock

But the actual evidence is weak

Although public transport shutdowns are common in most contagious virus response plans, evidence of a relationship between public transport use and respiratory infection is actually relatively weak.

The most commonly cited study is based on the travel patterns of 72 people in London presenting for treatment of flu symptoms in 2008-09. It found those using public transport were up to six times more likely to pick up an acute respiratory infection than those who don’t.

This study also found, however, that regular public transport use was associated with less likelihood of contracting an illness. This was potentially because regular users develop protective antibodies to common respiratory viruses if repeatedly exposed. Unfortunately, this safeguard does not apply to a novel virus such as the COVID-19 coronavirus.

Those most at risk in this study were commuters who used busy stations, basically because they come into contact with more shared surfaces and people. In Sydney, for example, Central, Town Hall, Wynyard and Parramatta stations are potential hotspots. In Melbourne, Southern Cross, Flinders Street, Melbourne Central and Parliament stations head the list.

Who would a shutdown most affect?
A wider cross-section of the Australian population owns and uses cars than in many other countries. Cars are not the domain of the wealthy. Rather, they are a necessary expense to navigate life in our low-density, poorly serviced cities. Car use dominates the outer suburbs where housing is more affordable.

Australians pay a premium to live near quality services including public transport. Lower-income groups are priced out and live in suburbs that are more poorly serviced by public transport.

In Melbourne, for example, 61 per cent of the most socially and economically advantaged population live within five minutes’ walk of quality public transport services, compared with just 41% of the least advantaged. If you are one of the richest 20 per cent, you are more likely to be able to walk to good public transport than anyone else in Australia.

Particularly in our larger cities, higher-income people are more likely to use public transport to get to work, as the table below shows. In Sydney, for example, 33% of high-income earners commute by public transport, compared with just 25 per cent of those on lower incomes.

How might people handle a shutdown?
The data seem to suggest the impacts of a public transport shutdown will be felt more keenly in the top end of town than in low-income suburbs. But those numbers say nothing about what alternatives people have.

High-income households are far more likely to own more than one car. They are also better placed to absorb the costs of driving to work, such as parking, petrol and tolls. They can drive if public transport shuts down.

Residents of inner-urban areas, where property prices are high, are also more likely to have a shorter trip to work. They may be able to replace a public transport trip with a walk or cycle.

We don’t know the extent to which different employment groups will be able to innovate and adopt remote working practices under these unusual circumstances. However, people who can currently work from home are more likely to be high-income, highly educated white-collar workers. Almost half of workers in the financial services sector and 32% of the telecommunications sector use public transport – many of their roles are relatively easy to convert to working from home.

Read more: Coronavirus could spark a revolution in working from home. Are we ready?

Remote working is not an option for most low-income workers in the services sector. They must travel to their workplace if they want to be paid.

If these workers do rely on public transport to get to work, they are less likely to have a spare vehicle to commute with. This leaves few options for these households, especially in Australia’s dispersed suburbs.

A related issue is the impacts of a public transport shutdown on the all-important healthcare sector. Again, Australian journey-to-work data suggest the impact would not be as dire as some international research suggests. On census day in 2016, just 9 per cent of Australia’s healthcare and social assistance workers travelled to work by public transport.

In general, the effects of COVID-19 will no doubt be borne inequitably by lower-income Australians. They are more likely to be employed in industries worst hit by the coming economic downturn. For low-income households that depend on public transport, a shutdown would rub salt in their wounds.

What will happen to you if public transport is shut down?

Related articles:
Australians wake to strict new laws
The end of travel as we know it
Australia closes it borders

Strict new rules announced, but even harsher measures on the cards.

The end of global travel as we know it: an opportunity for sustainable tourism

The end of travel as we know it could be an opportunity for a better way to travel in the future.

Australia closes its borders to all non-citizens

Closing the borders should prevent the influx of more coronavirus sufferers.