It’s easy to feel that air travel is futuristic enough as it is, but the world’s aviation engineers never stop thinking of new ways to send you hurtling through the sky in a metal tube.

Every year the Crystal Cabin Awards recognise the best concepts, designs and prototypes that could spell out the future of flying, and after a record number of submissions, the so-called shortlist currently stands at 105 separate entries.

Picking a winner and the prize-giving has been postponed, so here are a few of our favourites in the meantime, from communal sleep spaces to seats you can detach and wheel off the plane.

Coffee House Cabin, University of Cincinnati
A business class that’s actually set up for business, this impressively corporate cabin comes with revolving chairs and pop-up workstations that turn an otherwise conventional seating plan into something resembling a boardroom. So much for in-flight entertainment – this way, you can work off your jetlag in Excel. 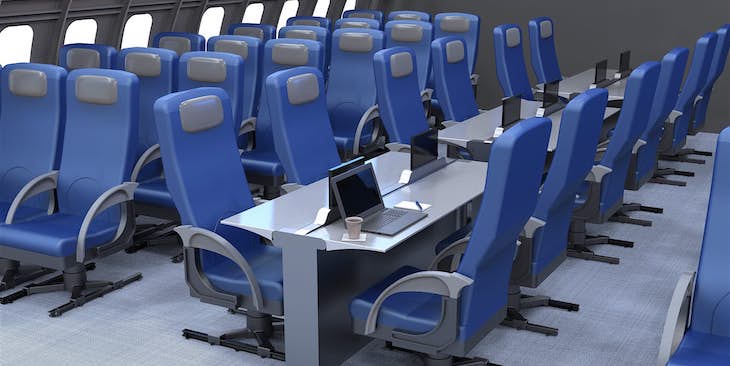 Zero-Economy Meal Tray, PriestmanGoode
Concerns over aeroplane sustainability often focus on the fuel tank more than the cabin, but this concept product is hoping to cut plastic waste as much as carbon. Formed entirely of edible, biodegradable, and compostable materials, this palette-pleasing prototype includes a base made of coffee grains and a coconut wood spork. 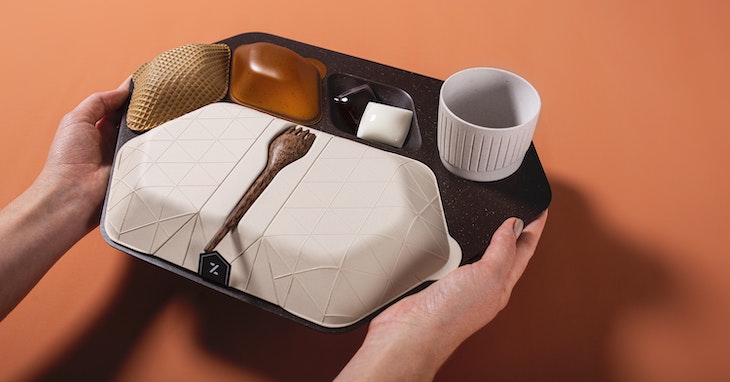 The Flex Lounge, Heinkel Group
A valiant attempt to making flying a little more sociable, the Flex Lounge uses rotating seats to form inward-facing blocks of four, much like those commonly seen in train carriages. Not advised for the long-legged, or those with a territorial approach to personal space. 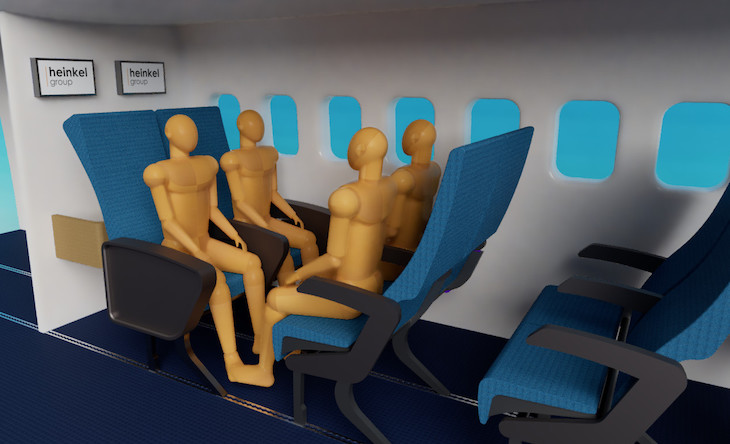 Transparent Class Divider, AERQ
One of several designs to tackle the unsightly grey walls erected to segregate the seating, this transparent, ultra-modern information display would look more at home in an Iron Man movie than the front facade of economy. This way you can at least see the posh seats, even if you still can’t have any of the champagne. 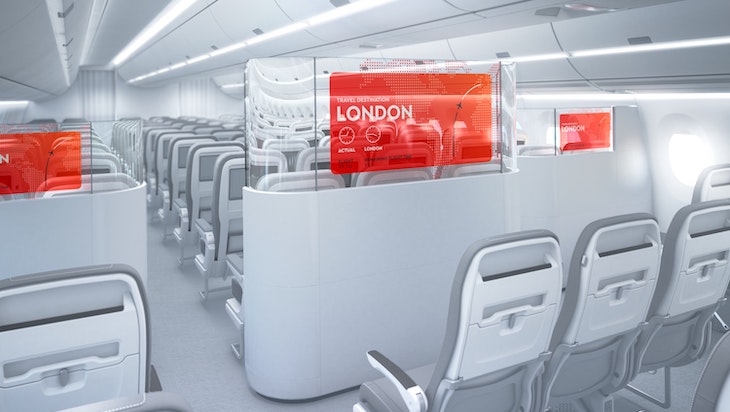 ROW 1 Airport Wheelchair System, Ciara Crawford
Irish product designer Ciara Crawford came up with a way of helping wheelchair users take their seats before they even get on the plane. After a solitary seat transfer in the airport, the ROW 1 latches to the floor of the craft, and remains there for the duration of the flight.

The Room, All Nippon Airways
A business class cabin inspired by “modern, multi-functional Japanese living spaces”, this seat/sleep pod aims to give passengers a room of their own at 30,000 feet. Fashion meets function with the wide, sofa-like design, and a seamless sliding door. 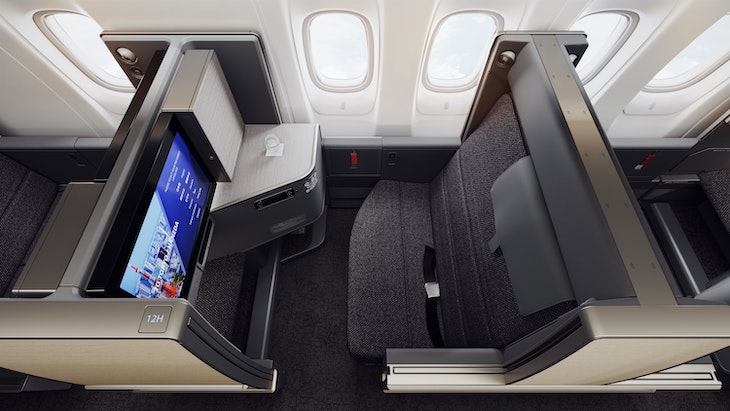 Cabin Vision 2030, Airbus
A fully integrated, digitally enhanced ‘flying experience’, the suitably grand-sounding Cabin Vision 2030 hopes to do for planes what household AI has done for your living room. Expect LED displays on the overhead lockers, individualised ambience lighting, and pre-programmed seat recline settings. Never at risk of aiming too low, if this project delivers even half what it sets out to, we’re in for a treat. 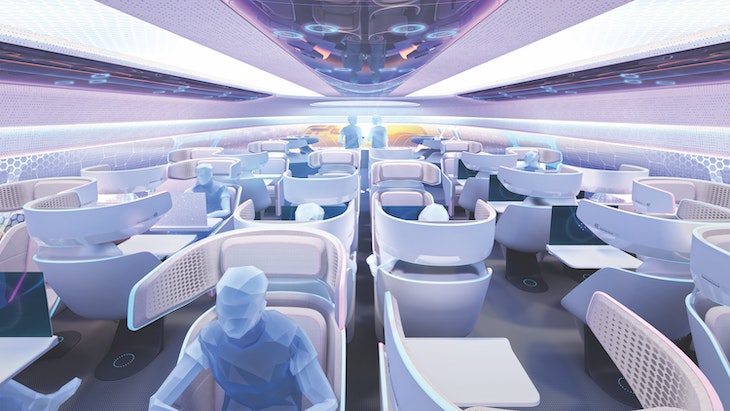 Delft Collapsible Beds, TU Delft
It’s perhaps the great, insoluble problem of long-haul flying – how to get to sleep in economy. Engineers at TU Delft are developing a three-storey bunk bed, designed to slot into a tightly packed grid not unlike a Japanese capsule hotel. During waking hours, the bottom bed folds into a three-man bench, while the middle bunk slides up to form a ceiling.

Space For All, Adient Aerospace
From legroom seats to bedroom seats, this family-friendly concept takes the coveted bulkhead row and transforms it into a 17 square foot shared sleeping space. When in bed mode, the central armrest can be lowered to provide a handy coffee table or work station. 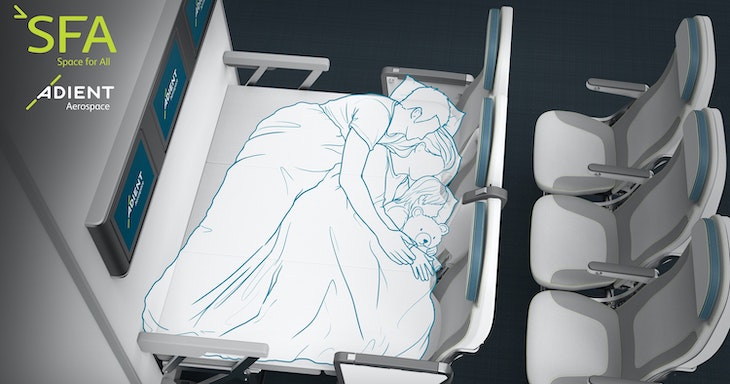 EarthBay, EarthBay
The stunning spectacle of soaring through the sky seems a simple selling point, and it’s surprising someone hasn’t seized on the plane-as-viewing-platform angle before. The air travel equivalent of a glass-bottomed boat, the EarthBay would provide premium seating at the rear of the craft, offering views out over the ether through what would otherwise be the cargo door. 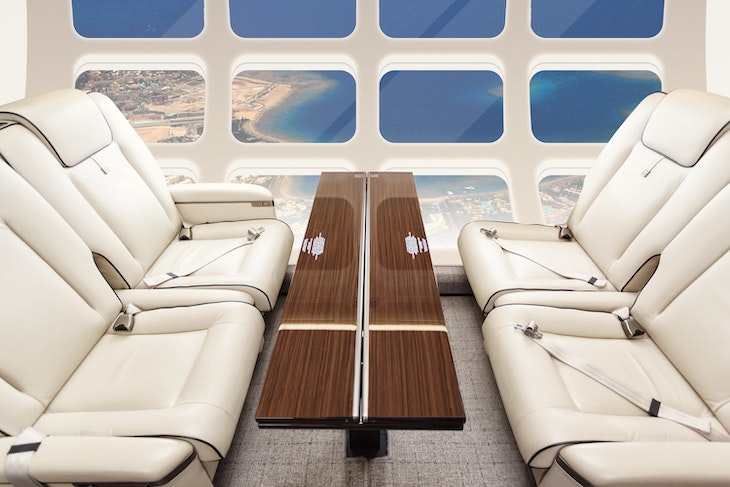 Which do you want to win?