It’s February and we’ve just completed another cruise. This time it’s across ‘the ditch’ and into New Zealand. With a group of friends, we flew to Auckland from Melbourne and picked up a 10-seater minivan for a seven-day land tour of the North Island, followed by two nights in Auckland. There was excitement about the next phase of our holiday: a 10-night cruise on The Royal Caribbean’s Radiance of the Seas, island hopping to six ports along New Zealand’s east coast and back home to Melbourne.

For me, the highlight of the cruise was the day we spent cruising some of New Zealand’s sounds and inlets. These are located along a 200km stretch of the rugged south west coast of the South Island. The 1.2 million hectares of National Park is known as Fiordland and was declared a World Heritage Area in 1986. 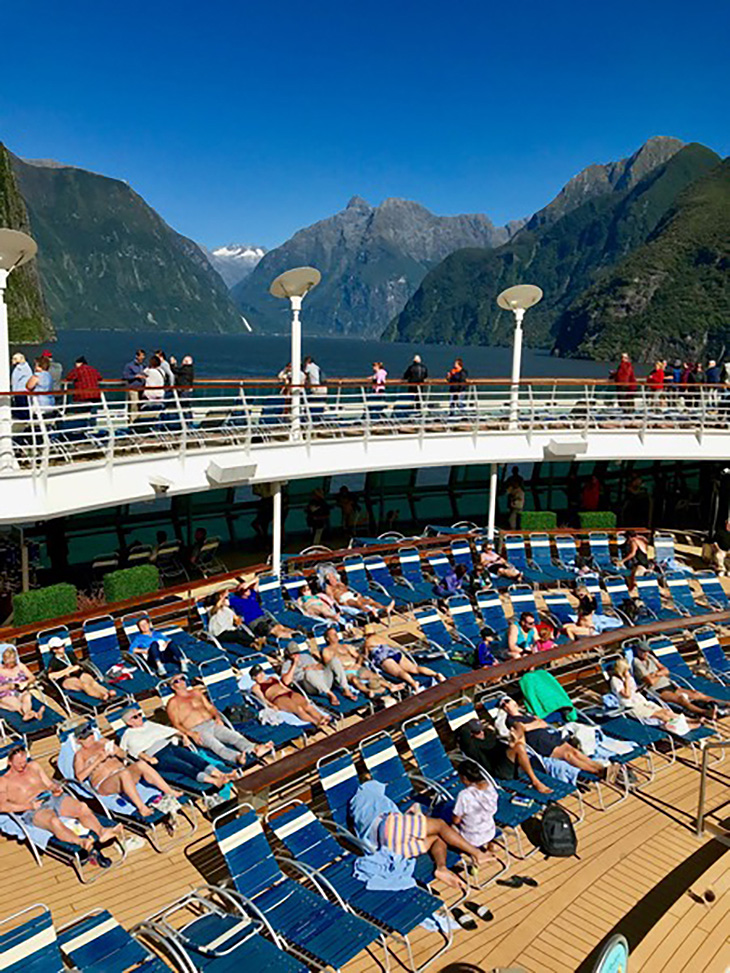 A sound is described by Wikipedia as a large sea or ocean inlet, deeper and wider than a fiord, which is a narrow sea or ocean channel between two bodies of land. So why did the Kiwis call the area Fiordland and not Soundland? My guess is because they could. There are 15 sounds in Fiordland and we visited five of them, the most famous being Milford Sound.

The massive rock formations were created over 500 million years ago when intense heat and pressure deep within the earth’s crust thrust the gneiss, schist and granite rocks upwards. Fast forward to two million years ago when glacial activity commenced and gouged out U-shaped  valleys to form the existing lakes and fiords.

Captain Cook and his crew were the first Europeans to visit Fiordland and in 1773 spent five weeks there. Soon after, the first European settlements were formed. There are several walking tracks in the area, including Routeburn, Kepler and the world-famous Milford Track, which opened in 1889.

Rain has been pelting down overnight, brought about by the Roaring 40s moist westerly winds that sweep into this region and are diverted upwards because of the steep and high mountains. The  resultant cold air condenses as rain and snow at an average of 200 rain days a year. This area can get up to nine metres of rain a year. Milford Sound is not only known as the wettest inhabited spot in New Zealand, but also one of the wettest places in the world. 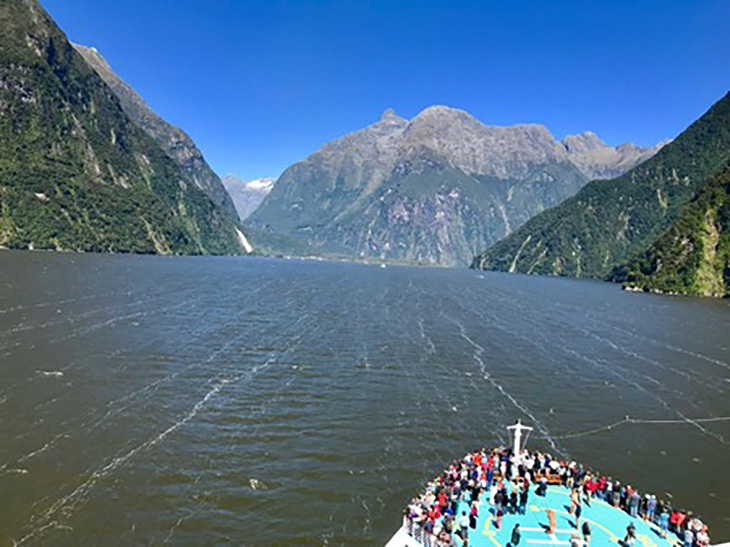 It has stopped raining, but it is partly overcast as we enter our first sound mid-morning – Dusky Sound, with its many small islands throughout. A little north is Doubtful Sound, with no direct road access. Its isolation makes this a special place and it is sometimes referred to as the ‘Sound of silence’.

We have struck it lucky today, because later the sun is bright and the temperature is in the low 20s for our venture into Milford Sound, at the northern end of Fiordland. Absolutely perfect! It’s easy to see why this sound attracts up to one million visitors a year. I’m up at the pointy end of deck 12 and looking out onto this amazing scene.

There are many waterfalls cascading down the mountains because of the overnight rain. I estimate some of these waterfalls to be up to 1000 metres in length. The sheer rock mountains project up to 1700 metres vertically out of the water. Most are covered with dense forest foliage, which clings together by an intertwined root system. The water depth is over 400 metres.

The clear blue sea salt water is obscured by a one metre deep fresh water run-off layer, which is stained a murky brown from the tannins in the vegetation. The difference between the clear emerald sea and the murkier fresh water layer is evident when watching the ship’s propellers churn through.

An expert has been brought on board to tell us all about this area. Hamish’s fabulous narration throughout the day is informative and humorous.

“It’s hard to get a perspective of the size of things here,” he says. “That permanent waterfall (Stirling Falls) you see on the port side is the height of a 50-story building.”

What, no way! I look above it to the peak of Elephant Mountain, which I estimate is at least 10 times higher.

Hamish’s analogy really does make it clear how big these rock formations are. He also jokingly refers to the swarms of midges in the area. 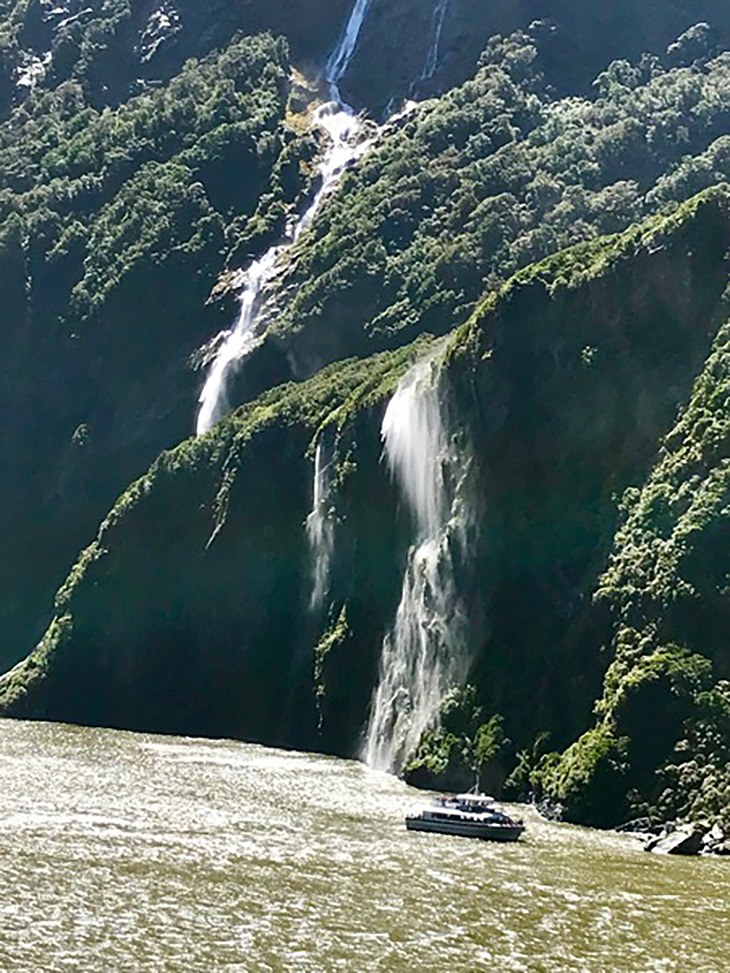 “I hope the ship doesn’t stop, because the midges following us will catch up and eat you alive. It’s best to be at the front of the ship,” he jests. “Because those at the back will be taken first.”

It so happens that some of those little beasts must have hopped onboard, because I was set upon (I did go to the back of the ship). Painful itchy bites – ouch! Apparently, it’s only the female that bites – requiring a dose of protein blood to produce her eggs. I’m not happy that my blood will be used to create a family of more blood sucking female midges. A week later and I’m still scratching!

The ship slows for us to take in this magical scene and does ‘a 360’. From the bow I am looking vertically upwards at the towering 1700-metre Mitre Peak, which Hamish casually mentions he has climbed a couple of times. No way, Jose! I try to visualise a route up this rugged rock face, and my heart rate increases as I internally freak out. 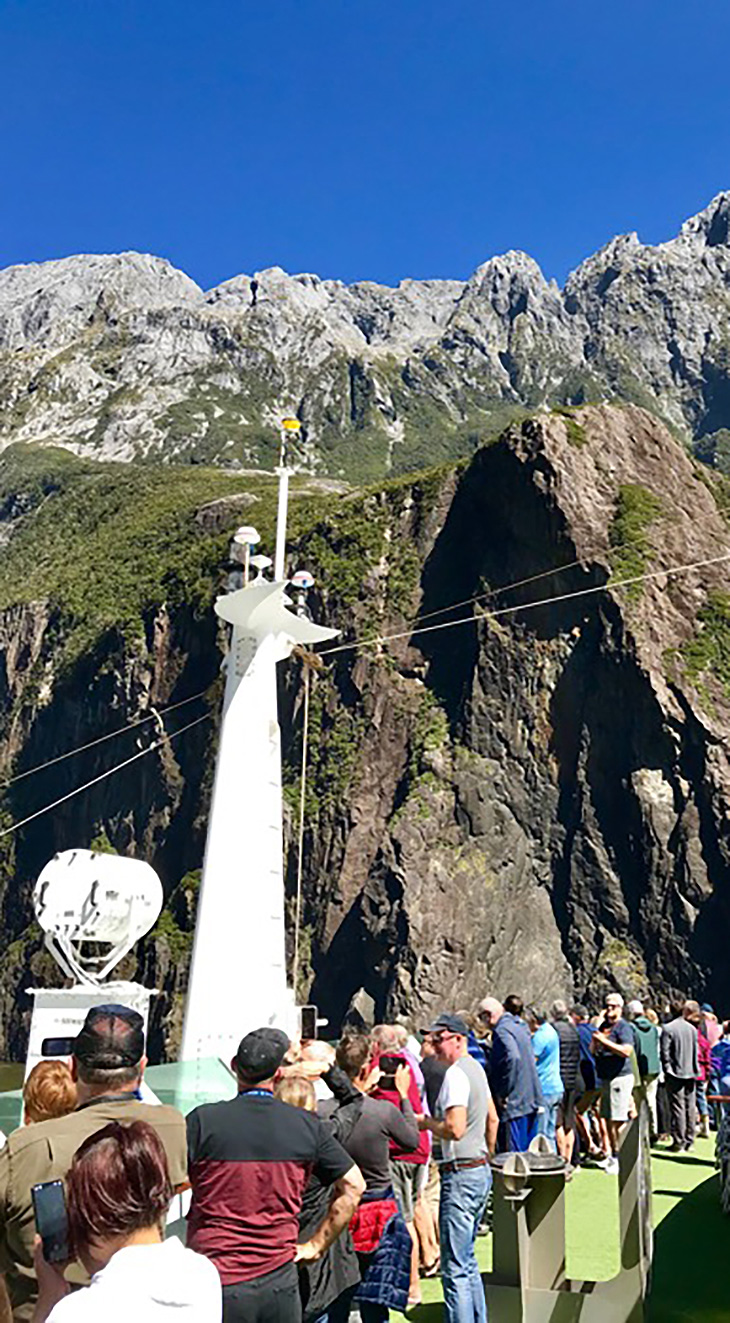 The ship has stopped (all aboard, midges!) and I realise that its aft is facing the waterfall. So, it’s a quick about face to the other end of the ship. Wow! We are a short distance from the falls. People are squeezed together along the railing and their cameras are getting a real workout. I have a vision of their relatives at home wincing at the subsequent slideshow invitation.

We continue to the head of the sound, where the famous Milford Track starts. There’s lots of  activity here because with perfect weather and visual flying only, the window of opportunity is open for flights, as well as many small tour boats. The small air strip is buzzing with activity – small fixed wing planes and helicopters taking off every couple of minutes, or so it seems. I watch one heading into a rock face – when will it turn? Turn now, turn now! But the plane continues for what seems an eternity, and when I think it should have crashed by now, it finally turns across the face of the mountain. Such is the deceptive nature of the scale of things here.

It’s picture perfect near the end of this sound. Imagine a waterfall (the permanent Lady Bowen Falls) to the left, mountains all around and in the distance, a glacier. Stunning! It’s said a picture paints a thousand words. Well, part way I reckon, because a photo could never capture the sheer scale and beauty of this place. 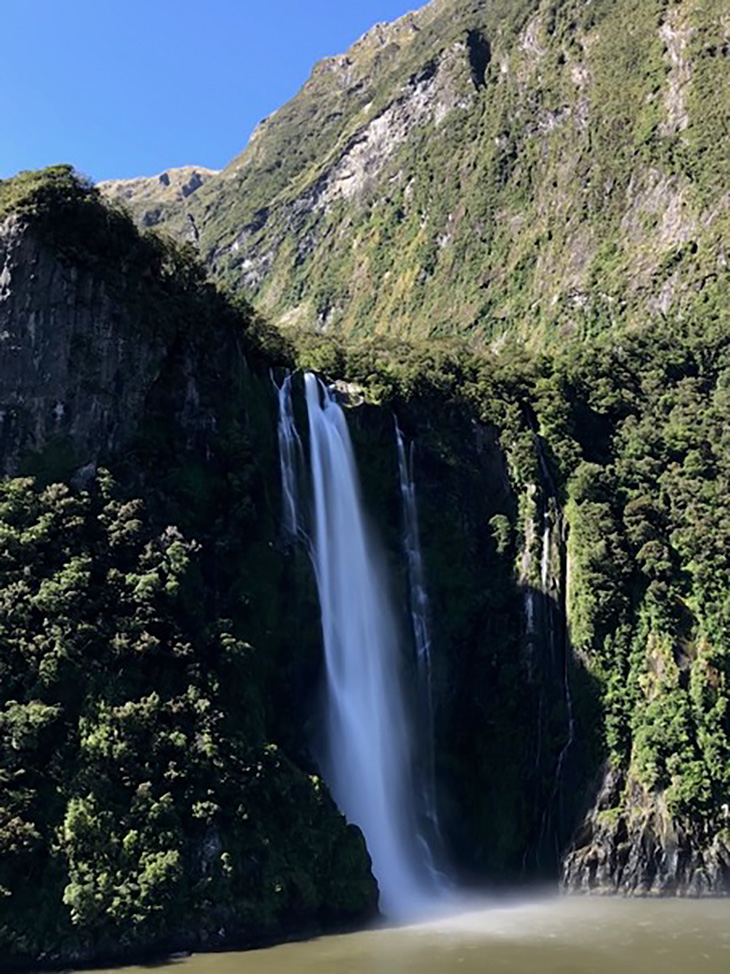 It’s late afternoon as we head back and out of Milford Sound to the Tasman Sea. It takes two sea days to get back to Melbourne across the occasionally rocky ditch – the bags are out, folks! There is plenty of time to contemplate our experiences over the past three weeks. For me, a standout highlight was cruising the sounds, in particular, Milford. I want to go back!