The idea that we should decentralise our population has come up many times in Australia. Recently, the National Farmers’ Federation president pushed the notion, calling for a shift to the regions. And the premise is this: city living is unpleasant. Roads are jammed, housing is expensive and it’s all so much nicer out in the country. We need to ‘spread out’.

We reject this conclusion. Regional centres certainly must play a role in accommodating our population growth, but for now it’ll be a modest role.

The more immediate need is to focus on improving conditions in our major cities. Our smaller towns matter, but we can’t neglect the urgent need to get better at doing the bigger ones right.

Our cities are growing very rapidly. The fastest growth is in Melbourne, which added 119,400 residents in 2017–18. That’s nearly as many extra people as the entire population of Darwin in a single year. This rapid growth doesn’t need to mean more traffic, ugliness or stratospheric housing prices and rents – if we confront a difficult truth.

Urban density targets remain low in planning policies for many states. It’s often set at around 15 dwellings per hectare. In practice, even lower density is delivered.

Australians tend to think of density as living in high-rise tiny apartments. Drop the ‘d-word’ at your local pub and see how the term ‘shoebox’ or ‘vertical slum’ quickly follows.

The irony is that the very thing that makes a getaway to central Paris or Barcelona so attractive is what many Australian city residents revile at home. The places we visit and admire are really quite dense.

It’s higher-density living that makes their streets and public spaces buzz. But, importantly, this density is achieved through a combination of well-designed mid-rise apartments (roughly six storeys) close to shops, services and public transport. This gives residents the best of both worlds: cities that are liveable and likeable. 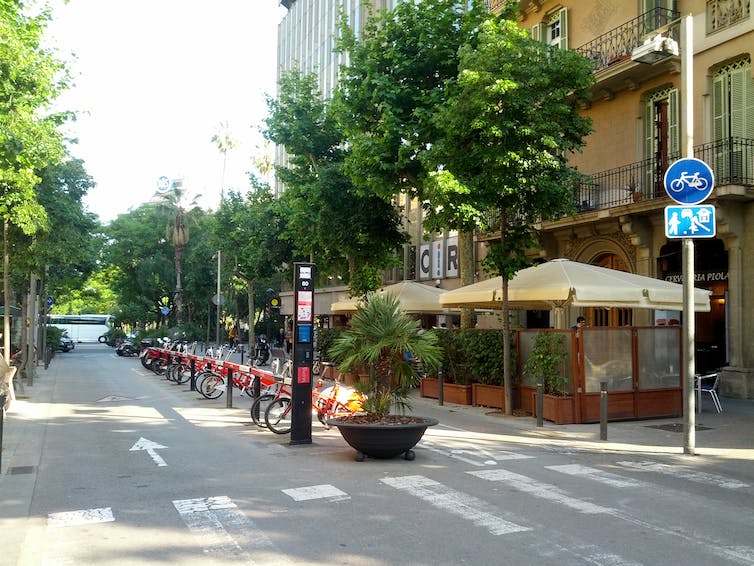 A Barcelona streetscape with bike racks: a picture of high-density liveability. Eric Fischer/Flickr, CC BY

Read more: This is what our cities need to do to be truly liveable for all

A failure of planning
Past failed experiments in density have made it difficult to replicate overseas examples locally. The great Australian dream of owning a quarter-acre block and the stigma around density persist with reason. In Melbourne, for example, rapid high-rise development in the last decade has delivered large numbers of very small apartments, in some cases of poor quality and lacking natural light and ventilation.

Very modest investment in public transport makes things worse, as new residents try to cram onto services that haven’t kept pace with growth. Car parking, however, is usually mandated. These planning rules mean the price of new apartments includes the expense of multiple floors of parking, and streetscapes are peppered with vehicle crossover ramps.

Without adequate public transport, roads fill with cars, stoking resident opposition to further infill development. The roads and parking these cars need occupy valuable space, which could be better used for trees and urban greening. Green space is often overlooked in the haste to accommodate rapid population growth, yet it’s essential for community health and wellbeing and for reducing urban heat island effects.

Handling population growth doesn’t require us to move to Tamworth or Toowoomba, but it will require some really important changes in our urban development priorities. There has to be a much stronger focus on quality and aesthetics to win back public support for infill development. It’s also going to take commitment to lift density targets in key planning policies.

Plan Melbourne’s 2017 refresh, for instance, has moved to a goal of “over 20 dwellings per hectare”. It follows the recommendations of research in allowing higher densities in high-activity areas such as activity or town centres. However, it will take time to implement this change in existing and new areas across the city.

Density must be complemented by suitable streetscapes and infrastructure. This will require a significant rethink of the role of the car in urban areas, greater investment in public transport, and a reallocation of large areas of streetscape space to greenery and pedestrians.

That’s a big ask, but it’s worth it, because density really doesn’t have to mean ‘dogbox’.

Dutch show change is possible
Take a (digital) walk around a woonerf neighbourhood in the Netherlands and you’ll notice on-street parking is scant, the speed limit is around 15km/h and plentiful road space is allocated to tree planting and garden beds. Kids play in the street under the watchful eye of long-term locals. You don’t notice the dense apartments around you because there are trees in the way and there’s a lot to see at ground level. 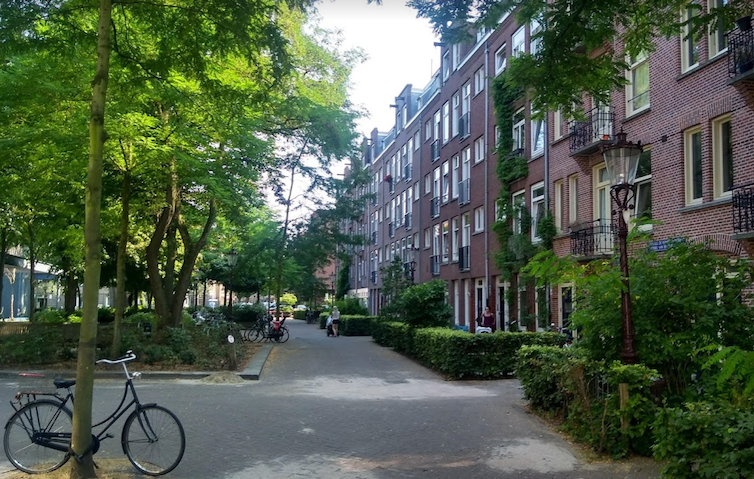 A woonerf (Dutch for ‘living area’) in Amsterdam. We estimate this area has a residential density of over 100 dwellings per hectare. Thami Croeser

Remarkably, it was only in the 1970s that the Dutch started to move away from car-oriented planning to deliver this kind of urban design, which puts people and place first. With courageous policy change, we could have this in Australia too.

Life on a Dutch woonerf.

Do you think there’s still hope for densely populated cities? Would you be more inclined to travel to quieter cities post-pandemic?

Aussie travellers trying to do their bit to tackle overtourism

How travel must change post-COVID

Is COVID the perfect storm for sustainable change in the travel industry?

Locals have a love/hate relationship with tourism. Is there a way to make them happy?

Travel-related consumer complaints have risen by 500 per cent since January 2020, with thousands of Australians unable to get refunds...

When Barb Spriggs found her husband lying on the ground of the Oakden aged care facility with two nurses standing...

How do different painkillers work?

It's easy to assume the only difference between painkillers is their strength. Or that any painkiller you can buy without...

"If you have to be up early and you need something speedy, this is the perfect go-to breakfast," says Bake...

It starts with the fundamentals: adequate staffing, adequate food

There have been 22 public reports and inquiries related to publicly funded aged care in Australia since 1997. Will this...