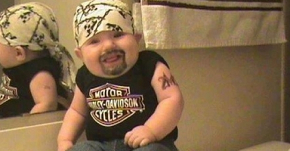 Singer Beyoncé and her partner, rapper Jay-Z have lost a court case for the right to trademark the name of their one-year old baby, Blue Ivy Carter. The couple said they wanted to protect the name as they were planning to ‘launch a range of baby products and clothes called Blue Ivy’ which would no doubt increase their already ‘substantial’ fortune of more than $1.1bn.

Meanwhile famous for being nothing but famous, Kim Kardashian is expecting a baby and planning to have Beyoncé and Jay-Z as the godparents. Celeb twitter is buzzing about the possible names she and partner Kanye West might choose for the unsuspecting infant.

Time magazine has released a list of the ten strangest names that celebrities have bestowed on their children, which includes Pilot Inspektor, Morrocan and Moxie Crimefighter. But the winner would have to be the child named Diva Thin Muffin Pegeen. What hope did she have as the youngest daughter of the late Frank Zappa? Her brother copped it worse – his name is  Dweezil.

Out of the celebsphere things are little quieter, with the ten most popular baby names in Queensland in 2012 being led by Jack, Cooper and William for boys and Ruby, Charlotte and Sophie for girls

Read more about the court ruling.

Top 10 most popular baby names in Queensland in 2012

As the lists of most popular baby names for 2012 are released, it is comforting to read the old fashioned Jacks, Charlottes and Sophies are winning the war against Tyyler, Fedora or Canberra as the name for a tiny infant in a pram. Call me old fashioned, but I am over the twisted, tortured names people bestow on their kids, almost as a way of drawing attention to themselves. And is it just me, or has anyone else noticed when a teenager gets into trouble, the names that are reported are often Roxy, Headbanger or Calcutta and not the plainer Johns and Joannes? As for the first couple of babydom, Beyoncé and Jay-Z (with a hyphen you see my point?) I think they have actually given birth to a brand and not a baby. So they are planning to market products and clothes based on their daughter’s name? Poor kid. Why didn’t they fast track and just do it without the baby? So it’s kind of amusing that their court case was thrown out, as the name is already owned by a wedding planner. One wit has noted that they should have named their daughter Patent Pending. So let’s hear it for the Jacks, Sophies and Charlottes whose parents probably want them for the love a child can bring and not the potential profits from the babywear range.

What do you think? Is Kaye being unnecessarily harsh? Or just a tad old fashioned?