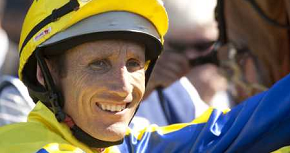 Last month, allegations emerged that star Australian jockey Damien Oliver had placed a $10,000 bet on an opposing horse in a race in which he was booked to ride. Earlier this week, Mr Oliver admitted to the charge and also to using a mobile phone in the jockeys’ room before the same race.

After the allegations emerged, Mr Oliver was removed from ride on Caulfield Cup hopeful My Quest For Peace (finished 5th). He in turn, demanded to be paid his fee if the horse won the Cup.

Over the course of the Spring Racing Carnival, Damien Oliver improved his record to 3rd position on the leaderboard of all time group 1 wins with his win on Happy Trails in the Emirates Stakes.

In a shocking twist, The Age wrote this morning that Racing Victoria Chief Executive Rob Hines knew before the Melbourne Cup that jockey Damien Oliver had confessed to placing an illegal bet. In the same article, Rob Hines lawyers have denied the allegations.

Read more from The Age.

As a sports fan, I have been extremely disappointed and embarrassed by the actions of some of my sports idols over the past few months. In what has been one of the most action packed and scandalous months for sports stars, it is amazing that only one AFL/NRL issue is amongst the furore.

Every year in June and July, I sit down at night to watch the epic bike road race, the Tour de France. In a sport where many riders have won large events and then been stripped of their titles due to failing drug tests, Lance Armstrong was the saving grace. With Lance being stripped of all seven of his Tour De France titles last month after allegations and evidence came to light from team mates that he was doping throughout his career, the whole situation has left a sour taste in my mouth.

Horse racing rarely makes the papers, but over the past month, several incidents have tarnished the reputation of the industry. While you may have only heard of Damien Oliver’s bet, another jockey, Blake Shinn, is being investigated for similar allegations. Add to that the fact that tubing equipment was found in the stalls of a favourite who ran during the carnival who subsequently lost and the fact that Oliver was allowed to ride in the Melbourne Cup, the integrity of the industry is in tatters. The straw which is sure to break the camel’s back is the announcement today that legendary jockey Frankie Dettori who rode in the Melbourne Cup last week, failed a drug test in France almost two months ago.

AFL forward Kurt Tippet and the Adelaide Crows Football Club have been front page news in Adelaide and Melbourne this week for all the wrong reasons. Mr Tippett was offered money under the table in his 2009 contract which was accepted. Mr Tippet now faces the possibility of a suspension from the game, while the Crows could face a more severe punishment.

Harsh punishments should be handed down to anyone who brings the integrity of any of these sports into disrepute. As long as the punishments for cheating are minimal, there will always be someone trying to beat the system.